Jihadis in Syria want to exploit the Syrian regime’s preoccupation with Russia’s war on Ukraine to open new fronts, while the Syrian opposition cheers for Ukraine. 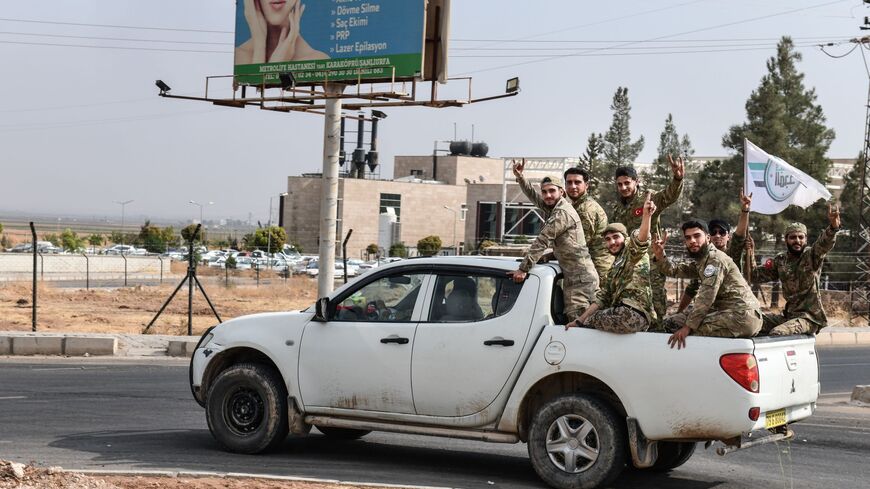 Members of the Turkish-backed Free Syrian Army wave on top of a vehicle as they drive back to their base camp on Oct. 16, 2019 in Akcakale, Turkey. - Burak Kara/Getty Images

ALEPPO — Syrians in the opposition-held northwestern areas are keeping a close eye on the Ukrainian resistance against Russian forces, hoping the Russian army will be defeated.

Voices have emerged among the Free Syrian Army (FSA) fighters calling for transit corridors to partake in the war alongside the Ukrainians. Meanwhile, Islamists and jihadis are trying to open battlefronts against the forces of the Russian-backed Syrian government and its allies, in a bid to exploit the government’s preoccupation with the war.

“How can I go to Ukraine and fight alongside the Ukrainian army, is there a way?” he asked on Twitter. “There is a strong will I am in Idlib now and ready to go to support the Ukrainian army. I want to help someone,” added Hamoud, who is said to have more than 100 confirmed hits of Russian-made tanks in Syria during the FSA battles against the government forces.

A military commander in the FSA in the countryside of Aleppo told Al-Monitor on condition of anonymity, “Millions of Syrians in the FSA-held areas in Idlib and the countryside of Aleppo, northwest Syria, are following the events of the Russian war on Ukraine. People are overjoyed with news of Russian army losses. They are thrilled to hear news of Russian planes falling in the skies of Ukraine and to see Russian tanks catching flames around [Ukrainian] cities.”

He added, “People in the opposition areas feel that the battle of the Ukrainians against Putin's army is their own. The same Russian war hardware bombarding Ukrainian cities today were and are still bombing Syria. They have been destroying our homes and killing our loved ones for years. The time has come for the Russians to pay the price.”

The source went on to say, “Our fighters are lured by the defensive means used by the Ukrainians. For 10 years now, they have been wishing to possess such defensive military equipment, such as anti-aircraft weapons and other defensive weapons that are amazingly hitting the Russian military hardware.”

Maged Abdel Nour, a journalist who resides in the FSA-controlled areas in the countryside of Aleppo, said on Twitter, “I dance to the sight of every destroyed Russian tank. These scoundrels killed us and destroyed our dreams and our future.”

In another Tweet, Abdel Nour encouraged FSA fighters to fight  alongside Ukrainians to promote the Syrian revolution.

In turn, the jihadis opposing Hayat Tahrir al-Sham (HTS) in Idlib also seem to be rooting for the Ukrainians. They called on HTS, who they see as the dominant group against the government forces in Idlib, to resume battles against the Syrian government while Russia is preoccupied with the Ukrainian war.

Other jihadis mocked HTS as an organization that implements Russian agreements and truces and protects Russian patrols. Some say HTS would not dare to ignite the fronts.

Talha al-Masir, also known as Abu Shuaib al-Masri, an Egyptian jihadi who opposes HTS and lives in Idlib, lashed out at HTS for cracking down on jihadis for fear of allegedly angering Russia. “One of the most important lessons we learned from the war in Ukraine […] is that our nation’s problem is not in the strength or weakness of our enemy, nor in its free time or preoccupation, rather it is the hypocrites of our own kind who stand between the nation and the jihad,” he said on Telegram.

Meanwhile, HTS and its supporters in Idlib are keeping a close eye on Ukraine. HTS is not hiding its support for the Ukrainians, but it is resisting the jihadis' demands to ignite the battlefronts with the Syrian government. HTS feels the time for such a move has not come yet, and wants to wait for the Russian army to get more involved in what it called the “Ukrainian quagmire.”

Sheikh Ayman Haroush, who is close to HTS, said on Telegram that the statements denying the links between Syria and Ukraine are very strange. He believes “Russia’s defeat in Ukraine would quench the thirst for vengeance of every displaced person and every destroyed city.”

Iraqi HTS leader Maysara bin Ali, better known by his nom de guerre Abu Maria al-Qahtani, said on Telegram that if a Muslim in Ukraine fights and defeats the Russians he would be rewarded, and if he gets killed he would be a martyr.

“Let us not rush into hasty conclusions about the Russians’ defeat in Ukraine. Opening the battlefronts against the regime at the present time may be a hasty decision rather than a strategic one,” Muhammad al-Sukari, a researcher in Syrian affairs based in Gaziantep, told Al-Monitor.

He argued, “Amid the lack of a Turkish decision, the opposition will remain committed to Turkey's understandings with Russia. In general, the consensus between the FSA and HTS on ensuring the stability of northwestern Syria may not represent their own view as much as it represents Ankara's. Should Turkey change its position, battles are most likely to erupt in the area.”

Sukari added, “If Turkey is offered guarantees and gains that are greater than those secured through its relations with Russia, it may take an unconventional step in northwest Syria. It needs first to be sure that Russia's strength is receding and the West is committed to weakening it.”