International air traffic has resumed at Aleppo International Airport, but it is believed to remain under the control of Iranian forces. 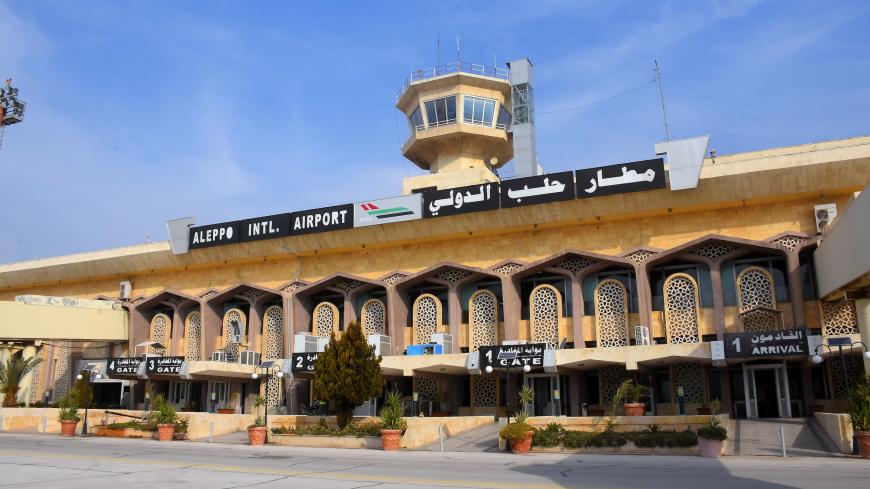 A picture taken on Feb. 19, 2020, shows a general view of the airport of the northern Syrian city of Aleppo upon the resumption of commercial flights. - AFP via Getty Images

“The resumption of flights to neighboring countries contribute to setting the wheel of the economy back in motion and restoring the glory of the touristic city of Aleppo,” Bassem Mansour, director of civil aviation in Syria, told SANA.

Air traffic had first resumed at the airport on Feb. 17, 2020, after an eight-year hiatus due to the war, with the arrival of the first domestic flight from Damascus. On Feb. 23, 2020, a ministerial delegation arrived from Damascus.

Commercial flights, however, were suspended again last year with the Syrian government citing the outbreak of the coronavirus pandemic. More than 13,600 cases have been registered in the regime-controlled areas so far, with 890 deaths and 7,121 recoveries, according to the Syrian Ministry of Health.

Aleppo International Airport is located about 5 kilometers (3 miles) east of the city. It serves the city of Aleppo and its countryside, an area seen as Syria’s economic capital. The airport, however, fell under the control of Iranian forces and their affiliated militias in mid-2012 after the Free Syrian Army entered Aleppo. Iranian forces turned the airport and its surroundings into an area of influence to transport their recruits and weapons to fight alongside the regime forces.

The Nairab military airport is located near Aleppo International Airport and had been also used by the Iranian forces, notably the 80th Brigade, as an air defense battalion for the protection of both airfields. The area witnessed fierce battles between the Syrian opposition forces and the regime and its allies from 2012 to 2016.

Despite the regime retaking control of Aleppo’s eastern neighborhoods with the opposition’s departure at the end of 2016, Iranian forces continued to hold both airports. The Iranian sites have also been subjected to Israeli airstrikes.

It is unknown whether the Iranian forces have now evacuated both airports and their surroundings and how the regime decided to promote the return of air traffic at Aleppo International Airport at this time.

Bilal Sattouf, a researcher who studies jihadi groups residing in the countryside of Aleppo, told Al-Monitor, “It is unlikely that the Iranian forces will abandon the Aleppo International Airport and the nearby Nairab military airport. Both airports are seen as important air bridges between Iran and Syria and are relatively far away from the Israeli border.”

“The resumption of commercial flights at the airport cannot be seen as demonstration of the Assad regime’s ability to restore stability in Syria. The airport is fully managed by Iran so far, with the Syrian government present just for appearances,” he added.

Younes al-Karim, a Syrian researcher and economic analyst who lives in France, told Al-Monitor, “Aleppo International Airport and the adjacent Nairab military airport located on the outskirts of Aleppo serve as a station and a gathering point for the Iranian forces and their allied militias. Through these two airfields, they transport their mercenaries and weapons from Iran to Syria. The Iranian forces cannot simply give up these gains.”

“Since it regained control over the eastern neighborhoods of Aleppo at the end of 2016, the Syrian regime has been trying to come up with a deal to ensure the resumption of operations at the airport. The Chinese may have been the preferred option for the regime, which is trying to reduce Russian-Iranian control over the Syrian state. Yet the offer did not seem to appeal to the Chinese,” he added.

“Aleppo is also seen as the industrial hub of Syria, and the improvement in activities gives an impression of an improvement in the economy as a whole, which attracts investment — an urgent need for the regime to save its ailing economy,” he added.

Karim explained that reopening the airport “is also a kind of courtesy to the components and minorities in Aleppo, such as Armenians and Assyrians. The regime is trying to convey a message that the most important vital facility is back in business, and another message to Turkey, Russia and the Syrian Democratic Forces that it has not given up on the northern part [of Syria], which is back under its control.”

Ahmad Abdel Qader, a political activist based in the northern countryside of Aleppo, told Al-Monitor, “Resuming operations at the airport at this timing is an attempt by the regime to send a message that it is on top of things, especially with presidential elections set to take place in a few months.”

“It appears that it is in the regime’s interest to have the Iranian militias out of its vital facilities so it alone can benefit from their financial returns. But in reality, the regime can do nothing to eject them. Iran, on the other hand, despite coming under pressure from all sides, continues to seep deeper into the fabric of the Syrian state and society through its militias and by commanding personal loyalties in many state institutions and positions in accordance with their importance to the Iranian project,” he added.

Abdel Qader does not believe Iran will completely withdraw its forces from the Aleppo airport despite the Israeli airstrikes.