The former journalist and UN ambassador has spent her career advocating for human rights around the globe. 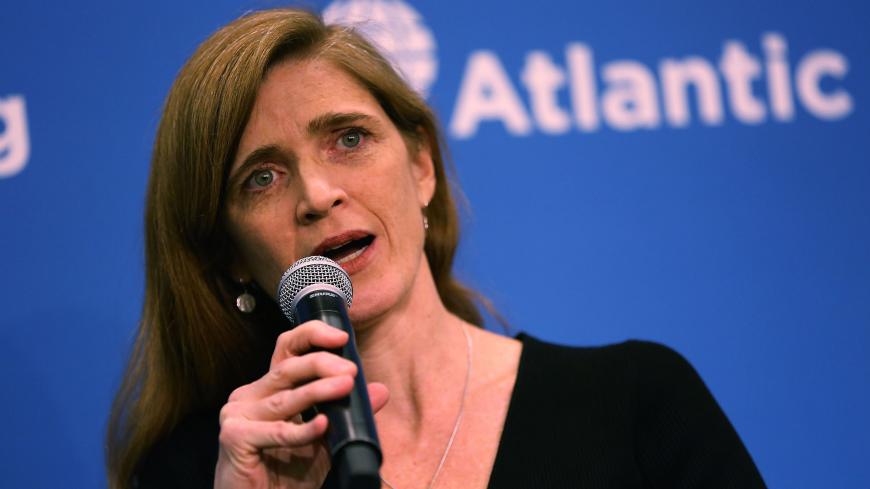 US Permanent Representative to the United Nations Samantha Power speaks during a discussion at the Atlantic Council on "The Future of U.S.-Russia Relations" on Jan. 17, 2017, in Washington, DC.

President-elect Joe Biden announced on Wednesday that he will nominate Samantha Power, the former US ambassador to the United Nations, to lead the United States Agency for International Development (USAID), citing her background as a crisis-tested public servant and diplomat.

In a statement, Biden described Power, 50, as “a world-renowned voice of conscience and moral clarity — challenging and rallying the international community to stand up for the dignity and humanity of all people.”

If confirmed, Power will oversee the US agency tasked with distributing billions in humanitarian assistance each year. After four years of an aid-skeptic administration that routinely sought to cut development dollars, the Biden administration is expected to view US assistance abroad as an important tool for advancing its foreign policy.

Biden also announced he would be elevating the position of USAID administrator to permanent membership on the National Security Council, a move long advocated for by the aid community and a sign his administration will make development a priority along with diplomacy and defense.

Power, currently a professor at Harvard Kennedy School, doesn’t have a traditional background in foreign aid and development. She served on the National Security Council in a role focused on human rights from 2009 to 2013 before President Barack Obama named her US ambassador to the United Nations during his second term.

Power began her career as a war correspondent reporting from Sudan, Kosovo, Bosnia, Rwanda and other conflict-ridden countries. She’s written for outlets such as TIME, The Atlantic and The New Yorker, and was awarded the 2003 Pulitzer Prize in General Nonfiction for a book she authored on American inaction to genocide.

Power and her family moved to Pittsburgh from Dublin, Ireland, when she was 9 years old, and she became a US citizen in 1993.

Power at the helm of USAID could put a greater emphasis on the importance of democracy and human rights in development, said Conor Savoy, executive director of the bipartisan advocacy group Modernizing Foreign Assistance Network.

“The US has always provided support in this area, but it’s often overshadowed by our investments on the global health side of things, education or other basic needs," Savoy said, adding that it's encouraging to see someone of Power's stature nominated for the role.

Power has long argued the United States has a “moral responsibility to protect,” telling the Senate during her 2013 confirmation hearing that when foreign governments are murdering their own people, “it’s incumbent on us to look” for ways to stop the carnage.

As the top US diplomat at the United Nations, Power butted heads with Russia over its vetoes shielding the Syrian regime from accountability for its attacks on schools and hospitals. “Are you truly incapable of shame?” she famously asked her Russian counterpart during a December 2016 Security Council meeting.

But Power also found herself at odds with the administration’s own Syria policy and Obama’s failure to enforce his “red line” for intervention after a chemical attack killed more than 1,400 civilians in August 2013.

“I did not think we could call the chapter a proud one in the annals of US foreign policy,” Power wrote in her 2019 memoir, “The Education of an Idealist.”

If confirmed by the Senate, Power’s Middle East agenda is expected to include restoring American assistance to the United Nations Relief and Works Agency for Palestinian Refugees (UNRWA), which Trump pulled all funding from in 2018. The UN agency has since been forced to scale back the services it provides amid what the UNRWA calls the worst financial crisis in its 70-year history. In November, Vice President-elect Kamala Harris suggested that aid to the Palestinians would be an early foreign policy priority, promising to “take immediate steps” to restore assistance and address the humanitarian crisis in Gaza.

War-torn Yemen is also likely to be high on the foreign assistance agenda. Last year, the Trump administration cut aid to Houthi-held parts of the country over concerns the Iran-aligned rebels were interfering with the distribution of food and humanitarian supplies. A former US government official who advised the Biden campaign on foreign policy told Al-Monitor that the incoming administration will likely move quickly to return aid to previous levels.

Power is the latest familiar face named to Biden’s national security and foreign policy team after having served in the Obama administration. His nominee for secretary of state, Antony Blinken, has worked alongside Biden for nearly two decades and served as deputy secretary of state under Obama.