Democrats and Republicans on the Senate Foreign Relations Committee had a fiery debate over the confirmation process, which touched on US policy toward Egypt, Israel and Lebanon. 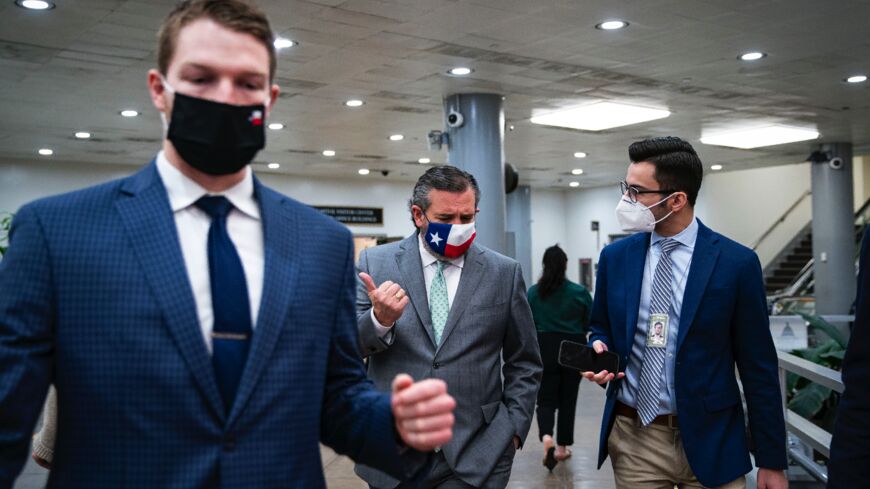 Sen. Ted Cruz (R-TX) (C) speaks with a reporter following a vote as he departs in the subway of the US Capitol on February 23, 2021, in Washington, DC. The Senate held confirmation hearings today for multiple Biden administration nominees as well as a hearing regarding the Jan. 6 attack on the US Capitol. - Al Drago/Getty Images

The US Senate Committee on Foreign Relations confirmed a Biden administration nominee for a top Middle East policy post on Wednesday.

The nomination of Barbara Leaf to be assistant secretary of state for Near Eastern affairs passed the committee at today’s business meeting. Leaf is a career diplomat who previously served as US ambassador to the United Arab Emirates, and is presently Special Assistant to the President and Senior Director for Middle East and North Africa Affairs on the National Security Council. Leaf will next face a vote before the whole Senate at a yet-to-be-determined date. Several other Biden nominations, including many ambassadorships, were also advanced by the committee.

Some Republicans voted against Leaf’s nomination, including ranking member Sen. Jim Risch of Idaho and Sen. Ted Cruz of Texas.

The vote was followed by a lengthy debate between Democrats and Republicans on the committee. The Democrats are increasingly frustrated with Cruz’s efforts to delay foreign policy-related nominations of the administration. Cruz has rejected the tradition of voting on noncontroversial nominees by “unanimous consent,” which allows nominees to pass without hours of Senate floor debate .

Cruz is doing this because of a disagreement with the Biden administration’s policy on Russia’s Nord Stream 2 gas pipeline in Europe. Most ambassador positions and many foreign policy posts, such as Leaf’s, remain unfilled nearly 11 months into Biden’s presidency.

Cruz defended his tactics at the hearing. He particularly voiced discontent with the Biden administration’s Egypt policy. In September, the administration withheld a $130 million portion of military aid to Egypt due to the country’s human rights record. One of the demands is the release of 16 political prisoners from detention. Cruz slammed the Biden administration for not releasing the names of the people they want to be released and said he has questions on whether they are tied to the Muslim Brotherhood.

“They can’t defend the names on that list,” said Cruz.

Cruz also claimed that the State Department directed employees not to use the term “Abraham Accords” to refer to the Trump-brokered normalization agreements Israel made with the United Arab Emirates. Cruz did acknowledge that some officials, such as US Secretary of State Antony Blinken, have used the term.

Many Democrats lamented the delays in the confirmation process at the meeting. Committee Chairperson Sen. Bob Menendez of New Jersey noted “Republicans’ obstructionism of critical State Department nominations” in a statement following the vote. During the meeting, he said the confirmation process has become like “pulling teeth.” Sen. Tim Kaine of Virginia said it is bad messaging that so many ambassador positions have not been filled.

“What a poor message that sends about US disinterest in the world,” said Kaine.

Cruz was not the only Republican to speak out against the nominees. Risch said Leaf is qualified for the position, but he criticized the Biden administration’s “seemingly openness to normalizing with the (Syrian President Bashar al-) Assad regime.” Risch cited US support for a plan to export Egyptian gas to energy-starved Lebanon. The plan stipulates sending the gas through Syria, which is under US sanctions.

The senators also discussed the nomination of Tamara Wittes to be assistant administrator of the United States Agency for International Development (USAID) for the Middle East. Her nomination is one of the batch being delayed, a committee aide told Al-Monitor.

Democratic Sen. Chris Murphy of Connecticut said it is unwise to refuse to hold a vote on Wittes, especially given the dire economic crisis in Lebanon.

“Think about Lebanon. It is literally falling apart where US aid is maybe going to be one of the few things to hold it together,” said Murphy. “We’re spending that money one way or another, so why would this committee delay?”

Murphy called Wittes “incredibly capable,” but Risch raised concerns about tweets she has made about committee members. In one tweet during the Jan. 6 US Capitol riot, she called Republican Sen. Ben Sasse “tone-deaf.” Referencing a 2017 hearing, she tweeted, “Sen Risch making us all wonder why he bothered showing up to this hearing.” A Senate aide sent the tweets to Al-Monitor.