Former UN Ambassador Samantha Power, who is nominated to head the US government’s international development agency, was asked about Yemen, Libya and Israel before the Senate Foreign Relations Committee. 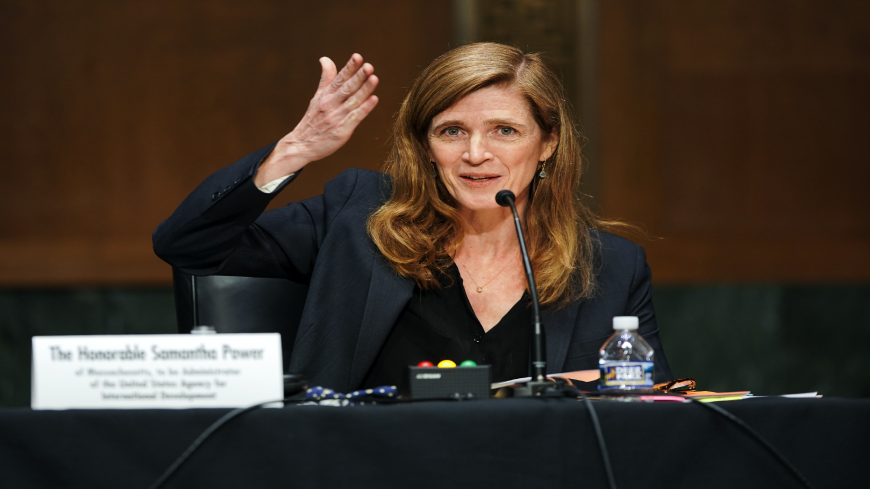 Samantha Power, nominee to be administrator of the US Agency for International Development, testifies at her confirmation hearing before the Senate Foreign Relations Committee on March 23, 2021, on Capitol Hill in Washington, DC. Power previously served as US Ambassador to the UN during the Obama administration. - Greg Nash-Pool/Getty Images

United States Agency for International Development (USAID) administrator nominee Samantha Power clarified her position on delivering humanitarian assistance to Yemen at the Senate today. She also addressed her record on Libya and Israel.

Power, who served as US ambassador to the United Nations and on the National Security Council under former President Barack Obama, went before the Senate Foreign Relations Committee on Tuesday. She was nominated by US President Joe Biden to head USAID, which is responsible for the US government’s foreign assistance and development projects around the world.

Yemen, where the yearslong civil war has produced a humanitarian catastrophe, was raised by Senators at the hearing. The Yemeni government, backed by a Saudi-led coalition, is fighting the Houthi rebels, who receive support from Iran. The previous administration of US President Donald Trump designated Houthi forces as terrorists before he left office in January, but the Biden administration removed the designation in February due to concerns the designation would inhibit aid deliveries to Houthi-held territory.

The Biden administration also restored humanitarian aid to Houthi areas in March. The Trump administration previously suspended the assistance due to concerns Houthi forces were interfering with the distribution.

Republican Sen. Ted Cruz of Texas asked Power if Biden removing the terrorist designation on Houthi forces worsened the situation in Yemen and about the role the Houthis and Iran have played in the crisis. In response, Power said the United States needs to recognize that Houthis govern much of Yemen’s population when determining how to help the Yemeni people.

“[The Houthis] have used food as a weapon of war. I’m on record condemning Houthi actions,” she said. “I think the challenge is the vast majority of Yemenis live under Houthi control at the moment.”

“It’s really important given that that’s the world’s largest humanitarian catastrophe right now that we find a way to get food to those vulnerable people,” said Power.

Later, Republican Sen. John Barrasso of Wyoming asked Power to directly answer Cruz’s question on whether removing the Houthi terror designation made the situation in Yemen worse, but Power declined to answer.

“That’s an empirical question. I don’t have an answer to the question,” said Power.

On other Middle East issues, Democratic Sen. Chris Murphy of Connecticut pressed Power to encourage USAID personnel to work in the field more as opposed to solely within embassies. Murphy noted the small number of USAID officers in Iraq in particular.

“We’ve significantly downsized our embassy in Baghdad,” said Murphy. “All over the world, we’re having difficulty getting our diplomats and our economic development officers outside of embassies.”

Power noted during the hearing the difficulties USAID faces getting people on the ground. She pointed out that USAID is currently not operating in Libya but usually works on the North African country from neighboring Tunisia due to “security conditions.” She said the agency “can be very important” in Libya and noted with approval that “a power-sharing government has finally been set up in Libya,” referring to the Libyan unity government that took office this month following the cease-fire.

Power was also pressed by Cruz on her Israel record, including the Obama administration’s decision to abstain from a vote on United Nations Resolution 2334, which declared Israeli settlements in the West Bank illegal while Power was UN ambassador. The United States has historically vetoed such resolutions targeting Israel.

Power said she worked to fight for Israel at the UN and helped get Yom Kippur, the Jewish day of atonement, recognized as a UN holiday to this end. On the resolution, she said Obama opposed the settlements but disagreed with some UN positions on Israel and therefore decided to abstain.

“It is a resolution in keeping with President Obama’s desire to encourage the parties to avoid unilateral steps including … the building of settlements,” she said. "The reason President Obama decided to abstain was, by and large, the venue because the UN has been so biased.”

Senator Rand Paul of Kentucky also criticized Power over the 2011 NATO-led intervention in Libya, which she advocated for while on Obama’s National Security Council. The United States and its allies provided air support to Libyan rebels fighting forces loyal to then-President Moammar Gadhafi, which led to Gadhafi being removed from power and killed. Gadhafi was carrying out attacks against civilians at the time. Libya remained in a state of conflict for several years following the intervention until the cease-fire last October.

“Would you acknowledge Libya is worse now than before we started bombing them?” asked Paul.

Power did not say Libya is worse off, instead saying “we don’t have the counterfactual” alternative history of Libya had the United States not intervened, calling the aftermath of the intervention “hard on the Libyan people.”  She did advocate using “non-military tools” to help countries like Libya and said she has opposed some US wars.

“I certainly agree that non-military tools in the toolbox carry with them far fewer risks. I opposed the war in Iraq,” she said. “When these situations arise, it is a question almost of lesser evils. The choices are very challenging.”