The case of Russia opposition figure Alexey Navalny — and the Kremlin's reaction to his investigations — tells a lot about Moscow's approach to the conflict in Syria. 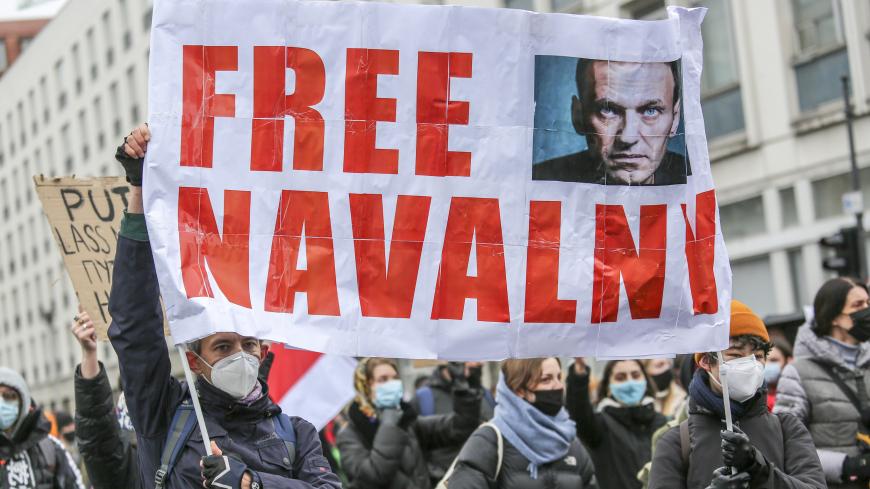 The events of the Arab Spring became a convenient reference point for journalists and experts whenever the topic of contemporary protests within the United or Russia was brought up. The parallels were stark as President Vladimir Putin’s third presidential term started against the backdrop of street demonstrations in Moscow’s Bolotnaya Square as protest activity ramped up in Syria and transitioned into a full-blown civil war. Putin’s own supporters equated the two events, framing them as national governments fighting “foreign aggression.” Yet that message had to be abandoned to avoid unfavorable connotations for the Kremlin stemming from the anti-dictatorial nature of the protests in the Middle East.

The recent mass protests in Russia sparked by the detention of opposition activist Alexey Navalny and his investigation revealing the details of an opulent palace allegedly belonging to Putin have led some observers in the Middle East to again draw certain parallels with events in the region. There are already comparisons between Navalny’s return to Moscow after his poisoning by the military-grade nerve agent Novichok and the possible return to Syria of opposition leaders. They, too, it is argued, could challenge President Bashar al-Assad even though they face imminent arrest once they set foot in the country.

The Navalny case — and the Kremlin’s reaction to his investigation, including his arrest — tells us something about the Russian political system. And drawing conclusions about Russia’s domestic rules of the game might help an outside observer understand the rules of Moscow’s policy abroad, most notably in Syria.

Navalny never touched upon the Kremlin’s dealings in Syria, largely limiting his investigations to the high costs of the military campaign, juxtaposing them with the low incomes of ordinary Russians in remote provincial towns. Yet the Navalny case also dispels any illusions about the Kremlin charting a more constructive course in its Middle East policy that would help achieve political compromises.

The first point relates to chemical weapons. The recently uncovered details about Russian operatives’ secret activities committed under the guise of the FSB’s Criminalistics Institute betray the Russian government's real attitude toward chemical weapons, which were officially liquidated in the country in 2017. Though some skeptics had expressed doubt about Russia's involvement in the attempted murder of Russian ex-spy Sergei Skripal in the United Kingdom, the Navalny case likely persuaded them to change their minds. Of course, there will always be those of the old Soviet school of thought who see Putin as the savior who lifted Russia from the mayhem of the 1990s. Proof of Russia’s culpability came in the form of Navalny’s 45-minute phone conversation with the Russian operative who divulged details about removing traces of poison from the victim’s garments.

All this is instructive for understanding Russia’s experience in Syria. In 2014, Syria was formally rid of its entire chemical weapons arsena in a process overseen by the United Nations and the Organization for the Prohibition of Chemical Weapons. In 2017 the Russian military reported the destruction the last two (out of an initial 27) sites where chemical weapons were produced and stored. Russia had consistently denied that the Syrian regime used chemical weapons in Khan Sheikhoun in northern Idlib province even as the Pentagon and the UN Security Council’s Commission claimed that Assad was still in control of some remaining chemical weapons. Some Russian experts acknowledged that items from the initial chemical arsenal — particularly the more advanced variants of weapons — might remain under the control of the Syrian regime. This insight is rendered more credible by claims about the existence of the sites for producing psychotropic substances such as BZ (agent 15) or military-grade nerve agents stronger than the XV substance.

Secondly, it is telling that Moscow is willing to deploy absurd justifications to avoid taking responsibility for the Navalny case. Judging by the details leaked from Putin’s conversation with the French President Emmanuel Macron, the Russian president claimed that Navalny was faking symptoms of poisoning. Later, Russian Foreign Minister Sergey Lavrov went as far as to suggest that Navalny might have been poisoned en route to Berlin. Later, after the publication of Navalny’s exposé about Putin’s palace, the Kremlin’s press secretary Dmitry Peskov and Putin himself in all seriousness denied the veracity of a clearly photoshopped picture of Putin swimming in the palace, even though it was obvious that the image was edited to serve as a teasing illustration for the video and not offered as evidence.

Russia’s absurd response to the Navalny story is further eroding the country’s credibility. Who is going to believe Moscow’s claims that the Syrian army did not use chemical weapons and that it was all the work of the Syrian opposition or radicals?

Third, investigations by Navalny, someone harboring presidential ambitions yet barred from taking part in elections before 2028 due to past criminal convictions, show that Putin is hardly opposed to the business clique within Russia that uses  shipments of medical equipment as a vehicle for chipping in to fund Putin’s palace. The Syrian president uses similar schemes to consolidate power, raising “informal taxes” to acquire funds from medium and large enterprises. Therefore, it is fair to assert  that Moscow is hardly a keen fighter of corruption in Syria. Nor is it surprising that Russian companies under Western sanctions use shadowy schemes to circumvent restrictions and avoid paying Russian taxes. None of this is surprising given Navalny’s insights about Russian officials using offshore entities to secretly buy exorbitant properties.

Fourth, Navalny’s investigation highlighted the existence of diverse interests among Russian elites. However, this diversity does not presuppose the existence of struggle between the proverbial Kremlin towers, in which the security clique or “siloviki” is fighting the Kremlin’s liberal wing. In reality, Navalny argues, there is no such inter-group conflict within the Russian system. Reports of the one are just a tactic to shift attention from Putin’s actions. This observation may relate to the Syrian context as well, as it is sometimes claimed that Assad should not be held responsible for some of the harsh or inappropriate actions of his generals. Syria is also an arena for various Russian interest groups. But again, there is no deep-seated conflict between those groups. On the contrary, they are wings of the same structure with Putin playing the role of arbiter between those interests.

Fifth, the Kremlin’s attitude toward the Russian opposition provides some understanding as to how Moscow may view the Syrian opposition. Experts are united in acknowledging that Russian elections are neither fair nor transparent. Candidates who dare to show independence are barred from participating. Smaller “spoiler” parties who enjoy tacit support from the Kremlin spilt the opposition vote and are rewarded with property, as Navalny uncovered.

In Syria, the Russian representatives use similar modus operandi. They support largely ineffectual opposition groups and figures to create an appearance of reform and preserve the power of the regime. Moreover, the attempts by Russian officials to frame protests in the country as a product of Western intelligence activity — and even to label the protesters as terrorists — bear some similarity to how Assad treated demonstrators in Syria.

The list can go on. There is also the degradation of the Russian judicial system and the arbitrariness of intelligence operations, although the scale of those problems luckily still lags behind that found in Syria. The Kremlin, a putative mediator in the Syrian conflict that claims to have the wishes of ordinary Syrians at heart is not known for paying attention to people’s preferences.

Moscow cannot offer a liberalizing vision of Syrian life as it grows into an even more consciously closed system nursing grievances against the West. Nor can it offer a vision for economic reconstruction of the country, considering its own corruption. So the Syrian stalemate is as much a sign of Moscow’s inability to find a compromise with other actors as it is an indicator of the lack of direction and purpose of the Russian system.