French president says no apology for colonization of Algeria

Algeria asked France to apologize for its actions during the more than 100 years of occupation. 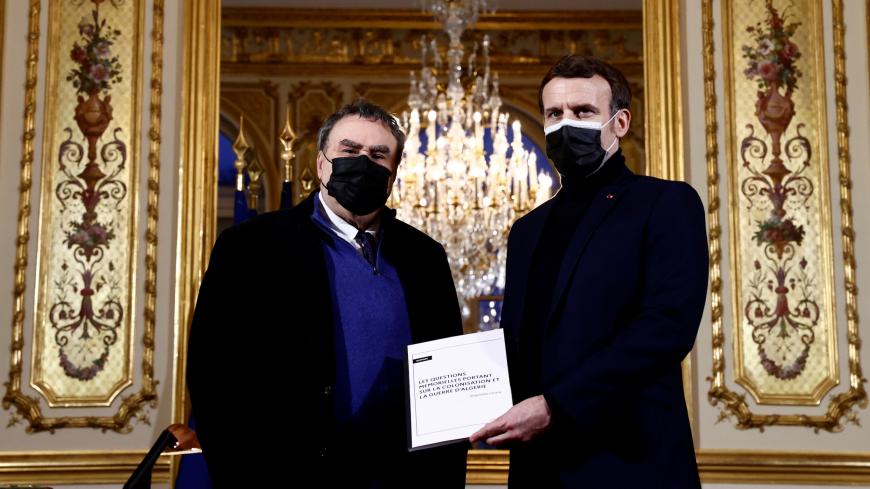 French President Emmanuel Macron (R) poses with French historian Benjamin Stora for the delivery of a report on the colonization and the Algerian War at the Elysee Palace in Paris on Jan. 20, 2021. - CHRISTIAN HARTMANN/AFP via Getty Images

French President Emmanuel Macron said he would not apologize for France’s colonization of Algeria on Wednesday. It is not the first time Macron, heavily active on the world stage, has made controversial comments related to North Africa.

Macron said there would be “no repentance nor apologies,” the French news service Agence France-Presse reported on Wednesday.

The comments pertain to the French occupation of Algeria from 1830 to 1962, as well as the independence war during the last eight years of that period. France had a massive colonial empire at the time that also included Tunisia, Lebanon and Syria in the 20th century. Algeria was a unique example because Paris ruled the North African country as a part of France. Hundreds of thousands of European settlers known as pieds-noirs moved there. The majority Arab and Berber Muslim population did not have the same rights as the newcomers.

Atrocities were committed by both French and Algerian forces during the war. After independence, there was a massive exodus of pieds-noirs as well as Algerian Jews and Muslims who had obtained French citizenship to France.

Macron’s comment coincided with the release of a report he commissioned on improving ties between France and Algeria. The report recommended a “memories and truth” commission to investigate French rule in Algeria and Macron agreed to establish it, according to The New York Times.

Algerian-French ties are wrapped up in their colonial history. In July, as Black Lives Matter protests broke out internationally, Algerian President Abdelmadjid Tebboune asked France to apologize for its treatment of Algerians during the occupation.

Macron's other controversial comments on Africa include his 2017 statement that Africa’s problems were “civilizational” and the result of African families producing “seven or eight children.”

Macron, who took office in 2017, has led international efforts to help Lebanon after the Beirut explosion last August. France also conducts military operations in the Sahel region of North Africa against Islamist forces.