The presidents of France and Algeria signed Aug. 27 a pact for a new partnership between the two countries, announcing the setting up of a joint historian commission to explore the colonial period, alleged French crimes and the bloody eight-year independence war. 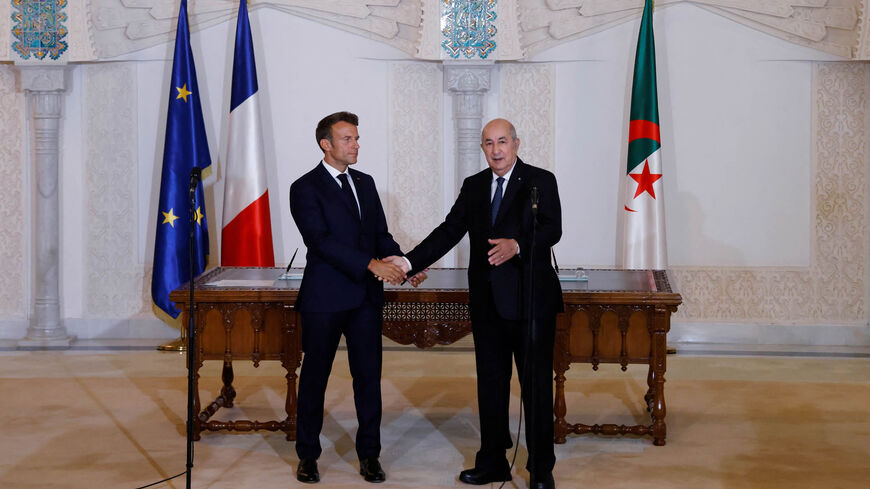 PARIS — The three-day visit of French President Emmanuel Macron to Algeria keeps revibrating in both countries, generating both acclaims and criticism. Some Algerians slammed Macron for not apologizing directly over the colonial period and French crimes during the Algerian independence war, while French far-right politicians accuse Macron of humiliating France.

On July 5, Algeria celebrated 60 years of independence after more than a century of French colonial rule. Since taking office, Macron has sought for his country to confront its colonial past in Africa in general, and Algeria in particular. Still, statements he made last year generated a diplomatic crisis with Algiers, when Macron questioned Algeria's existence as a nation before the French colonialism and accused the Algerian government of fomenting hatred toward France.

At the time, Algeria revocated its ambassador from Paris and banned French military aircraft on their way to bases in the Sahel to pass thought its airspace. Macron has since gone back on these remarks. Subsequently, the Algerian ambassador was reinstated and French military flights allowed into Algerian skies.

Already on the first day of his visit, Aug. 25, Macron announced that the two countries would set up a joint commission of historians to study archives on France's colonial rule in Algeria and the deadly Algerian independence war. He also announced that an additional 8,000 Algerian students would be admitted to study in French universities this year, joining 30,000 students already in the country.

Algerian President Abdelmadjid Tebboune hailed Aug. 25 the "promising prospects for improving the special partnership" between the two countries. He said that his meeting with his French counterpart was “an opportunity to discuss the security and political situation of common interest at the regional and international level,” adding that the visit marks “a recognition of Algeria’s pivotal role in the region” and a “return in force of Algerian diplomacy on the international scene.”

Concluding the visit Aug. 27, the two presidents declared a “new, irreversible dynamic of progress” in bilateral relations. Their joint declaration further stated, “France and Algeria have decided to open a new era … laying the foundation for a renewed partnership expressed through a concrete and constructive approach, focused on future projects and youth.” No further details were provided as to the nature of the new partnership, which reportedly touches on the politics of history, energy, civil society and security cooperation.

Analysts explain that Algeria seeks a bigger role in the region, especially on the backdrop of the Russian invasion to Ukraine and ensuing global energy crisis. With the European ban on Russian gas, Algeria is increasingly becoming an essential energy exporter. Algeria is currently Africa’s main natural gas exporter, with pipelines reaching Spain and Italy.

As such, France seeks to ensure the stability of the Algerian energy sector. Paris also seeks to increase its declining regional influence, on the backdrop of increased presence in Africa and North Africa of China, Russia, Turkey and other countries.

The Turkish Foreign Ministry reacted angrily to Macron’s statement, saying, "It is unacceptable that … Macron, who has difficulties in confronting his colonial past in Africa, especially Algeria, tries to get rid of his colonial past by accusing other countries, including our country."

The delegation of Macron to Algeria included among others senior French Muslim and Jewish figures. On his second day in Algeria, Macron laid a wreath at a monument to those who "died for France," in the mixed Christian-Jewish Saint Eugene cemetery, used during the colonial period. After that, he visited the Jewish part of that cemetery.

The inclusion of French Jewish personalities in the delegation sparked a controversy before Macron’s arrival. Islamist activists posted messages on social media against the expected arrival to Algeria of France’s Chief Rabbi Haim Korsia, himself of Algerian origin. Abderrazak Makri, leader of the Muslim Brotherhood-affiliated Social Movement for Peace, tweeted, “Official France is bringing back the chief rabbi of France who supports the entity [euphemism for the State of Israel] and who denies the rights of the Palestinians.”