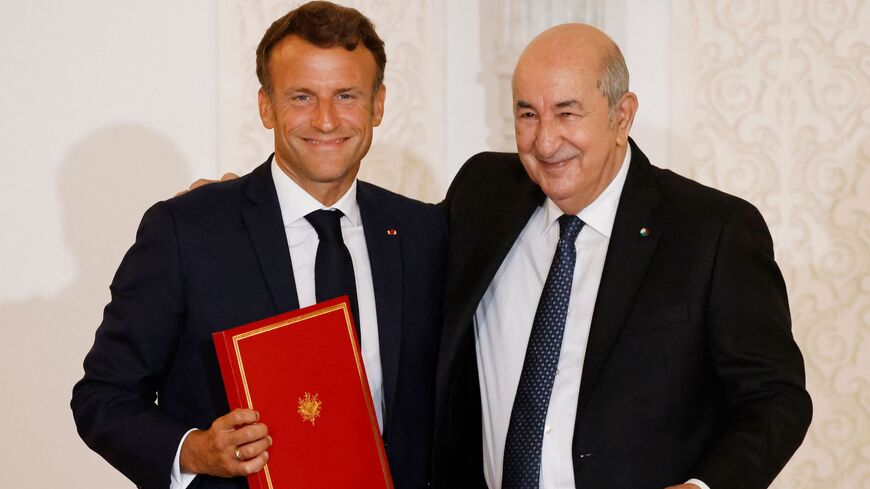 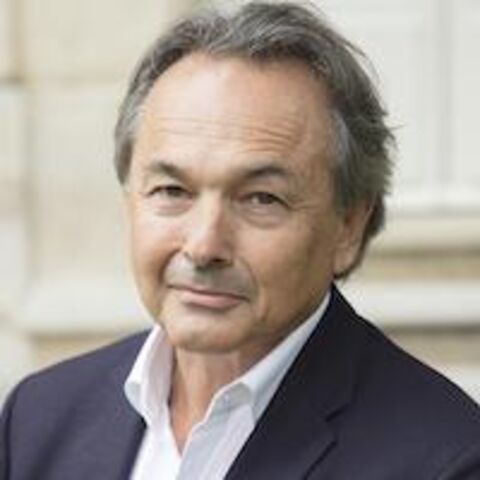 Key points: -French President Emmanuel Macron’s three-day visit to Algeria Aug. 25-27 involved an unprecedented meeting, bringing together — for the first time since Algeria’s independence — the two countries’ top military and intelligence officials, in the presence of both heads of state.

-This process helps turn the page on Macron’s October 2021 controversial remarks, when he argued that Algeria post-independence had been built on “a memory rent,” which Algiers had promoted beyond the Mediterranean and that set Algiers and Paris at loggerheads.

-This trip — which will be followed by a state visit to Morocco in the near future — is also part of the efforts to restructure international relations.

Macron arrived in Algeria on an “official and friendly” three-day visit on Aug. 25. His first stop was in Algiers, before traveling to the city of Oran and then heading back to Algiers where multiple agreements were signed to promote cooperation in the educational and cultural sectors between the two countries.

In addition to the formal dimension of the visit and the signed agreements, this trip brought together the two countries' top military and intelligence officials — for the first time since Algeria’s independence on July 5, 1962 — in the presence of the French and Algerian heads of state.

At the other end of the spectrum, the trip took the French president to the historic stronghold of Oran’s rai music, the “Disco Maghreb” record shop. He held a private dinner with author and journalist Kamel Daoud, along with other Oran civil society figures. The dinner was marked by an informal exchange of views with young entrepreneurs and athletes, and was followed by a breakdancing show in a sports complex.

In between, Macron’s visit to the Maqam Echahid — a huge monument commemorating those killed in Algeria’s war for independence — was followed by a wreath laying to the fallen French soldiers and civilians at a monument in Saint-Eugene cemetery, a walkabout in both the Christian and the Jewish cemeteries (where the famous French movie actor Roger Hanin is buried), a visit to the Great Mosque of Algiers and a pilgrimage to Santa Cruz Chapel. The latter is a spectacular basilica overlooking Oran and the port of Mers El Kebir — where 19 martyrs, including seven monks from the monastery of Tibhirine, killed in Algeria’s Civil War in the 1990s, were beatified four years ago.

This visit, which carries several meanings and to which the local authorities added strong luster by flying the Algerian and French flags along the route traveled by Macron — which is unprecedented since 1962 — was unique, perhaps because members of Algerian origin made up the lion’s share of the large French delegation: the presence of male and female MPs and senators, university deans, entrepreneurs, writers and artists, athletes, and community leaders reflects the successes and continuation of ancient Algeria’s pluralism, that of Muslims, Jews and pieds-noirs (people of French and other European descent who were born in Algeria during the period of French rule), on mainland French soil.

The 132-year-long period of French rule in Algeria is now part of history. Its memory is kept alive nowadays by its survivors and their descendants, who tell a controversial, yet collective, “Great Narrative.”

Each of the interlocutors established the legitimacy of their own cause, accusing the other of guilt and abuse. Six decades after the end of the war, the main symbolic purpose of this presidential visit is to morally press those concerned to overcome — without forgetting — these controversies in order to build a better future.

Drawing this future that is rooted in the present requires a major semantic change: the Algerian immigrants in France and their descendants of all origins, which were yesterday forgotten by history, are today the actors of a history that is in the making.

The “deconstruction” process — according to Jacques Derrida, the contemporary Spinoza of sorts of Algerian Judaism, to whom Paris and New York were a modern-day Amsterdam — can evolve to reshape in a fruitful and matrix-like manner the memories, whose foundation needs to be laid in particular by all descendants of Algerian immigrants.

Following upon the work of Benjamin Stora — who was a very important member of the French delegation — the Algerian and French sides agreed to set up a committee of historians from both countries tasked with working immediately on the corpus of this collective memory. This is while, in France, the sons and daughters of Algeria are, for many, closely mingled, through marriage and progeny, with the other components of the modern French society.

This brand-new process also helps in overcoming recent controversies stemming from Macron’s remarks in October 2021, criticizing the “memory rent” as used by the Algiers regime.

The contrast between the curses of the past and the mutual enthusiasm shown today should not be too surprising in light of the way politics work in the Arab world, where rhetorics play a disproportionate role: the expression of anathema is often a necessary precondition for reconciliation, as it makes it possible to move beyond what is left unsaid in a system of governance where democracy remains formal.

However, the Algerian side explicitly expressed motivation through multiple signs that are part of its own semantic register. They include the long hours of one-on-one discussions at the presidential residence in Zeralda at night, the interactions with the press following the signing of the agreements where President Abdelmadjid Tebboune spoke exclusively in French, and the Algerian Sukhoi Su-30 MKA1 fighter jets escorting Macron’s presidential Airbus to the edges of Algerian airspace.

Algeria today has everything to gain by rebuilding its relationship with France, which will allow the country to address a number of structural difficulties that are hampering both its domestic development and its Mediterranean and African positioning, and to diversify its international alliances, where the significant weight of the Soviet Union and then Russia, in addition to the disproportionate conditions imposed by its dependence on China at present, pose a problem.

Many journalists had mocked Macron’s trip before it happened, describing it as a rush for Algerian gas to stay warm in the winter, to compensate for the cutoff of gas supplies from Moscow in response to the European sanctions imposed over the Russian invasion of Ukraine.

While Algeria has benefited, similar to all hydrocarbons producers (89% of the value of exports) from the price hike (+ 69% in 2021 for the Sahara blend) after the peak of COVID-19 and the outbreak of war in Ukraine, it is hardly able to meet the quota production of 1 million barrels per day (800,000 in 2020 compared to 1.3 in 2010) required by OPEC, due to the depletion of its reserves, obsolete facilities, and growing domestic consumption (+ 4.5% annually) by a population of 44 million. Hence, Algeria’s contribution to winter-time heating in France can hardly be significant.

Food inflation (Algeria is the world’s largest importer of grains per capita) over the past year stood at 15% in the capital, and cereal grains account for 43% of the household food basket — which reflects the dinar’s continued depreciation against the euro and the dollar.

Politically, after former President Abdelaziz Bouteflika was forced out through the hirak — the massive popular movement that began in February 2019 and stopped a year later due to the outbreak of COVID-19 — the stabilization of power required a massive purge of the previous era's 50- and 60-year-old technocrats, who were accused of corruption and sentenced to hefty prison terms.

Army Chief of Staff Lt. Gen. Gaid Salah, reputedly close to Moscow and very hostile to Paris, and who had removed former President Bouteflika from office, passed away shortly after the election of Tebboune, with low turnout. In turn, Salah’s networks were dismantled.

High government positions became less attractive for talented youth, which has fueled a brain drain to Europe and to Gulf countries, where Algerians have carved out a niche for themselves at the expense of the Lebanese.

In this vein, the young age and dynamism of the French delegation’s members of Algerian origin created a contrasting effect – relayed through Macron’s call.

He urged for “confronting together the joint challenges, and deploying all efforts to bring answers and help the Algerian and French youth to succeed … when they decide to join the two shores of the Mediterranean, ... [they] are also binational or heirs of this history, whatever form it takes.”

He also announced that he had “taken decisions on the issue of mobility and movement.” The problem of visa restrictions is being resolved as a result of the sharp increase in the number of consular laissez-passer issued by Algiers for offenders who will be deported from France (as is the case for Morocco), which was at the origin of the problem.

Many of the Algerian delegation’s civilian and military members were in their 70s, or even in their 80s and 90s, which raises the issue of bringing new blood to the rule, which Bouteflika’s third and fourth terms were tragically an example of.

This trip — which should be followed by a state visit to Morocco in the near future — is also part of Paris's vision to restructure its international relations. The disintegration of historical alliances and partnerships was reflected in the divergent UN votes of most African countries immediately after the Russian invasion of Ukraine.

The doubts prevailing over global allegiances resulting from the fall of the Berlin Wall and the demise of the USSR, in addition to the disappointment of China’s partners as they are compelled to give up some of their sovereignty assets because they are unable to repay their debts to Beijing, and the questions surrounding Turkish ambitions in Africa, have fostered new state-to-state relations, particularly since migration flows created complementarities between communities on both shores of the Mediterranean.

The challenge here lies in making these [migration] flows positive by regulating them — as the European electorate is increasingly voting in favor of those pushing the Great Replacement theory (a conspiracy theory asserting there is a plan to replace the European white people with non-whites) — and contributing in the prosperity of migrant-sending nations, by encouraging the transfer of talent, which in turn will help promote the transnational integration of the diasporas.

In this case, overcoming mental blockages and ill feelings that stem from a normative interpretation of history, which uses the de-colonial ideology as an argument for activism, and creating a joint memory, is for Macron a guarantee for a better future.