As the Black Lives Matter movement demonstrations continue, Algerian President Abdelmadjid Tebboune has demanded an apology from France for its treatment of Algerians under 132 years of French occupation. 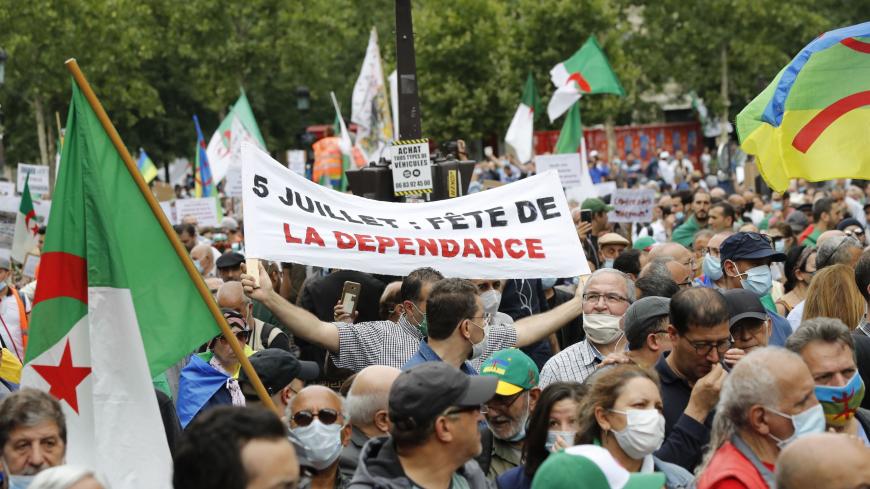 People attend a demonstration in Paris on July 5, 2020 in support of Algeria's Hirak protest movement as Algeria celebrates the anniversary of its 1962 independence from France. - FRANCOIS GUILLOT/AFP via Getty Images

France’s controversial legacy of colonialism has been thrown into the spotlight with Algerian President Abdelmadjid Tebboune saying his government is still awaiting an apology from Paris for the treatment of Algerians under 132 years of French occupation, culminating in a bloody eight-year war of independence that claimed some 1.5 million Algerian lives.

France is far from alone in being forced by current events to reckon with its past. The colonial histories of developed countries across much of the first world have come under scrutiny in the midst of the Black Lives Matter movement. However, for France and Algeria at least, the scars of the former’s occupation of the latter run painfully close to the surface.

According to Tebboune, an apology would help "face the problem of memory that jeopardizes many things in the relations between the two countries.” Moreover, looking to the future, it would "make it possible to cool tensions and create a calmer atmosphere for economic and cultural relations" between the two countries, particularly for the more than six million Algerians currently residing in France, he said.

However, after decades of near silence from Élysée on the subject of France’s actions during Algeria’s occupation, as well as the still painful memory of French barbarism during the war of independence, it is unclear at this late stage what an apology might do to help heal the divide that continues to separate the two states.

That Algerians have cause for grievance is an acknowledged fact. In September 2018, while stopping short of issuing a full apology, French President Emmanuel Macron publicly acknowledged that France had instigated a “system” of torture during Algeria’s war of independence, one that France must now face with “courage and lucidity.”

Some indication of the brutality of France’s occupation of Algeria was provided in early July, when France returned 24 skulls of Algeria’s early independence fighters, shot and decapitated by French troops during the early stages of colonial rule before being taken home as war trophies. Other examples of torture and mistreatment range from the systemic use of electrocution, beatings, waterboarding and sleep deprivation to the alleged execution of independence fighters, especially during the battle of Algiers, by setting their feet in cement and dropping them from helicopters over the Mediterranean. The victims became known, grimly, as "crevettes Bigeard," ("Bigeard’s shrimps," named after the French commander Marcel Bigeard).

For Algerians schooled in the inequities of the French occupation from childhood, such memories leave an indelible mark. “Algerians learn too much at school about the 132 years of crimes, genocides, nuclear tests, plunders. Also starvation and ignorance as policies committed by the French to torture Algerians,” freelance Algerian journalist Amine Hocine told Al-Monitor. “No one forgets those pictures and details in Algeria,” he said, “not only within the older generation that lived that era, but the young generation is also aware enough about the French crimes and the continuing negative influence of France in the region.”

Like many former colonial masters, France appears to be at once seeking to reconcile with the victims of its colonial past while also hoping to present its role during that period in as sympathetic a light as possible.

In 2011, following Macron’s visit to Algeria, Algerian Prime Minister Ahmed Ouyahia, who has since been imprisoned for corruption, announced that France would open up its national archive for the period from 1830 and 1962. This step has yet to happen.

On the election trail in 2017, centrist Macron rejected criticism from the French right and called upon France to apologize for its past crimes in Algeria. In an interview with Le Figaro, Macron characterized the colonization of Algeria as involving “crimes and acts of barbarism” that would now be seen as “crimes against humanity.” But Macron has yet to issue an apology since becoming head of state.

However, elements of the French right are by nature unwilling to sabotage what they see as France's glorious past, and a 2005 law requires schools to stress the “positive aspects” of French colonialism. Many of the children who grew up under that law are already in the workforce.

“Personally, I do not hold the new French generation responsible for the crimes of their ancestors,” Hocine said, “but the provocation is their continued pride of their colonial past, by the enactment in 2005 of a law that glorifies colonialism, and France's recognition of the Armenian Genocide before it recognized its own crimes in Algeria. The apology can result of an international pressure on France but not from a weak regime that has no popular legitimacy,” Hocine said, referring to the current Algerian government.

While the benefits of securing a stable relationship with Africa’s largest country as well as a hydrocarbon giant are obvious, France seems uncertain whether it is ready to undertake a true reckoning with its past.

“I think the chances of them getting the apology are pretty slim, to be honest,” Jonathan Hill, a specialist in Algerian politics from Kings College, London, told Al-Monitor. “Algeria is still a really sensitive issue with the French, much like Ireland might be for the British. Furthermore, Macron’s new right-wing government looks unlikely to be the one that’s going to issue that apology.”

The timing is nevertheless significant. “This request does fit with the current BLM zeitgeist about revisiting and reappraising history. Given that, it is a useful way of putting a bit of pressure on Paris and perhaps using it to leverage some concessions around investment or aid or visas,” Hill said.

Across the Western world, states are finding themselves revisiting their histories and examining the sources of their wealth and power. How far France is willing to go in that examination remains to be seen.