Israel fears that Iran would encourage the Houthis in Yemen to attack the southern city of Eilat. 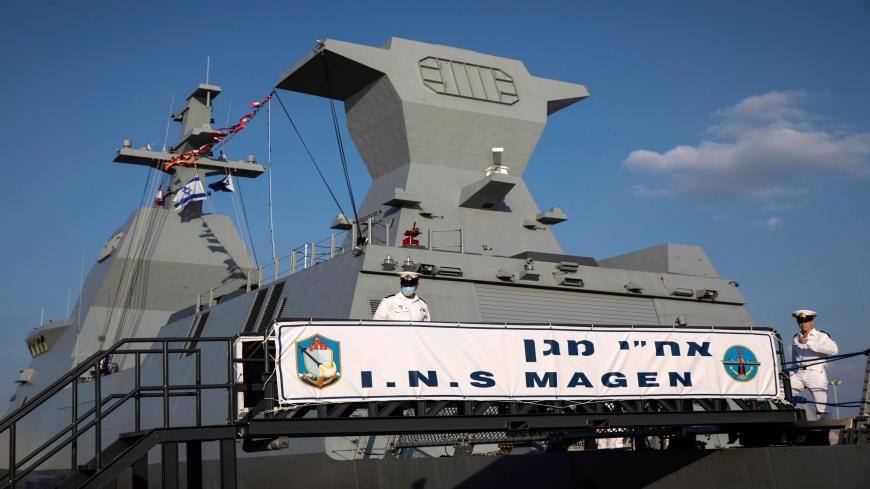 Israeli sailors stand on board the first of four new German-built Saar 6 naval vessels purchased by the navy, in the northern Haifa city naval base, Israel, Dec. 2, 2020. - Heidi Levine/POOL/AFP via Getty Images

Reports Jan. 6 revealed that the Israeli military had deployed about a week earlier Iron Dome and Patriot air defense batteries around the southern city of Eilat and in other locations in the region. The reason for the deployment was apparently concerns of an attack from the Iran-backed Houthi militia in Yemen. More specifically, Israel was afraid that Iran — via its proxies — would retaliate at Israeli targets on Jan. 3, the one-year anniversary of the killing by the United States of Gen. Qasem Soleimani.

The deployment of the two systems reveals the nature and extent of Israeli concerns. We are no longer talking about a geopolitical threat of Iran expanding its influence zone, but a much more concrete danger. The Iron Dome system is generally used against rockets, and has mostly been deployed against fire from the Gaza Strip. Still, experts explain that it can also intercept small drones and cruise missiles. As for the Patriot system, it can be used against ballistic missiles and larger aircraft like fighter jets and unmanned aerial vehicles.

Facing the Iranian/Iran-proxies threat, Israel did more than deploy defense batteries in the south. Already in late December, public radio station KAN reported that an Israeli navy submarine transited into the Red Sea, passing the Suez Canal on Dec. 19, with Egyptian approval. The same week, the Americans dispatched their Navy guided-missile submarine Georgia into the Persian Gulf. Much like the Israeli submarine, Georgia did not conceal its passage, in an apparent show of force against Iran.

Over the years, Israel has followed closely on movements of countries and armed groups in the Red Sea. One important reason was guaranteeing the security of Israeli merchant ships. The second reason was fear of Iranian attempts to smuggle arms by sea. Danger could emanate from both shores of the Red Sea, either the Arab Peninsula or Africa, and from different countries. But lately, it seems that Israeli security agencies are particularly concerned over Yemen.

On Nov. 23, the Houthi group in Yemen announced it had fired a missile on the Saudi state-owned oil company Aramco facility in Jeddah. A year earlier, the Houthis attacked by drones two other major Aramco facilities, causing fires and disrupting exports of petrol. These Houthi attack capabilities, improving from year to year, worry Israel. Especially now, with Israel proposing that the Emirates promote the construction of a land pipeline between Saudi Arabia and Israel, using the existing infrastructure of the Eilat Ashkelon Pipeline company (EAPC). Ironically, it is the same company that was originally set up in the late 1960s as a joint Israeli-Iranian venture, when the two countries still maintained diplomatic ties.

According to publications, Iran already started encouraging Hamas to target EAPC facilities. Israel fears that the Houthis could also pick up that mission, and that Tehran may transfer (or have already transferred) other long-range weapons to the Houthis.

An attack against Israel by the Houthis could well serve Iran. It would send a clear menacing message to Israel, without Iran taking openly the blame for it. Israel estimates that Iran could prefer this way of operating, especially with President-elect Joe Biden soon taking office. Tehran, it is believed, is expecting Washington to resume talks on the nuclear deal in the near future. And it is this situation exactly that worries Jerusalem — that Iran will resume nuclear talks with world powers while the Houthis are charged with targeting Israel.

Outgoing US Secretary of State Mike Pompeo said Jan. 10 that the United States plans to designate Yemen’s Houthi movement as a foreign terrorist organization. He intends for the decision to be approved by Jan. 19. Keeping a low profile on the issue, Jerusalem has not reacted to Pompeo’s announcement.