Pentagon tit-for-tat with Iran goes on

A Katyusha rocket strikes an Iraqi base where US troops are housed and the US Navy intercepts an apparent Iranian arms shipment for Yemeni rebels as the conflict between the United States and Iran and its proxies continues. 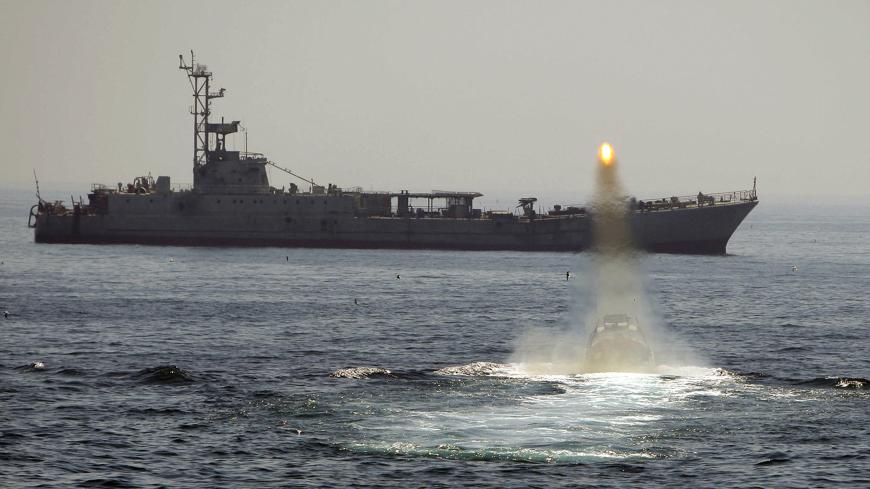 An Iranian warship and speed boats take part in a naval war game in the Persian Gulf and the Strait of Hormuz, southern Iran, April 22, 2010. - REUTERS/Fars News

The Pentagon announced that a rocket struck an Iraqi base housing American troops today and that US forces had intercepted a Yemen-bound dhow carrying Iranian-designed weapons days earlier, extending the ongoing military tit-for-tat with pro-Iranian forces.

A defense official told Al-Monitor that the K1 base in the oil-rich Iraqi city of Kirkuk was hit by a Katyusha rocket at 8:45 p.m. local time today, causing no injuries.

The Iraqi media also reported today that troops found the launch pad and 11 rockets near the base, but had not tracked down the perpetrators. A rocket attack from Iranian-backed forces killed a US contractor at the base Dec. 27, sparking a cycle of violence that culminated in Iran’s Jan. 8 ballistic missile attack on Al-Assad airbase.

Today's strike came after the US Navy seized a cache of Iranian-origin weapons bound for Yemen’s Houthi rebels Feb. 9, the Pentagon said today, and just hours before the Republican-led Senate voted to limit President Donald Trump's ability to undertake offensive strikes against Iran in a 55-45 bipartisan vote.

Experts said the Katyusha strike and the interception of Iranian equipment were signs that a more normal pace of conflict had resumed after the Jan. 8 and Dec. 27 missile strikes against the United States and the Jan. 3 US drone strike that killed Quds Force chief Qasem Soleimani, a top general in Iran's Islamic Revolutionary Guard Corps.

“An elevated new normal is a good way to describe it. We're back to business as usual, which was expected after the events of the past couple of months,” said Ariane Tatabani, a political scientist at the RAND Corporation who follows Iran. “Iran was never going to just conduct a few direct strikes and call it a day.”

Tatabani said Iran has been careful about attacks following the Jan. 8 ballistic missile strikes that left 109 US troops with mild traumatic brain injuries. “The point was to make sure they bookended it so they could resume proxy action with a certain degree of plausible deniability,” she said.

The bevy of weapons captured by the Navy included 150 anti-tank missiles and other arms "of Iranian design and manufacture" such as surface-to-air missiles, weapon scopes and drone parts. The US Central Command said many of the systems “are identical” to Iranian components seized by the United States in November.

The developments could set the tone for more congressional pushback on the Trump administration’s "maximum pressure" campaign to rein in Iran’s use of proxies in nations such as Iraq, Lebanon, Syria and Yemen. Secretary of State Mike Pompeo is finally set to testify in front of the House’s powerful foreign affairs panel Feb. 28, a House aide and a former US official told Al-Monitor.

While the top US diplomat failed to appear for two scheduled hearings in the wake of the drone strike that killed Soleimani, House Foreign Affairs Committee Chairman Eliot Engel, D-N.Y., said late last month that Pompeo had agreed to testify on the Quds Force leader’s death. No date was named at the time.

Ahead of his testimony, Pompeo told travelling reporters today he plans to continue to scrutinize Iran-backed attacks in the region. The top US diplomat will visit Saudi Aramco’s Abqaiq refining facility that the Trump administration suspects that Iran targeted with a massive drone and missile strike Sept. 14.

The attack led the Pentagon to deploy two F-15 fighter squadrons, an air expeditionary wing, three Patriot missile defense batteries and a THAAD air defense battery to Saudi Arabia. The United States has added 20,000 troops to the Middle East since tensions surged with Iran after the Trump administration ended sanctions waivers for importers of Tehran’s oil in May.

“The US does have a threshold for sure, but it is one that both allies and adversaries understand is high,” said Behnam Ben Taleblu, a senior fellow at the Foundation for Defense of Democracies, which advocates for tough US policy on Iran. “Under such a scenario, allies will always be wondering, ‘Will Washington have our back if Iran comes after us?’ This is precisely the sort of doubt the [Islamic Revolutionary Guard Corps] sought to sow with the [June 20] downing of the US drone as well as the attack on Abqaiq in 2019.”