The US military targeted five weapons facilities of an Iran-backed group after an earlier rocket attack left two American and one British service member dead. 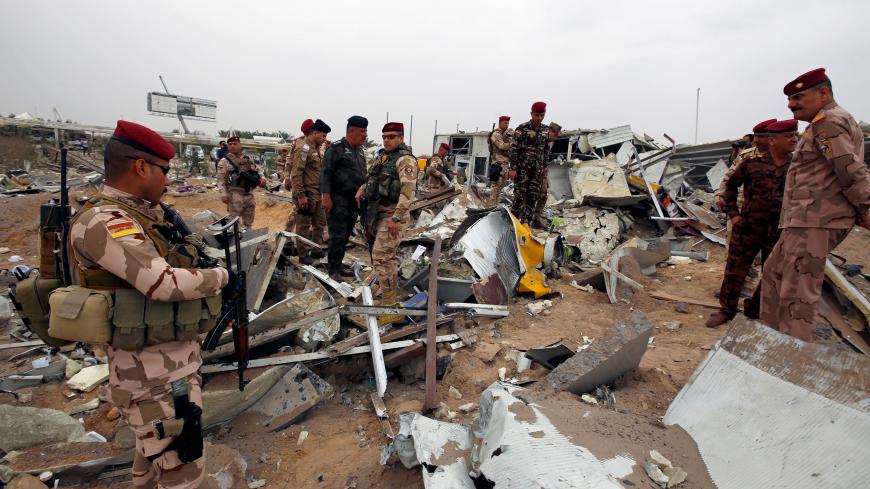 Iraqi security forces check the damage to an under-construction civilian airport, which, according to Iraqi authorities, was hit by a US airstrike in the holy Shiite city of Karbala, Iraq, March 13, 2020. - REUTERS/Alaa al-Marjani

The Donald Trump administration plans to keep two aircraft carriers in the Middle East and is preparing to send missile defense batteries to Iraq after the Pentagon launched retaliatory airstrikes against Iran-backed groups.

US Central Command chief Gen. Kenneth McKenzie, the top American military commander in the region, told reporters today that the early morning strikes were defensive and proportional and responded to Iran-backed Shiite groups that had attacked coalition troops.

“We never have to wait to be struck,” McKenzie said. “If we believe an attack is imminent … I and my commanders have full authority [to strike].”

The Patriot batteries that are being prepared to go to Iraq will be supplemented by counter-rocket weapons that are better suited to shoot down the 107mm rockets that were fired on Camp Taji. Fourteen troops and contractors were injured, with five in critical condition, in the suspected Iran-backed attack March 11.

But the airstrikes, which Iraq described as an “assault,” highlighted the challenges in the Trump administration’s relationship with Iraq, where the government in Baghdad has also seen increasing turmoil that could impact the US presence.

Iraq’s then-caretaker Prime Minister Adel Abdul Mahdi spearheaded a nonbinding vote in parliament aimed at encouraging the expulsion of 5,200 US troops from the country, which has been wracked by anti-corruption protests since October.

Abdul Mahdi’s constitutional limit to hold Iraq’s top office expired March 2, just one day after parliament rejected his successor-in-waiting’s chosen Cabinet, prompting Mohammed Tawfiq Allawi’s resignation from the post. Al-Monitor reported in January that Abdul Mahdi had privately hoped that US troops would stay in the country, despite the expulsion vote.

The Iraqi military said in a statement that the retaliatory strikes targeted the areas of Jurf al-Nasr, al-Musayyib, Najaf and Alexandria, and struck the headquarters of the Iran-backed Popular Mobilization Units, killing five. McKenzie said the Iraqis were consulted after the strikes. “I don’t know whether the Iraqis are happy or unhappy,” he said.

Friday’s five precision strikes were a one-off “unless the groups escalate,” a US official told Al-Monitor. A former senior administration official told this publication earlier today that the Islamic Revolutionary Guard Corps — known by the acronym IRGC — likely had knowledge of Wednesday’s attack.

Open source reports on Wednesday indicated that sites belonging to the IRGC, the elite arm of the Iranian military, had been struck by airstrikes in the city of Abu Kamal, near Syria’s border with Iraq. But the US official told Al-Monitor on Thursday that those strikes were not conducted by US forces.

Friday’s strikes targeted weapons caches belonging to the Iran-backed Kataib Hezbollah, similar to an operation that the Pentagon carried out after a December attack on American forces in Kirkuk, Iraq, left American contractor Nawres Hamid dead.

That attack sparked a cycle of escalation that culminated in an American drone strike that killed Quds Force chief Qasem Soleimani as he left Baghdad International Airport Jan. 3, prompting an Iranian ballistic missile attack on al-Asad air base five days later that left more than 100 US troops with mild traumatic brain injuries.

But the Trump administration faces increased scrutiny of its Iran policy from Congress. Late Wednesday, the House OK’d a bill that would limit President Trump’s legal powers to carry out offensive military strikes against Iran, a move that is likely to prompt a veto from the commander in chief.

Wednesday’s attack was the second deadly day for American forces in Iraq this week. On March 8, two Marine Raiders died in a firefight with Islamic State fighters in a cave complex in the mountainous northern city of Makhmour, Iraq.