Multiple US troops dead in Iraq after rocket strike

A rocket attack on a US base in Iraq killed two US service members and prompted questions of whether it was a retaliatory act by Iran. 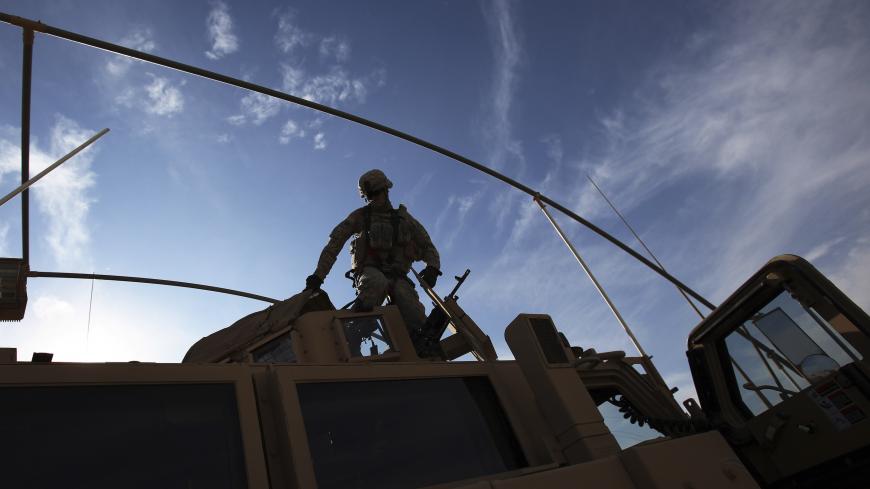 A US Army soldier from the 2nd Brigade 82nd Airborne Division gets out of his Mine Resistant Ambush Protected (MRAP) vehicle after arriving at Camp Kalsu near Hillla, December 5, 2011. - REUTERS/Shannon Stapleton

Two Americans and one British servicemember were killed in a rocket attack on Iraq’s Camp Taji base, just north of Baghdad, a security source confirmed to Al-Monitor. One American contractor was among the dead in the attack that took place at around 8 p.m. local time March 11, the source said.

US forces in Iraq quickly located a truck that had the capability to fire 36 Katyushas near the base. Pictures of vehicles carrying the Soviet-era rocket artillery system surfaced on Twitter in the hours after the attack.

Camp Taji was not targeted during the Jan. 8 Iranian ballistic missile attack that left more than 100 US service members with mild traumatic brain injuries. The news came amid reports of several strikes against Iran-backed Popular Mobilization Units and Islamic Revolutionary Guard Corps units along Iraq’s border with Syria.

Wednesday’s attack could spark a response from the Donald Trump administration, as the commander in chief has previously pledged that the death of American servicemembers or personnel could trigger a US military reaction.

President Trump, flanked by top military officials, insisted in a White House speech in January after the ballistic missile attacks that Iran appeared “to be standing down” after a 12-day spell that saw an American contractor killed and US retaliation that began with strikes on military caches of Iran-backed groups.

But experts insist that Iran was never likely to stand down for long after a Pentagon drone strike took out Iranian Quds Force chief Qasem Soleimani, whom US officials credited with extending Iran’s paramilitary reach into Iraq, Syria and Yemen. Soleimani would have turned 63 today.

“Iran was never going to sit back after the Soleimani episode, and folks who said it was over were jumping the gun,” said Ariane Tabatabai, an associate political scientist at the RAND Corporation. “So, if this is them, then it was to be expected.”

The scope and lethality of Wednesday’s attacks could indicate that Iran has further extended its willingness to escalate the ongoing tit-for-tat with the United States. “Seems in line with their modus operandi, but they appear more willing to inflict casualties, which was seen as a red line for a while,” Tabatabai added.

It was not immediately clear if the US or coalition military officials had detained anyone from the vehicle. The security source who spoke to Al-Monitor said there was no way the attack could have been carried out by the Islamic State (IS).

The episode marks the second fatal episode for US troops in Iraq this week. On March 8, the Pentagon confirmed that Gunnery Sgt. Diego D. Pongo, 34, of Simi Valley, California, and Capt. Moises A. Navas, 34, of Germantown, Maryland, assigned to a Marine special forces battalion were killed in a raid against IS forces in Makhmur, a city in northern Iraq.