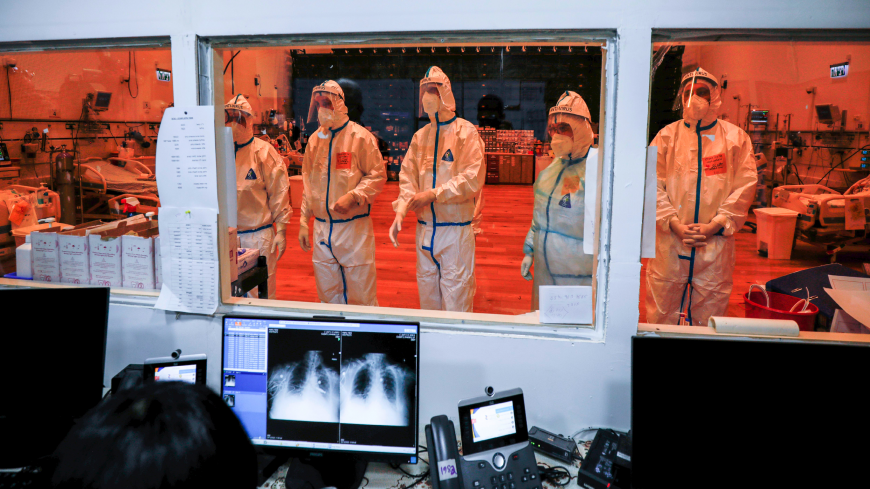 This picture taken on December 24, 2020, from a control room shows medical workers standing inside a COVID-19 coronavirus isolation ward at the Ziv Medical Centre in the city of Safed in northern Israel. - JALAA MAREY/AFP via Getty Images

Israel has stopped flights into the country following a surge in coronavirus cases. The flight ban also comes amid violent clashes over virus restrictions in the country.

As of Monday, all passenger flights are prohibited from entering Israel. The only flights allowed in are flights for cargo, medical evacuation and putting out fires. Flying out of Israel is only allowed for medical treatment, the funeral of a close relative or a necessary judicial proceeding, according to a press release from the prime minister's office. The government may also allow exceptions based on humanitarian concerns and need.

Israel has struggled to contain COVID-19 since the start of the pandemic. Anti-government protests, opposition to anti-virus measures in religious Jewish communities and the economic situation have all complicated the government’s efforts to enforce health measures.

The current surge began in December, and Israel is now registering several thousand cases a day, according to Worldometer.

At the same time, Israel is leading the world in vaccinations against the coronavirus. Israel has administered around two doses per 100 people, according to Our World in Data. Many vaccines require two doses.

Tensions are running high in Israel over the government’s virus response. On Sunday night, a mob of religious Orthodox Jews attacked two buses in Jerusalem. Israeli police fired stun grenades in response. Some in the community feel the government is singling them out with its virus mitigation measures.