Russia suspended air traffic with Turkey in April due to a spike in coronavirus cases, but infections have since gone down significantly in Turkey and vaccinations are up. 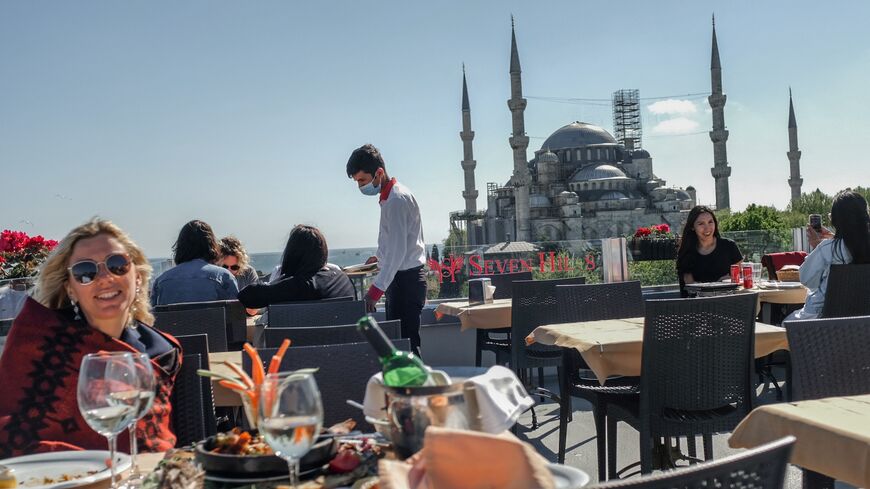 Tourists eat near the Hagia Sophia Mosque at Sultanahmet in Istanbul on May 9, 2021. - BULENT KILIC/AFP via Getty Images

Thousands of Russian tourists arrived in Turkey on Tuesday following the resumption of flights between the two countries.

A Turkish Airlines flight from Moscow was the first to land in Antalya. Turkish authorities estimated that 12,000 tourists would arrive to the Mediterranean coastal city throughout the day.

Russia suspended air service with Turkey on April 15 due to concerns about new strains of COVID-19 in the country. The move dealt a major blow to Turkey’s tourism industry and Turkish officials were unable to convince their Russian counterparts to lift the ban.

Many speculated that the real reason Moscow suspended the flights was Ankara’s vocal support for Ukraine amid a Russian buildup on the former Soviet country’s eastern border. Turkey has also struck an agreement to sell its Bayraktar drones to Ukraine, delivering six of them so far and prompting stiff rebukes from Moscow. But the resumption of the flights belies that theory, as nothing has changed in terms of Turkey’s Ukraine policy and Turkish President Recep Tayyip Erdogan is widely expected to take part in a summit on Crimea due to held in Ukraine this fall. Turkey’s official position remains that the peninsula, which was annexed by Russia in 2014, must be returned to Ukraine.

Tourists from Russia account for a major portion of Turkey’s international visitors. Six million Russians visited Turkey in 2019 before the coronavirus pandemic, 12% of all foreign visitors that year. In 2020, the number of Russian tourists was 2.1 million, according to Anadolu.

Ten Russian airlines resumed flights to Turkey on Tuesday and 12 in total have permits to fly there. They are currently flying to the capital Ankara, Turkey’s largest city Istanbul and the popular tourist destinations Antalya, Dalaman and Bodrum. Russia’s flagship airline Aerosoft may increase the frequency of flights to Turkey in the near future, according to the Russian government’s TASS news agency.

Turkey has been under a virus-related lockdown for much of the year, though restrictions have eased in recent weeks due to falling COVID-19 cases. The government plans to lift the Sunday lockdowns and weeknight curfews on July 1. Tourists are exempted from the country’s anti-virus restrictions.

Turkey, which has a population of more than 80 million, is currently recording about 5,000 new COVID-19 infections a day. The number is way down from the more than 50,000 cases a day in April, according to Worldometer.

It is possible that Turkey has turned a corner in its fight against the virus, which would bode well for tourism the rest of the year. More than 30% of the Turkish population has received at least one dose of a COVID-19 vaccine. The number of doses administered increased dramatically in June, according to Our World in Data.