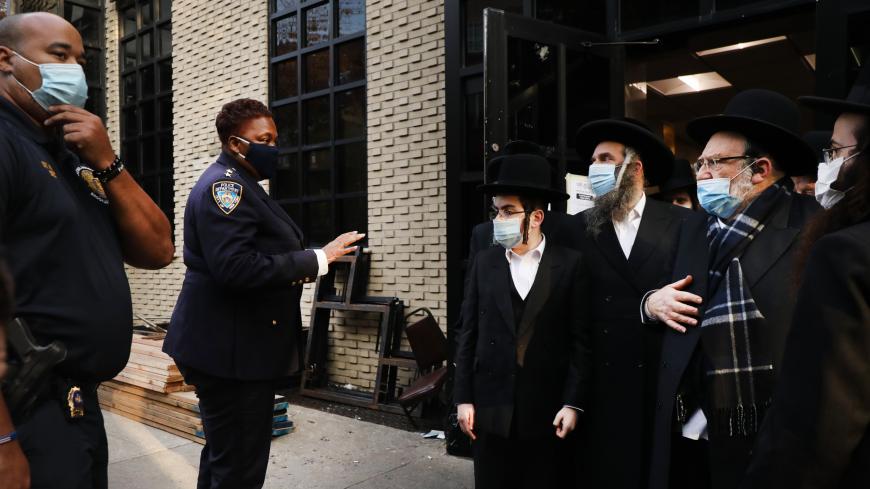 Members of the New York Police Department stand outside as people congregate outside of the Congregation Yetev Lev D'Satmar synagogue on Oct. 19, 2020, in the Williamsburg neighborhood in the Brooklyn borrough of New York City. A wedding planned for a grandchild of Zalman Leib Teitelbaum, a grand rabbi of the Satmar sect, was ordered to be shut down after COVID-19 outbreak in the community.The state limit on wedding receptions in New York City is 50 people. - Spencer Platt/Getty Images

NEW YORK — Orthodox Jews and New York authorities are in a state of conflict over coronavirus-related measures. The situation closely resembles that in Israel and has captured the attention of the Israeli press.

Much of the anger in New York stems from authorities cracking down on large gatherings, specifically in Orthodox Jewish neighborhoods, while having allowed massive anti-police protests throughout the year. Israel is also experiencing anti-government protests, and some Israelis blame religious Jews for the virus’ renewed spread. One controversial New York rabbi known for his remarks on the virus and who is originally from the Jewish state said that there is a double standard being applied by the governments in both countries.

“The authorities did not seem to have any problem with riots and gatherings and demonstrations in New York or Israel,” Yosef Mizrachi, who now lives in the suburb of Monsey, New York, told Al-Monitor. “But with Orthodox Jews, they are very, very strict.”

Earlier this month, New York Gov. Andrew Cuomo announced a new initiative to put in place restrictions on large gatherings in geographic “clusters” where there is a high density of COVID-19 cases. The “red zones,” where the virus is most widespread, must adhere to having 10 people only in houses of worship, takeout dining only and various other restrictions. The map of red zones overlaps with many largely Orthodox Jewish communities in and around New York City. The zones are determined by the rate of positive tests recorded in the area, according to state of New York metrics.

Cuomo said the neighborhood-specific rules are necessary because of a lack of compliance in the Orthodox Jewish community.

“The Orthodox Jewish community. … What’s happening there is the rules were never enforced in these communities,” said Cuomo during an Oct. 8 conference call with reporters.

New York City Mayor Bill de Blasio also supports the measures. The state has since acknowledged progress and adjusted restrictions in some of the areas.

Violators of the red zone restrictions can face fines of up to $15,000. Some Orthodox Jews say the enforcement is unfair. On Oct. 20, a video went viral that appeared to show an inspector fining a kosher restaurant with no customers in it for having its door open.

The Democratic governor and possible candidate for the 2024 presidential election has used his support for Israel to defend his actions to Jewish New Yorkers.

“You haven’t had a governor who is a greater friend of Israel and the Jewish community,” said Cuomo during the Oct. 8 conference call. “Nobody has traveled more to Israel.”

Cuomo pointed to his executive order divesting state funds from the controversial boycott, divestment  and sanctions (BDS) movement, which supports a variety of boycotts against Israel for its treatment of Palestinians.

“Nobody’s fought anti-Semitism more aggressively than I have, first governor to do BDS,” he said on the call.

The conflict is not new. In April, de Blasio singled out the “Jewish community” in a tweet after Haredi Jews held a large funeral in Brooklyn for a rabbi at the height of the pandemic. De Blasio also went to the area himself to ensure the crowd was dispersed. He later said he should have resorted to more dialogue.

Brooklynite political analyst Yossi Schlussel said that the funeral was a mistake, but that the mayor did not apply such rigorous enforcement to all New Yorkers.

“There was a rather large funeral, which understandably shouldn't have happened,” Schlussel told Al-Monitor. “But the response from the mayor tweeting about it and personally coming down to disperse the crowd was devastating while people all across the city were allowed to spend time non-distanced in parks.”

Protests broke out in Orthodox Jewish neighborhoods in the New York City borough of Brooklyn this month against the state’s new virus rules. Radio talk show host Heshy Tischler has emerged as a leader of the demonstrators. His actions have come under scrutiny. On Oct. 7, a group of Orthodox Jews attacked Hasidic journalist Jacob Kornbluh, who reports on the virus situation in the community for Jewish Insider. Tischler was arrested Oct. 11 for his alleged role in the incident, but denies any wrongdoing.

Tischler, who is running for a city council seat, remains adamant that the anti-virus measures have gone too far and praised news of Jews cutting locks to enter closed parks over the summer.

“This entire community locked itself up: March, April, May, June,” Tischler told Al-Monitor from his Brooklyn office. “It never ended. So I went out there and cut the locks. I opened the parks and said, ‘Look, people, you’re free.’”

Israel finds itself in a similar situation to New York. Protests have occurred throughout the pandemic against Prime Minister Benjamin Netanyahu, who recently instituted restrictions on protesting amid a large COVID-19 outbreak. Haredi Jews and Israeli police frequently clash over the enforcement of social distancing measures. Much of the Israeli public blames the Haredi community for the virus’ resurgence, and this sentiment is threatening Netanyahu’s alliance with Haredi Jewish parties.

It is therefore no surprise that Israeli media are covering the issue in New York extensively. The Times of Israel conducted a lengthy interview with Tischler on Oct. 15. Two days earlier, the center-left news outlet Haaretz held a discussion on how the virus has affected Orthodox communities in both New York and Israel.

Some Israeli media outlets have amplified harsh criticism of Cuomo by Jewish leaders. Arutz Sheva published an interview with Brooklyn Rabbi Hillel Handler on Oct. 7 in which he called the governor a “mass murderer” due to the COVID-19 deaths in New York nursing homes earlier this year.

Israel connects to the issue in several ways. Many Orthodox Jews follow events in Israel and some, like Tischler, have family there. Haredi Jews are divided on their views toward Zionism, with some rejecting the legitimacy of the State of Israel. Other Orthodox Jews support the Jewish state.

US President Donald Trump’s support for Israel is one reason he is popular in the Orthodox community. Secular Jews, on the other hand, are more often Democrats and open to criticism of Israel. Tischler is supportive of Trump’s foreign policy, including his role in the normalization agreements the United Arab Emirates and Bahrain signed with Israel.

“He’s one of the first presidents I’ve ever seen that’s not had a war,” said Tischler. “He promised to make peace between Israel and its neighbors. Everybody laughed. He actually did it and he did it with some serious countries.”

Tischler promoted the Jews for Trump parade that took place Sunday on Twitter.

Views on the situation in Israel vary in New York. Meyer Labin is from the suburb of Chestnut Ridge, New York, which has a significant Haredi Jewish population. He also spends time in Israel and blamed the conflict with Haredi Jews in particular in part on poor dialogue.

“There’s been a lack of communication on both sides,” Labin told Al-Monitor. “It’s also the Haredi communities communicating their problems and their concerns.”

Labin said that protests occurring in both Israel and the United States in defiance of social distancing guidelines created a rift between authorities and Haredi Jews, who view communal prayer and learning as absolutely necessary.

“From a secular perspective, if you understand that for the continuity of democracy as an institution you have to not put any limits on protest, I can understand why a Haredi person would say, ‘So is communal prayer for us,’” he said.

The isolated lifestyles of Haredi Jews in particular mean they see the virus situation differently than some others. This way of life contrasts with the secular nationalism that many Israelis subscribe to, according to Labin.

“This is a community that actually made a conscious decision after the Holocaust to isolate themselves,” he said. “They didn’t take the Zionist approach of militarism.”

“They see themselves as Jews from Sinai first,” added Labin, referring to the mountain where Jews believe Moses received the Ten Commandments. “Their commitment lies first and foremost with their traditions and their way of life.”

Labin said that the Haredi community in both countries would benefit from greater leadership. This could include consultations from rabbis on what to do when government restrictions interfere with Jewish religious observance.

“There’s a void of leadership in the Haredi world in Israel and America,” said Labin. “Some of them haven’t respected the rules as much only when it interfered with things Haredi people saw as essential to Jewish life.”

“There hasn’t been enough rabbinical leadership to give them direction.”