Israel provides Gaza with machines to extract water from air

An Israeli firm donated generators producing drinking water from air to the Gaza Strip, which faces an acute water shortage crisis, amid controversy about cooperation between the two sides. 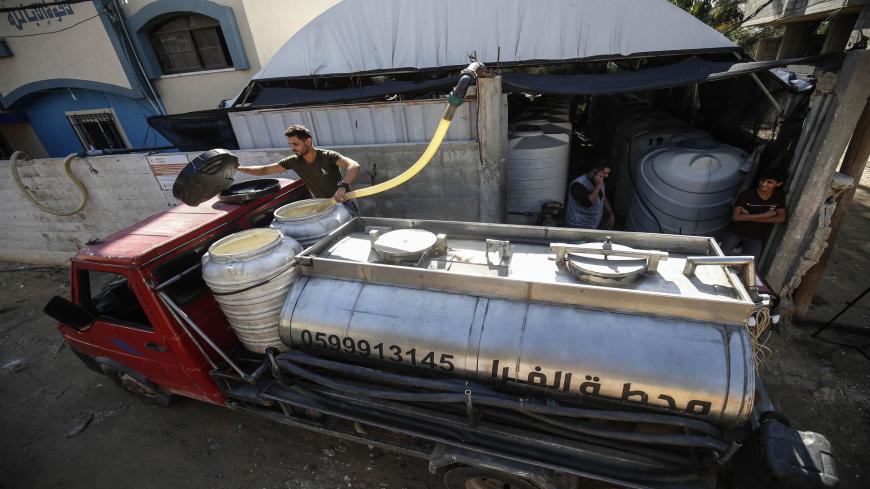 A Palestinian worker fills up a truck transporting water from a freshwater plant that extracts water from wells and sells to people in the town of Khan Yunis, southern Gaza Strip, Nov. 18, 2020. - Said Khatib/AFP via Getty Images

In early January, Damour for Community Development, a nongovernmental organization based in Ramallah in the West Bank, brought into the besieged enclave two atmospheric water generators that turn air into water using solar power. The machines are produced by Watergen, an Israeli branch of a US company that obtained the patent for this device in 2015. Watergen paid for half the cost of the two devices, while three families residing in Europe donated the other half. The two machines cost about $61,000 each.

The representative of Damour for Community Development in Gaza, Fathi Sheikh Khalil, told Al-Monitor that the device generating water from air uses a heat exchanger to cool the air and condense water vapor into fresh drinking water. The generator relies on several sand and mineral filters to purify the air and capture humidity. Then the heat exchange process begins, with water absorbed and distilled, and the necessary minerals injected into it, he added.

Sheikh Khalil said that this cutting-edge technology provides a cheap solution for finding a renewable source of pure water in Gaza. “The production capacity varies according to the generator’s size and filters and depending on the temperature and humidity. The generator in Abasan al-Kabira produces 800 liters [211 gallons] of water per day at a cost not exceeding $10,000 provided the humidity level is 75%. The generator in Khan Yunis produces 6,000 liters [1,585 gallons] per day at a cost of $70,000 when humidity is close to 90%,” he noted.

He added that the two generators need only a very small surface as opposed to desalination plants that require large areas for their construction, not to mention their need for a water source and electricity supplies. “Desalination plants have a high production capacity ranging between 20,000 [5,283 gallons] and 100,000 liters [26,417 gallons]. The generated water can be used for agriculture and domestic consumption and not only as drinking water, while Watergen generators are only used for drinking water.”

Sheikh Khalil noted that the generators are now three months into a six-month trial phase aimed to assess their operation and quality. “We are currently conducting a preliminary study on their economic viability, as solar energy was used instead of electricity to run the generators. We were able to install panels generating 100 kilowatt of solar energy for the generator in the municipality of Khan Yunis to reduce the cost of electricity, which is exorbitant in Gaza. The generators certainly will not solve the water crisis in Gaza, but they will raise the awareness of Gaza residents about the existence of this technology, which can be the solution to secure clean water.”

He said that Damour for Community Development managed to work in Gaza without dealing with the Hamas-controlled government institutions, given its relationship and work with the Israeli Wadi Araba Institute concerned with the environment and alternative energy. “The role of [the Hamas-run] institutions is limited to receiving generators from the Palestinian side, and they do not coordinate with the Israeli side,” he added.

Anis Abu Hamad, a member of the Development and Investment Department at Abasan al-Kabira municipality, praised the generator’s high production capacity compared to its price. “Gaza has never been provided with water as clean as that produced by these generators. It is not possible to compare this water to that of the desalination plants widespread in Gaza. These plants are depleting the groundwater,” he told Al-Monitor.

He said that Gazans buy drinking water from water tank trucks. This water is extracted from groundwater and subject to treatment processes, but is not examined and tested for compliance with health standards, he explained. “The water produced from air is used by the general public — especially kidney patients — due to its low salinity. It may well be a solution to the water crisis in Gaza. The generators that were brought in were large in size. If more solar panels are added, the operating cost would be zero and the generators would be highly economically feasible.”

Economic analyst Mouin Rajab told Al-Monitor that the Gaza Strip suffers a scarcity of potable water. The United Nations had warned in a 2012 report that Gaza would be “unfit for life” by 2020 if nothing was done to ease the ongoing blockade imposed in 2006.

In 2017, the United Nations issued another report calling for action when it comes to water in the Gaza Strip. The report stated that more than 95% of the water in Gaza is not suitable for drinking. Rajab said that similar reports contributed to delaying the water scarcity crisis. “The European Union and several international institutions intervened to construct water desalination projects and plants in the Gaza Strip. Also, the rainy season recently improved leading to an improvement of groundwater.”

He said that Gaza suffers a severe water crisis due to its reliance on desalination plants, adding, “Groundwater is being desalinated and the extracted salts and impurities are repumped into the sewage or the sea, which further complicates the water problem in Gaza. The enclave needs unique, environmentally friendly projects that provide clean potable water that meets environmental standards.”

Rajab praised the benefits of large desalination plants but pointed to their many environmental problems and their exorbitant construction cost. “Desalination plants require huge spaces and equipment to generate enough water. The generator producing water from air does not waste water and has no negative impacts on the environment,” he said.

Despite the scarcity of water, poor electricity supply and soaring unemployment, the population in Gaza is steadily rising. The population in the besieged enclave, estimated now around 2 million, is expected to reach 3.3 million by 2030. This requires innovative and qualitative initiatives to preserve life in Gaza.

“We do not have economic or political independence, so why should we not receive donations from Israeli parties?” Rajab said, commenting on the donation of the water generators by an Israeli company.

He concluded, “Until the Palestinian government can rely on itself and find an alternative, we will not [refuse] donations from Israel. The citizens’ interest and health are above any political outbidding.”