The Palestinian Environmental Quality Authority held an exhibition in the Gaza Strip showcasing innovative ideas to cope with the environmental problems in the besieged enclave. 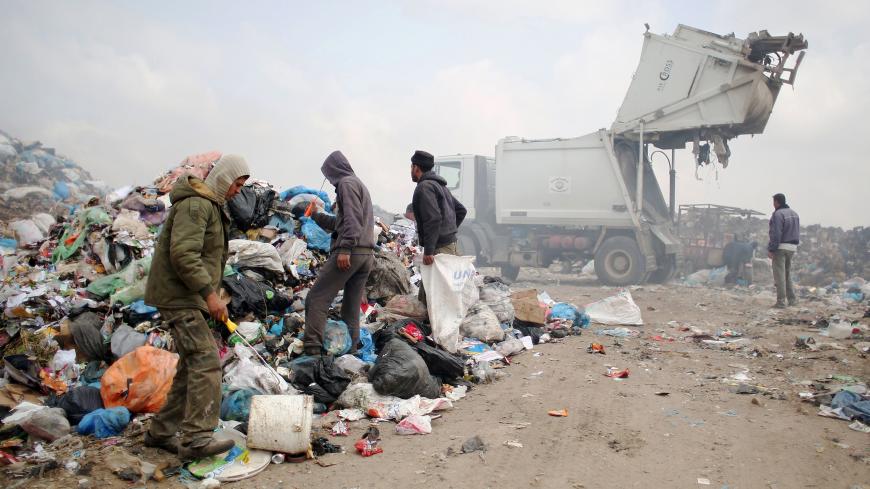 Palestinians search for recyclable waste and other items amid a pile of rubbish at a garbage dump in Rafah, Gaza Strip, April 16, 2015. - SAID KHATIB/AFP/Getty Images

The exhibition, which highlights ideas for alternative energy and recycling projects in agriculture, housing, transportation and water, is one out of three expositions organized by the Environmental Quality Authority in Jenin and Hebron provinces and the Gaza Strip.

Ahmad Halas, the general coordinator of the environmental exhibition, told Al-Monitor, “The three exhibitions were part of the EU-funded SwitchMed program implemented by the United Nations Environment Program. This is a project of great magnitude that includes several countries of the Mediterranean. It resulted from the Barcelona Declaration, which aims to protect the Mediterranean Sea from pollution. Palestine and 22 other Mediterranean countries have implemented the plan in an effort to push the countries of the region to benefit from resources and recycled material. The objective is for this to become a trend to be used in production and to diminish pollution.”

Engineers Rana al-Ghossein, Fidaa al-Shanti and Haya al-Ghalayini created a device that increases humidity in the air in order to generate water droplets. The droplets, which do not have trace minerals that are good for people’s health, are mixed with regular water. The device can generate a liter of drinking water per hour.

Ghossein told Al-Monitor, “Seventy percent of the air in the Gaza Strip is humid because the land is adjacent to the Mediterranean Sea. This is where the idea of a device that increases humidity and turns it into water came from. We have succeeded at the first try in turning 90% of the sample into water as we were able to generate four liters of drinking water in four hours. In generating this water, the device relies on a cooling system and filters to purify the condensed water.”

The engineers added solar panels to the device so it can function without electricity. Ghossein said, “The primary objective of our project is to find alternative methods to generate drinking water in the Gaza Strip since it suffers from a lack of groundwater. In fact, 98% of groundwater is not safe to drink because of the pollution. It was only natural to look for a source of power other than electricity because it is not consistently available given the power crisis that has been ongoing for the past 11 years. Solar cells were the best solution to this issue as they provided an ongoing source of energy for the device to generate water.”

Engineer Islam al-Amoudi created a device that strictly relies on sand to filter and recycle wastewater to irrigate plants. He told Al-Monitor, “The ongoing electrical cuts in Gaza led to a halt in stations treating wastewater. This pushed municipalities to empty untreated wastewater on the shores of the Mediterranean causing major pollution. The device does not need electrical power as it transfers wastewater to the set sand squares through air pressure. The water would thus move from a high pressure area to a low pressure area. The device would be able to treat the water using only sand by taking advantage of the filtration property of sand particles.”

Engineering graduates, environmental science graduates and companies interested in investing in environmental projects based on recycling attended the exhibition. This gave engineers Amira Issa and Ahlam Abou Zaher the opportunity to share their idea of recycling car tires and look for investors to fund it.

Issa told Al-Monitor, “Our idea is to recycle old tires and use them as a component in road surfacing. We would add them to the asphalt and use it to form a more cohesive mixture, increase the life of the road, decrease maintenance needs and save up to 80% in surfacing costs.”

She added, “We tried the idea on a small prototype, and it showed an improvement in rigidity. It also made the material less silky, which means that if the granules from car tires are to be added to the surface, it would be stronger and less slippery for cars driving in rainy conditions. This would also increase the life of the road 10 times.”

Adala al-Atira, the head of the Environmental Quality Authority in Gaza, told Al-Monitor, “The authority will work on networking between international organizations supporting environmental projects, the private sector in Palestine and the entrepreneurs participating in the exhibition so that they would be able to secure funding for their projects. This move would help support all projects relying on recycling and alternative power.”

She added, “All the ideas that the engineers and innovators brought forward in this exhibition focused on the problems in the Gaza Strip and tried to find solutions. For example, they tried finding natural alternatives to electricity, providing drinking water, treating wastewater and making fertilizer for food products.”

She pointed out that some projects in the environmental exhibition would not cost more than $500 to implement. The Environmental Quality Authority could support entrepreneurs with this small amount through grants or loans. She said the next step that the authority will implement is providing training. Environmental experts would train the new innovators and help them develop their ideas and projects so that they can later produce their projects without errors while achieving maximum efficiency.

Twenty environmental projects were showcased in the exhibition. The project leaders hoped to find real support for their work and a space for implementation in order to solve environmental issues in the Gaza Strip, which suffers from water pollution, scarce agricultural lands and consistent power cuts.