Analysts expect the four-month suspension in Port Sudan to accelerate the launch of the Transit Trade Agreement between Egypt and Sudan and eventually bring economic and political benefits to Egypt. 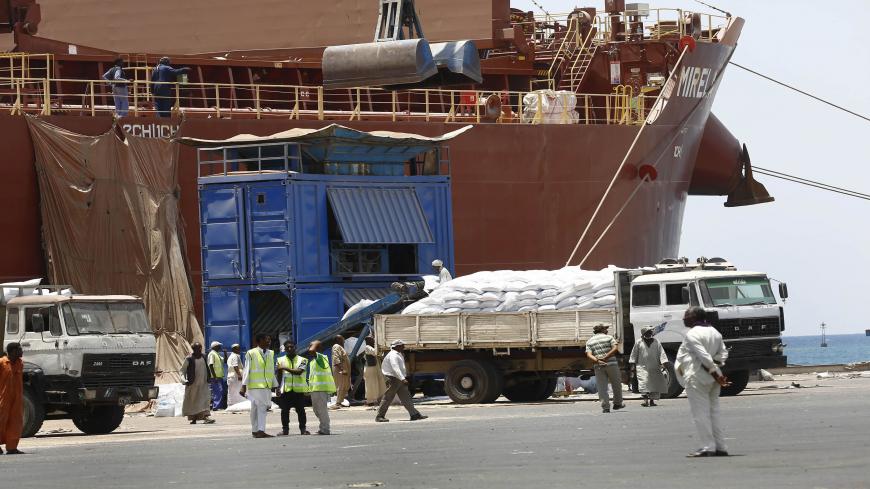 Sudanese dockers unload bags of sorgham (cereal) from one of two US ships carrying humanitarian aid supplies provided by the US development agency USAID, at Port Sudan on the Red Sea coast, June 5, 2018. - Ashraf Shazly/AFP via Getty Images

CAIRO — The monthslong suspension of Port Sudan, the main port in Sudan, has been bad news for Sudanese manufacturers and importers. But it could also expedite a new form of cooperation between Egypt and Sudan.

In a press release issued Jan. 12, Kampal Ali Kampal, chairman of the Chamber of Food Industries in Sudan, deplored the frequent disruption of cranes and loading equipment at Port Sudan.

He said that this frequent disruption led to the accumulation of goods at the port for more than four months, which damaged some of the goods and led the exporters to incur additional fees for keeping the goods at the port. Over the past four months alone, he noted, the total losses incurred by the food industries sector amounted to about $10 million.

Faraj Abdel Fattah, a professor of economics at the University of Cairo, told Al-Monitor that not only do the damages resulting from the stalled Sudanese export and import trade negatively affect the state’s resources and the economy in general, they also “adversely affect the lives of Sudanese citizens who are going through critical political circumstance amid recurrent protests against poverty and poor living conditions.”

“When Sudan imports goods [and they are kept at the port], some of these goods get damaged. As a result, goods are not always available [in Sudanese markets], and the huge fees paid to store the goods at the port for several months are affecting product prices. Meanwhile, foreign companies importing Sudanese goods are refusing to pay such fees on behalf of Sudanese exporters, who also incur delay penalties as a result of the goods not arriving on time, and this might eventually lead some exporters to bankruptcy,” he added.

In this regard, Abdel Fattah said that activating transit trade agreements between Egypt and Sudan could be a quick solution for Sudan to protect itself from economic and commercial isolation and to protect Sudanese exporters from bankruptcy and secure the Sudanese people’s needs of imported goods.

On Dec. 27, 2020, Egyptian Minister of Finance Mohamed Maait announced in an official statement that the joint meetings held between officials of the Egyptian Ministry of Finance and Sudanese businessmen at the headquarters of the Egyptian Customs Authority in Cairo had concluded an agreement to allow Sudanese exporters and importers to receive imports and exports through Egyptian ports, provided imports are transported from Egypt to Sudan and exports from Sudan to Egypt by land. This is what Maait dubbed as “transit trade.”

An informed source at the Ministry of Finance told Al-Monitor on condition of anonymity that the preparation of the ports in coordination with the Ministry of Transport and Communications, which is responsible for the port sector, is taking place quickly.

Asked about the expected benefits of the transit agreement between Egypt and Sudan, he said that Egypt is to obtain customs duties in return for goods entering its ports as well as fees for loading and unloading goods to and from the docks of the ports of Ain Sokhna and Suez.

He noted that the entry of Sudanese exports and imports into Egypt may create a new source of income for the shipping companies that will handle the transfer of imports and exports between the ports of Ain Sokhna and Suez on the one hand, and the land ports of Qustul and Arqin, located on the border between Egypt and Sudan, on the other.

The transit agreement will revive services on the land routes connecting the two countries, he added.

The Commercial Representation Authority of the Egyptian Ministry of Trade and Industry held Jan. 9 a meeting with the Egyptian side in the Egyptian-Sudanese Business Council, which is a federation made up of representatives of the chambers of commerce and industry of the two countries.

Despite the two sides’ interest in the commercial transit agreement between Egypt and Sudan, Wael al-Nahhas, an economic expert and financial adviser to a number of investment institutions, told Al-Monitor that while he encourages the agreement out of Egypt’s need to support the Sudanese, he does not expect the agreement to have a significant economic or customs return for Egypt because the volume of Sudanese trade with the world is limited.

He also ruled out that the agreement would contribute to reviving Sudanese trade “because Sudanese manufacturers, exporters and importers and the Sudanese government itself are grappling with a set of economic crises, hence the recession that cannot be solved by using alternative ports only.”

According to the World Bank, the volume of trade exchange between Sudan and other countries in 2017 amounted to about $14.5 billion, with $10.276 billion in imports and $4.240 billion in exports.

Kampala voiced another opinion. He told Al-Monitor that the size of the Sudanese international trade is only modest due to the Port Sudan disruption, which “caused exporters and importers in the Sudanese private sector alone about 100 million euros [about $121.25 million] in losses due to port fees and delay penalties. If this amount is invested in import, manufacture and export, the Sudanese trade will flourish and Egypt will benefit therefrom through customs duties, especially with the lifting of US sanctions on Sudan.”

Asked about the importance of the transit trade between Egypt and Sudan, Rashad Abdo, head of the Egyptian Center For Economic Studies, told Al-Monitor that besides its economic importance, this type of trade is of major political and strategic importance, as it boosts the alliance between Egypt and Sudan and encourages Sudan to converge positions with Egypt in regional crises such as the Grand Ethiopian Renaissance Dam crisis.