The repeated attacks against Egyptian nationals in Saudi Arabia may have become a phenomenon that has even escalated into killings lately in the absence of any deterrence. 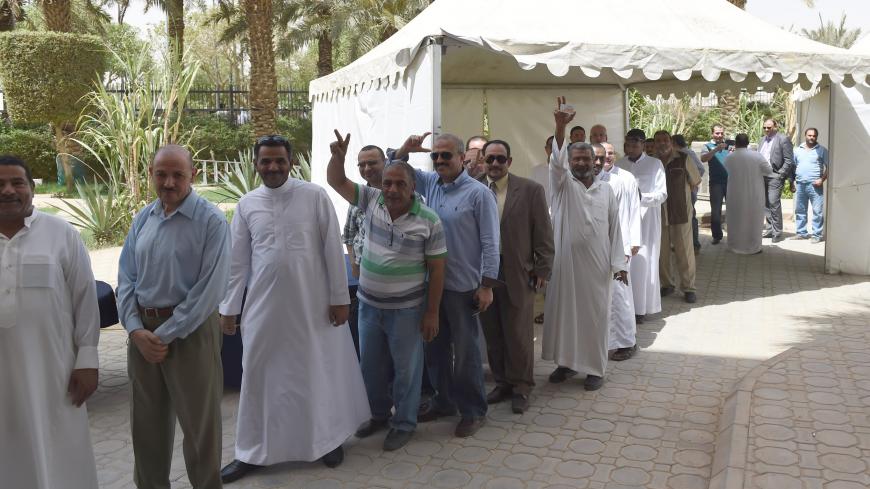 Egyptian men living in Saudi Arabia queue to cast their ballots in the early voting for the presidential elections on May 26-27, at the Egyptian Embassy Riyadh, Saudi Arabia, May 15, 2014. - Fayez Nureldine/AFP via Getty Images

According to the statement, the Saudi authorities provided the necessary supplies and fuel for the vessel’s return to Egypt in response to Egyptian demands, after ensuring the safety of the fishermen and that weather conditions are favorable.

It is not the first time that the Saudi authorities detain or attack Egyptian workers. There have also been incidents where Saudi nationals killed Egyptians in the kingdom. These repeated violations raise questions on whether or not attacks against Egyptians in Saudi Arabia are systematic.

An estimated 1 million Egyptians live in the kingdom.

On Dec. 28, 2020, Hani Abdel-Tawab, an Egyptian national and middle school English-language teacher in Saudi Arabia, was shot dead by some of his Saudi students.

Following an altercation between Abel-Tawab, 35, and his Saudi student, 13, in the classroom, the latter, along with his 16-year-old brother, waited for the teacher outside the school and shot him. The teacher was admitted into the intensive care unit and died a week later.

On July 28, 2020, news that a Saudi national killed two Egyptians in Saudi Arabia had angered the Egyptian street. Egypt’s Ministry of Immigration and Expatriates Affairs said that a Saudi national shot dead Adel Abdel Imam Hussein and Ezzeddin Mohamed Abdul Shafi in Riyadh, following a dispute between the Saudi citizen and the Egyptian workers who were carrying out construction works at his residence.

“The perpetrator confessed to murdering them and surrendered himself to the Saudi authorities,” the ministry said in a statement back then, adding that the bodies will be recovered when the investigation is concluded.

Similarly, Ali Abul-Qasim, an Egyptian engineer, was apprehended by the Saudi authorities in July 2017 and sentenced to death in the same year. Abul-Qasim was convicted of smuggling drugs into Saudi Arabia, although his family handed the Egyptian Ministry of Immigration evidence proving his innocence. On April 25, 2020, the Saudi judiciary issued a final ruling acquitting Abul-Qasim.

Speaking to Al-Monitor by phone, a source at Egypt’s Ministry of Foreign Affairs commented on the repeated attacks and violations by Saudis against Egyptians. He said, “These are mere separate incidents that people carry out, and do not rise to the level of a systematic phenomenon against Egyptian workers in Saudi Arabia.”

The government source, who declined to be named, noted that the Egyptian state has confidence in the fairness of the Saudi judiciary, and stressed that all perpetrators who committed crimes against Egyptian workers will be sentenced under the Saudi laws.

The source noted that there is ongoing communication and coordination between the Consulate General of Egypt in Riyadh and Saudi authorities so as to complete all necessary judicial procedures at the earliest possible time. The consulate is also closely and seriously following up on the investigations into the different cases that involve Egyptian workers.

Ahmad Gadami, a human rights lawyer at Al-Hilali Foundation for Freedoms, told Al-Monitor that the repeated attacks against Egyptians in the Gulf states, especially in Saudi Arabia and Kuwait, is a systematic phenomenon since they are being repeated lately in the absence of any deterrence, to the point that an Egyptian teacher was killed at the hands of Saudi minors.

He pointed out that there are 3 million Egyptian workers and employees in Saudi Arabia, stressing that such a large number of workers has contributed to the Saudi economic boom over the years and to the completion of multiple mega projects, namely in the construction field, as well as the teaching, judicial and other fields. The Saudi authorities must thus respect the great contributions of the Egyptian workers to such a Saudi advancement, he added.

Gadami called on the Egyptian authorities to officially interfere and push the Saudi authorities to put an end to such attacks against Egyptian workers in Saudi Arabia. He further called on Riyadh to punish the Saudi national who shot the Egyptian workers dead at his residence, as well as all other Saudis who attack Egyptians or treat them as slaves, not as workers or employees with rights.

Egyptian Ministry of Immigration spokeswoman Maha Salem perceived that despite the repeated attacks against Egyptian workers in Saudi Arabia, the Saudi community mostly deals with Egyptians as their brothers with whom they share long-standing relations.

Salem told Al-Monitor over the phone, “The way the media reports such attacks is blown out of proportion at times. The positive news that happens between the Egyptians and their Saudi brothers, however, is never being reported by the media.”