Egypt swoops in Saudi markets amid boycott of Turkish products 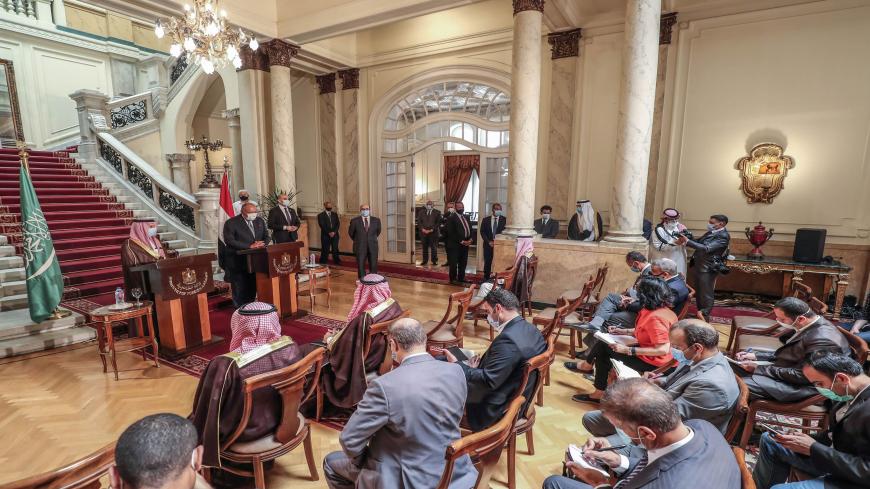 Egypt is trying to replace Turkish products in the Saudi market with Egyptian products, and it is exploiting the popular campaigns in Saudi Arabia that have been calling for boycotting Turkish products due to the disputes between Turkey and the kingdom.

Stores in Saudi Arabia have begun displaying Egyptian products in lieu of Turkish ones, according to a press report published by Agence France-Press Oct. 22. “In one of the stores in Riyadh, employees removed ‘Made in Turkey’ products off several shelves and replaced Turkish cheese with Egyptian cheese,” the report states.

In early October, head of the Council of Saudi Chambers Ajlan al-Ajlan called on the Saudis to boycott Turkish products, in response to the enmity between Turkey and Saudi Arabia.

Tension between Turkey and Saudi Arabia has been escalating since the assassination of Saudi journalist Jamal Khashoggi at the Saudi Consulate in Istanbul in October 2018. Turkish President Recep Tayyib Erdogan accused Saudi officials of being involved in the brutal murder at the time.

On Oct. 7, the Export Council for Building Materials, Refractories and Metallurgy Industries organized a video conference for Egyptian and Saudi companies to examine ways to boost cooperation between the two countries and to replace Turkish products, which are being boycotted by the Saudis.

Head of the council Walid Gamal el-Din told Al-Monitor, “The council organized the video conference for 14 Saudi companies and 11 Egyptian ones to discuss means of cooperation and to replace the Turkish product with the Egyptian one in the Saudi market.”

Gamal el-Din added, "The Saudi market is Egypt’s fourth-largest market for imports in the construction material industry. Egyptian construction material imports [in Saudi Arabia] reached $197 million during the first eight months of 2020, despite the coronavirus pandemic. The imports are expected to rise since the Turkish products have been hit hard by the popular boycott.”

Media figure Mohammad al-Baz launched on his show on Egyptian Al-Nahar TV a boycott campaign of Turkish products in Egypt and called on Egyptians to support the Saudis and pressure Turkey economically.

On Oct. 25, Adel Hanafi, vice president of the General Union of Egyptians in Saudi Arabia, which includes Egyptian nationals working in the kingdom, called on Egyptian chambers of commerce to boycott Turkish products, like Saudi Arabia has done.

Hanafi said, “The Federation of Egyptian Chambers of Commerce must organize boycott campaigns of Turkish products in order to prevent Turkey from using these products’ returns to fight Egypt and support terrorism in Arab states.”

The trade movement between Egypt and Turkey has witnessed so far this year a decline of 18.7%, according to the report of the Egyptian Central Agency for Public Mobilization and Statistics. “The trade activity dropped to $2.7 billion during the first seven months of 2020,” the report states.

In Saudi Arabia, Turkish products have been negatively affected by the boycott campaigns. On Oct. 21, head of the Turkish Exporters Assembly Ismail Gulle said during a video conference on marketing natural stones in Ankara, “Boycotting Turkish products in Saudi Arabia is among the key factors that impacted our activity this year."

In an Oct. 13 press statement, head of the Turkish Contractors Union Medhat Yeni Gon, confirmed that “Turkish contractors in the Middle East have suffered losses estimated at $3 billion at least in 2020, due to the [campaign] against Turkey.”

In a conversation with Al-Monitor, the chairman of the Engineering Export Council of Egypt, Sherif al-Sayyad, said, “Saudi Arabia’s boycott of Turkish products is a good opportunity for Egyptian companies.”

He noted that the Egyptian industry has made great strides in engineering products, especially in the manufacture of household appliances, electrical appliances, and household and cooking utensils. According to him, it has gained a place in the Saudi market.

He added, “The state must take advantage of the opportunity to boycott Turkish products in Saudi Arabia by supporting Egyptian exports and facilitating export procedures for Egyptian businessmen.”

Ahmed Jaber, president of the Chamber of Printing and Packaging Industry, Federation of Egyptian Industries, told Al-Monitor, “The chamber is currently examining the Saudi market to replace Turkish products with Egyptian ones, and it is communicating with the Federation of Saudi Chambers of Commerce to discuss ways of cooperation.”

He noted, “Egyptian businessmen are moving quickly with Saudi companies to conclude trade agreements and deals, taking advantage of the popular boycott of Turkish products in Saudi Arabia.”

Jaber concluded, “The Egyptian Ministry of Trade and Industry is trying to remove obstacles in order to export Egyptian products to Saudi Arabia, in support of the Egyptian product as opposed to its Turkish competitor.”