Egypt is seeking to bypass Turkey in Ghana by strengthening relations and cooperation agreements in several fields with the West African country. 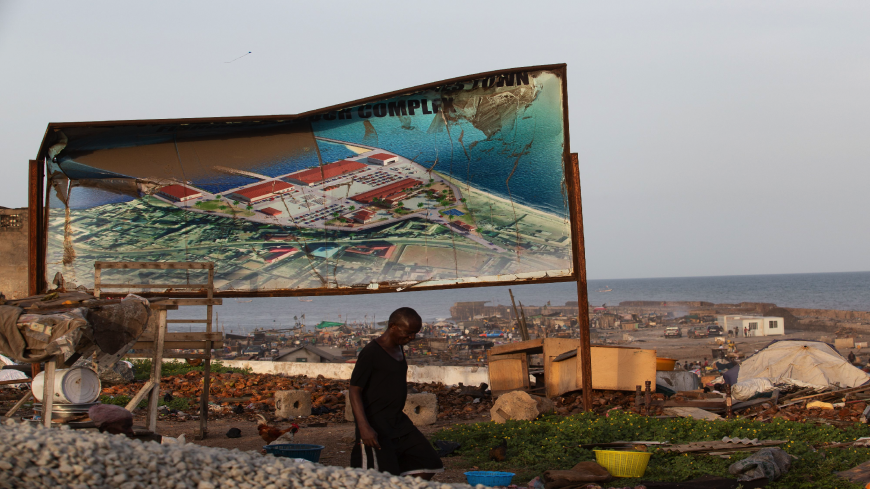 A man walks under a billboard showcasing the plan of the fishing port complex in James Town, Accra, on May 21, 2020. - NIPAH DENNIS/AFP via Getty Images)

Egypt seeks to extend its influence on the continent of Africa, notably in Ghana, as Egyptian President Abdel Fattah al-Sisi confirmed his country’s keenness to strengthen relations and cooperation with the West African country during a Jan. 5 meeting with Annan Kato, the special envoy of Ghana’s president.

Sisi also discussed during the meeting several issues of bilateral cooperation between Cairo and Accra in the fields of trade and investment.

Egypt and Ghana enjoy strong economic and trade relations. The latest statistics by the Egyptian Commercial Representation Office in Accra showed that the volume of trade exchange between the two countries jumped to $108.3 million in 2018, from $70.1 million in 2017, which is a 54.5% increase.

According to the State Information Service, Ghana is the fourth market in Africa to receive Egyptian exports after Kenya, Nigeria and Ethiopia.

Moreover, a Jan. 6 report on economic ties between the two countries in Egypt’s al-Bawaba News said that “the most important Egyptian exports to the Ghanaian market are construction materials, paint, cement and steel structure for buildings, foodstuff, juices and buses. Meanwhile, Egypt’s imports from Ghana include cocoa and timber for the furniture industry.”

Cairo has also concluded several economic and commercial cooperation agreements with Ghana. The state-owned EgyptAir agreed with the Ghanaian government in October 2020 to establish a Ghanaian national airline company with joint Egyptian-Ghanaian investment.

In November 2020, Egypt’s Ambassador to Ghana Emad Hanna discussed with officials from the Ghana Railway Development Authority the possibility of launching a partnership between Egypt and Ghana to develop the Ghanaian railway sector.

In 2017, the two countries signed a memorandum of cooperation in the field of communications and information technology, which included transferring Egyptian expertise to the West African country in the field of electronic applications and e-governance.

Egypt’s moves in Ghana are in tandem with Turkey’s insistence on expanding its influence inside Ghana. Turkish President Recep Tayyip Erdogan visited Ghana for the first time in 2016 when he concluded several memoranda of understanding in the fields of information technology, and to promote and protect mutual investments, sports and youth with Accra.

“Turkey wishes to strengthen its political, military, economic, cultural and commercial ties with Ghana,” Erdogan said during the visit.

According to a report on the Turkish website Ahval, “Erdogan’s government is seeking to gain a foothold in Ghana through the Turkish Cooperation and Coordination Agency, which provided teaching and educational equipment to a primary school in the Ghanaian capital of Accra.”

“Ankara inaugurated the Republic of Turkey Street in Accra as well as the Ummah Mosque, which is one of the largest mosques in Ghana,” the report said, adding that “the Turkish Red Crescent had sent humanitarian aid to the country in order to consolidate Turkish influence there.”

The newspaper Emirati Al-Ain reported that the Turkish Hudayi Foundation — which is affiliated with the ruling Justice and Development Party (AKP), which is associated with the Muslim Brotherhood in Turkey — has built schools and mosques in African countries, including Ghana.

In a related context, Mona Amr, former assistant to the foreign minister for African affairs, told Al-Monitor, “Egypt is interested in consolidating its relations with Ghana, especially since the latter hosts the Secretariat of the African Continental Free Trade Area (AfCFTA) and plays a major role in the AfCFTA Agreement.”

Ghana announced on Jan. 6 the beginning of work under the AfCFTA Agreement, which provides for the gradual elimination of customs tariffs and incentives for investments between African countries that are signatories to the agreement, which includes Egypt.

“Egypt is interested in the AfCFTA Agreement, as it gives Egyptian exports a competitive advantage through lower prices and it facilitates shipping and transport to the African market like Ghana. This would contribute to increasing the competitiveness of Egyptian products against Turkish goods, which flood the African markets, notably Ghana,” Amr added.

“The Egyptian government encourages Egyptian businessmen to invest in Ghana,” Amr said, stressing that there are “a large number of investors in Ghana and several projects in the country with Egyptian funding, such as the Military Hospital.”

“Egypt is well aware that Ghana is one of the countries that are politically active in West Africa and is leading that region,” Amr added, noting that “Cairo also benefits from its economic ties with Ghana, which has gas and gold resources.”

“Cairo, on the other hand, is working on strengthening its economic and political ties with Ghana to block the influence of any state that is exploiting its presence in Africa to undermine economic interests, such as Turkey,” she added.

For his part, Tarek Fahmi, a professor of political science at Cairo University, told Al-Monitor, “Generally, Egypt is pursuing a strategy to gain a foothold in Africa, especially since it was the head of the African Union (from February 2019 to February 2020).”

“Egypt seeks to have a presence in African countries, especially in those where Qatar and Turkey are present. This is why Cairo has been intensifying its moves in Ghana in a bid to thwart Turkey in its attempts to extend its influence to Accra,” he added.

Fahmi said that “Cairo possesses economic and social tools to be present in Ghana through economic agreements. It has also sent Egyptian experts to the country.”

“Al-Azhar Foundation and the Orthodox Church are Egypt’s strong cards to extend its influence in Ghana, especially with religious missions to the country and the provision of humanitarian services. Similarly, Turkey has been also trying to consolidate its presence in Ghana, through humanitarian aid and the building of mosques and schools,” he concluded.