How Egypt plans to excavate antiquities submerged under Alexandria waters

Alexandria University launched a new project to excavate and preserve underwater artifacts, in a bid to revive tourism and protect Egypt's underwater heritage. 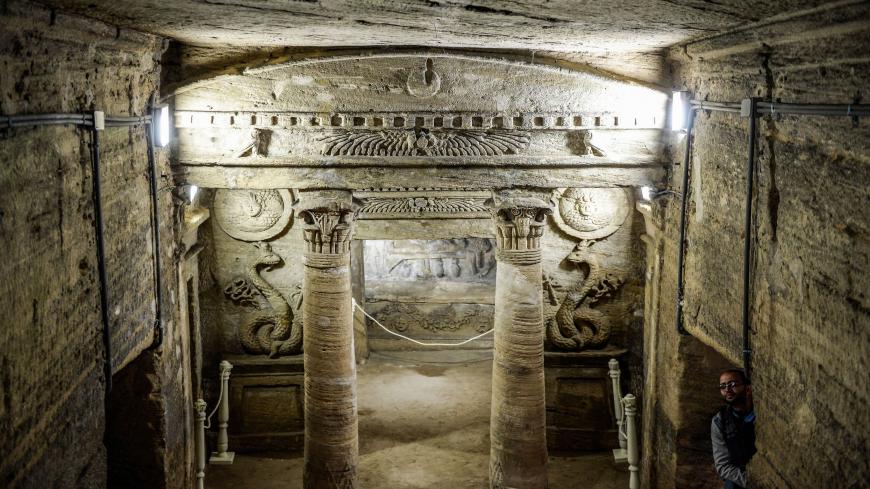 This picture shows a view from inside the catacombs of Kom El-Shoqafa (Mound of Shards), dating to the Roman period, during the inauguration of a project to drain groundwater from the archaeological site, in the center of the coastal city of Alexandria, Egypt, March 3, 2019. - Mohamed el-Shahed/AFP via Getty Images

CAIRO — Alexandria University inaugurated Jan. 1 a new project dubbed “Underwater Heritage” aimed at excavating underwater artifacts in the eastern port of Alexandria in the northern coast of Egypt. The project is led by Emad Khalil, director of the Alexandria Center for Maritime Archaeology and Underwater Cultural Heritage, and carried out in collaboration with the Egyptian National Commission for UNESCO and a number of European partners in support of the project.

President of Alexandria University Abdul Aziz Qanswa said in a statement Jan. 1 that this project will ensure that Egypt's underwater heritage is not lost, describing the project as a qualitative leap in the tourism sector given the treasures and antiquities dating back thousands of years.

Speaking to Al-Monitor, Ehab Fahmy, head of the Underwater Antiquities Central Department at the Ministry of Antiquities, said that there are underwater treasures under the eastern port of Alexandria, namely the Royal Quarters dating back to the Ptolemaic period, including royal ports and columns from the palaces during that period. The eastern port stretches over an area starting at the Silsila promontory to the east toward the Citadel of Qaitbay to the west.

Fahmy believes more antiquities will be excavated through the project, which will also guarantee their preservation. He said, “The Alexandria governorate is floating on submerged priceless antiquities, and the excavation works are designed to show how great the Egyptian civilization is and tell the world about such a human heritage, which is not only the property of Egypt but that of humanity.”

Alexandria is well known for its archaeological sites where thousands of artifacts are submerged underwater, most notably the ancient Citadel of Qaitbay that covers an area of ​​22,500 square meters and houses more than 3,000 artifacts dating back to the Greek and Roman civilizations. Also in the Egyptian port city lies the Pharos (Lighthouse) of Alexandria, which is one of the Seven Wonders of the World.

Fahmy said that his department at the Ministry of Antiquities has paid great attention to underwater antiquities lately, by holding excavation skills training workshops to the workers and by involving international organizations in the excavation and restoration activities.

In 2001, Egypt signed the UNESCO Convention on the Protection of the Underwater Cultural Heritage. The convention involves preserving the submerged cultural heritage for at least 100 years, and preventing theft or illegal practices.

On Jan. 20, 2020, the Central Department of Underwater Antiquities in Alexandria launched a training seminar for its employees on the most up-to-date methods for underwater archaeological excavation based on the latest studies in this regard.

The Ministry of Antiquities inaugurated May 6, 2020, the Antiquity and Information Initiative to raise awareness of the antiquities and introduce the Alexandria underwater cultural heritage to Egyptians and foreigners. The initiative involved weekly news published in Arabic, French and English about underwater sites, along with photos of those items recovered from the sites or those that are still submerged.

Fahmy said, “We are in constant need to cooperate with our European partners and international organizations to excavate submerged antiquities in particular, given that the excavation activities are extremely difficult, unlike the excavation of antiquities on the ground. The excavation of submerged antiquities is carried out in three stages. First, a team of specialists from the Ministry [of Antiquities] searches for antiquities using specific devices to identify how deep they are and their exact position. Second, divers extract antiquities from under the water, and this is an extremely difficult process given the time and effort required from the divers. The third stage involves the maintenance and cleaning of antiquities from water and salt, before their restoration and repair.”

He added, “After the completion of this project, we aim for additional exhibitions of submerged antiquities abroad in order to introduce this human heritage to the world, until the plan [to build] an underwater antiquities museum materializes.”

In 2015, the Ministry of Antiquities had announced a plan to build an underwater antiquities museum at a cost of $150 million. If achieved, the museum would be the first underwater museum for ancient Egyptian civilization in the world. The plan has yet to be implemented.

Monica Hanna, archaeologist and founder of Egypt's Heritage Task Force, told Al-Monitor that the idea of ​​setting up an underwater antiquities museum was part of an attempt to protect this heritage from looting. Yet the ministry’s poor resources and limited capabilities prevented its implementation over the past years.

In March 2020, Egypt’s parliament ratified a bill submitted by the government to amend Antiquities Protection Law No. 117 of 1983. The amendments stipulate that whoever acquires or sells an antiquity or part of it outside Egypt shall be fined with no less than 1 million Egyptian pounds ($63,850).

According to members of parliament, the amendments aim to protect Egypt's antiquities under the law and to end all disastrous and unlawful acts of stealing, trafficking, sabotaging and destruction.

On July 29, 2020, a number of divers in Hurghada discovered a ship in the Red Sea that had sunk decades ago; it had been cut in parts and the ship's contents had been removed.

Hanna said, “There is a clear tendency at the ministry to exploit this heritage to promote tourism, with Egyptian submerged antiquities displayed abroad. The ministry’s interest in this regard will reflect positively on the Egyptian economic situation.”

An exhibition dubbed “Treasures of Ancient Egypt: Sunken Cities” was inaugurated July 3, 2020, at the Virginia Museum of Fine Arts in Richmond, Virginia. The exhibition displayed 293 artifacts recovered from the sunken cities of Heracleion and Canopus in the eastern port of Alexandria and Abu Qir port, including large statues of the goddess of Isis, Serapis as well as statues of the Sphinx.