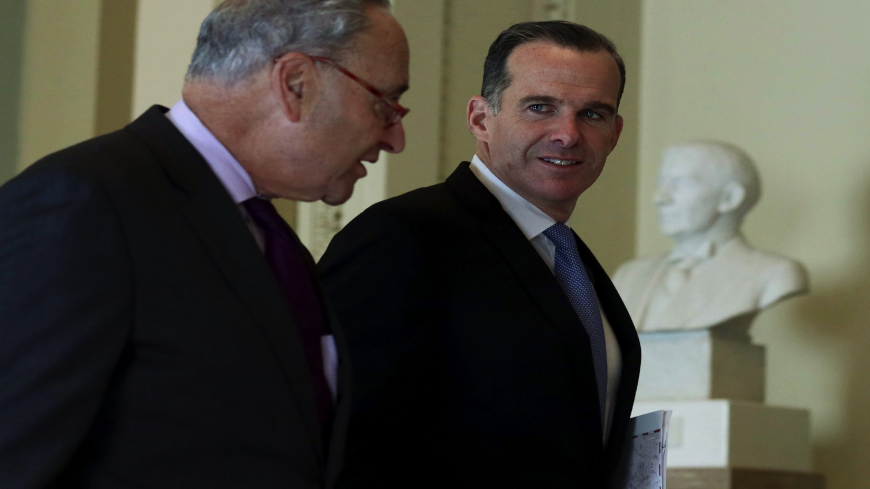 US Senate Minority Leader Sen. Chuck Schumer (D-NY) (L) walks with Brett McGurk (R), former special presidential envoy for the Global Coalition to Counter ISIL, at the US Capitol, Oct. 23, 2019, in Washington, DC. McGurk was appointed to the position by President Barack Obama in 2015. He resigned from his post on Dec. 31, 2018, because of Donald Trump’s decision to withdraw troops from Syria. - Alex Wong/Getty Images

President-elect Joe Biden is expected to choose Brett McGurk, the former envoy to the US-led international coalition to defeat the Islamic State (IS), for a White House role managing US policy in the Middle East and North Africa.

McGurk’s selection as National Security Council's coordinator for Middle East and North Africa was first reported by The New York Times and CNN and confirmed to Al-Monitor by a former US official familiar with the decision.

Why it Matters: McGurk previously oversaw the formation of the US-led, multinational military coalition to destroy IS in Iraq and Syria. He was appointed to that position in 2015 by then-President Barack Obama and stayed on until moving up his resignation following President Donald Trump’s snap order to withdraw US forces from Syria in December 2018.

His expected appointment will likely send a strong signal to Turkey and could complicate the Biden administration's efforts to reset relations with the NATO ally.

The former envoy has criticized Trump’s orders to withdraw US forces from Syria and has lambasted Turkey’s military incursion against the YPG. He has also criticized Turkey for not securing its southeastern border as foreigners streamed into Syria to join IS earlier in the conflict.

McGurk is the latest former Obama-era official to be tapped by the incoming Biden administration. Wendy Sherman, who served as undersecretary of state for political affairs during the Obama administration and was a lead negotiator in the 2015 nuclear negotiations with Iran, is set to become deputy secretary of state under Antony Blinken, Politico first reported.

The picks suggest Biden intends to take a tougher stance toward Turkey’s President Recep Tayyip Erdogan and Russian President Vladimir Putin than Trump, and that he intends to lead Iran policy with diplomacy rather than sanctions and military force.

What’s Next: More veterans of the Obama administration are expected to be announced by the Biden team in the coming weeks. Democrats gained control of the Senate on Wednesday in narrow runoff voting in Georgia, opening the path for the president-elect’s nominees to be approved.