A no-name group claiming to work against the US-based Turkish cleric Fethullah Gulen has called for the arrest of US diplomat Brett McGurk, the most recent American to be targeted by supporters of the Turkish president. 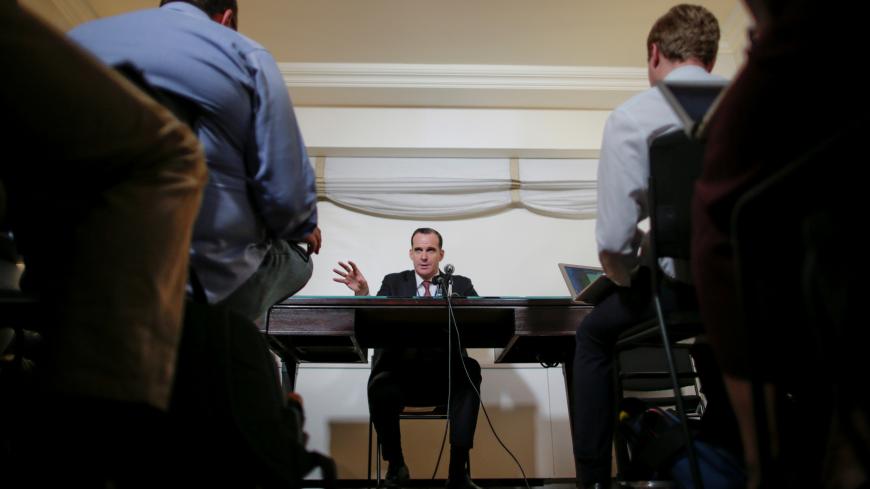 US envoy to the coalition against the Islamic State Brett McGurk speaks with media at a briefing during the 72nd United Nations General Assembly meeting in New York, Sept. 22, 2017. - REUTERS/Eduardo Munoz

Anti-Americanism in Turkey plumbed new lows today as a Turkish civic association petitioned a court in the western port city of Izmir to issue an arrest warrant for prominent American diplomat Brett McGurk.

A heretofore unknown outfit called "The Platform for Civilian Struggle against the Fethullah Terrorist Organization" was apparently established to work against Fethullah Gulen, the Pennsylvania-based Sunni preacher who is accused of engineering last year’s coup attempt, and his purported terror network known as FETO. It claimed that Brett McGurk, the presidential envoy to the global anti-Islamic State coalition, had sought to “overturn Turkey’s constitutional order” in concert with “terrorists.” These were named as the Kurdistan Workers Party (PKK), which is fighting the Turkish army for Kurdish self-rule, and its Syrian allies, the People’s Protection Units (YPG) and the latter’s political arm, the Democratic Unity Party.

The move followed calls this week by a pro-government columnist for McGurk’s detention. Prosecutors have already issued warrants for the arrests of two other American citizens: prominent academic Henri J. Barkey and long retired CIA official Graham Fuller on the grounds that the pair had helped mastermind the botched putsch. The pro-government media has dutifully fabricated mind-bending reports to substantiate the allegations, which both men stoutly deny.

Fuller said in a statement, “I retired from the CIA exactly 30 years ago. I have not set foot in Turkey in five years … I am only marginally swept up among many Turks in the ongoing wave of arrests, persecutions and cashiering of tens of thousands of Turks … all perceived as enemies of [Turkish President Recep Tayyip] Erdogan’s state.”

The legal hounding of Americans is part of a broader pattern of tit for tat over the United States’ refusal to extradite Gulen and another former Erdogan associate, Reza Zarrab.

The Iranian-Turkish gold trader has become a star witness for the prosecution in the ongoing trial of Mehmet Hakan Atilla, a senior executive for the Turkish state-owned Halkbank, which allegedly played a pivotal role in a massive scheme to help Iran evade US sanctions. Zarrab claimed in court that members of Erdogan’s government cooperated in the scheme in exchange for astronomical bribes and that he was given assurances by a Cabinet minister that Erdogan had personally authorized the illicit trade.

In an ironic coincidence, McGurk, a Columbia University-trained lawyer, clerked in the Southern District of New York court where the trial is being heard.

Few believe Turkish prosecutors will act against McGurk. Aaron Stein, who is a resident senior fellow at the Atlantic Council’s Rafik Hariri Center for the Middle East, told Al-Monitor, “For now, it seems like a side show. What should give everyone pause is that this anti-FETO [association] is reacting to news from state-controlled media.” Stein believes the real question is whether “this is an overzealous group and a minor prosecutor [acting on their own] or the start of another phase of crazy warrants being issued in Turkey.”

That the anti-FETO group failed to even spell McGurk’s name correctly, repeatedly referring to their prey as “Brett H. McGruk,” suggests the former. But somewhat ominously, they based their accusations against McGurk on the testimony of Talal Silo, a former spokesman for the YPG-dominated Syrian Democratic Forces (SDF) who surfaced in Turkey in mid-November. Turkey claims Silo defected.

YPG and coalition officials say it's more likely Silo was blackmailed by the Turkish authorities into delivering scripted comments designed to embarrass the coalition and whip up further anti-American hysteria inside Turkey.

In a three-part “interview” with the state-run Anadolu news agency this week, Silo contended that the United States, and McGurk in particular, had deliberately misled Turkey about its relationship with the YPG, looking the other way as weapons intended for the SDF wound up in the PKK’s hands.

Since 2005, McGurk has served in successive administrations, mainly crafting policy on Iraq and more recently Syria. The pro-government media in Turkey continually slanders McGurk over his perceived affection for the YPG. To be sure, he played a key role in helping plot the coalition’s highly successful campaign against IS with the help of the YPG.

That the Syrian Kurdish militia, which has thousands of female fighters within its ranks, proved the most able force against the jihadis is no accident. Many of the commanders overseeing and training the group honed their skills fighting Turkey with the PKK, which is on the State Department’s list of terrorist organizations. But the YPG is not designated as such, allowing the Pentagon to work with the group. The loophole drives Turkey mad, and it holds McGurk personally responsible.

In May, tuning out Turkish protests, President Donald Trump authorized the Pentagon to arm the YPG directly in preparation for the battle to liberate Raqqa. Then, too, Turkey focused its ire on McGurk, with Turkish Foreign Minister Mevlut Cavusoglu going as far as to publicly call for the envoy to be sacked.