Wall Street has started trading in water futures contracts, just like gold, oil and basic commodities, coinciding with the stalled negotiations between Egypt, Ethiopia and Sudan over the Grand Ethiopian Renaissance Dam, which raises the question of whether Egypt will agree to sell the Nile waters. 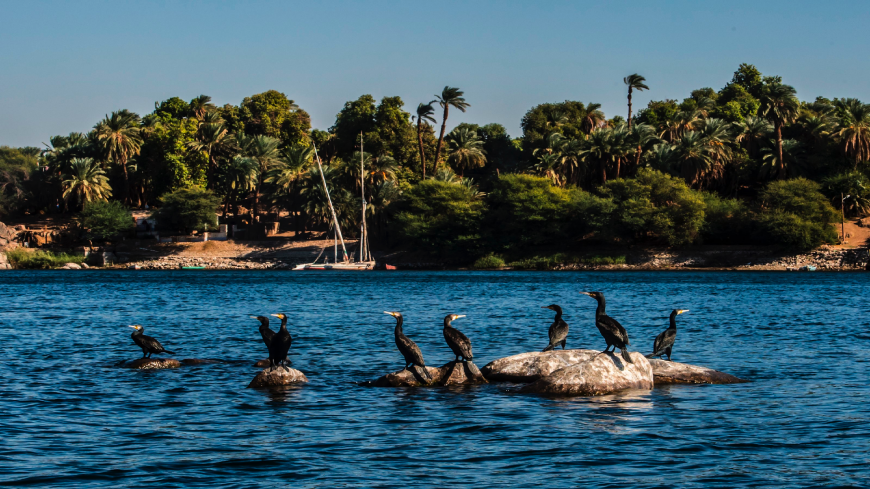 Cormorants gather on the Nile River near the southern city of Aswan, some 920 kilometers from the capital, Cairo, on Nov. 26, 2017. - KHALED DESOUKI/AFP via Getty Images

CAIRO — As of Dec. 8, Wall Street started trading futures contracts in water, just as it does in gold, oil and basic commodities. This is the first time trading in water as a commodity has taken place in any stock market.

This comes at a time when negotiations between Egypt, Ethiopia and Sudan on the Grand Ethiopian Renaissance Dam (GERD) are at a standstill, which raises the question of whether Egypt will agree to sell Nile waters.

The three Nile Basin countries have been engaged in laborious negotiations to agree on mechanisms of filling and operating the GERD, which Addis Ababa began building on the Blue Nile in 2011. No binding legal agreement has been reached yet due to Ethiopia’s insistence on filling the dam without reaching an agreement with the two downstream countries, Egypt and Sudan.

On Dec. 15, Sudan and Ethiopia agreed to resume the faltering negotiations after Sudan had boycotted a round of talks in mid-November in objection to the negotiation approach between Egypt and Ethiopia.

There are no previous agreements on pricing and selling water between countries. Yet Turkey had vainly attempted to sell water to Israel and Gulf states through the Peace Water project, a pipeline that crosses through the Euphrates and Tigris rivers. Attempts of the Nile Basin countries for water sale and pricing also failed.

Egyptian TV host Ahmed Moussa, who is close to the government, said back in January on Sada el-Balad satellite channel that “Ethiopia wants all the Blue Nile water, and it also wants to sell water to Egypt. But Egypt will not take this lying down.”

Ahmad al-Fata, a Sudanese international law expert and former member of the GERD negotiations team in Khartoum, believes Ethiopia will not sign a binding agreement on the operation and filling of the GERD in order to avoid any commitments that would hinder its plans to control Nile waters. Ethiopia, according to Fata, also seeks to impose a de facto policy and price and sell water to Egypt and Sudan.

Egypt's former Assistant Minister of Foreign Affairs Mona Omar told Al-Monitor that pricing and selling Nile water is not a new idea and could be proposed again. She said Ethiopia had already suggested to Egypt, before the construction of the GERD, selling water to Israel. Egypt refused this suggestion and managed to convince the African countries that Nile water is a right to life rather than a tradable commodity, and cooperation and understanding are the only means to development, Omar said.

She added that Ethiopia still wants to control, sell and price Nile waters regardless of the potential harm to Egypt and Sudan and their citizens’ lives and national security, which violates international law.

Omar continued, “Egypt will not accept to sell Nile water, and it has so far succeeded in standing its ground. The current disputes in negotiations between Egypt, Ethiopia and Sudan revolve around the GERD operation and management and storage in times of drought and extended drought. The pricing and selling of water is not currently on the table.”

She noted that the internal conflict raging in Ethiopia’s Tigray region for over a month now is behind the faltering and frozen GERD negotiations. She believes stability in Ethiopia is important in order to move forward with a binding, written, legal agreement that states Ethiopia will not harm Egypt’s and Sudan’s rights to Nile waters in order to preserve water security. The binding agreement would also include Ethiopia’s commitment not to begin filling the GERD reservoir during drought periods.

Hani Raslan, head of the Nile Basin Studies at Al-Ahram Center for Political and Strategic Studies, believes that trading in water futures contracts for the first time in the US stock market is a dangerous indicator of trading in Nile waters. For around two decades, there has been a global inclination to shift attention to water as a human right and a rare commodity, like oil and petroleum, which must be preserved and developed, he said, adding that this idea is discussed at international water conferences.

Raslan told Al-Monitor, “Ethiopia considers the Blue Nile water the lake of Ethiopia, which was expressed by its former Minister of Foreign Affairs Gedu Andargachew on July 22 on his Twitter account. For that reason, it began filling the GERD despite failing to reach an agreement with Egypt and Sudan, in violation of international law. It did not stop there, but it is also considering building three other dams — Caradobi, Mandaia and Bica-abo — to seize a further 200 billion cubic meters, which puts Egypt at risk of water shortage and drought.”

He added, “If Ethiopia is able to proceed with filling the GERD and building the other three planned dams, then it can transform ​​selling and pricing the Nile water into a fait accompli and start implementing it. But Egypt will not accept such a step in any way because it is beyond its economic potential. It also violates international law that is on the side of Egypt, which is facing serious harm and threat to the lives of more than 100 million people who depend on fresh water.”

He accused Egypt of failing to take a decisive stance on Ethiopia's repeated refusal to sign a binding agreement on the operation and filling of the GERD, whereby Ethiopia would commit not to harm the water interests of Egypt and Sudan and not to build new dams before an agreement is signed with the two countries. Addis Ababa refuses such an agreement, considering it an interference in its national security and sovereignty.

Former Egyptian Minister of Irrigation and Water Resources Mohamed Nasr Allam believes that water trade on the US stock market is a purely local matter and far from new. Water sale and purchase have been around since the 1970s when water quotas were distributed to be used in agriculture, he said. Trading in water on the stock market is the new aspect, but it cannot be generalized on agreements between countries because it did not happen and international law is the regulating authority, according to Allam.

He told Al-Monitor, “There were previous repeated demands from the Nile Basin countries to sell and price water, but Egypt has been categorically opposed to the idea because it constitutes a grave threat to its national security.

Dia El Din Ahmed Hussein El-Quosy, adviser to the former minister of irrigation and water resources, said that Egypt cannot accept the idea of ​​selling and pricing Nile waters because it is harmful. Egypt depends on the Nile to meet more than 90% of its needs and does not have alternative sources to compensate for that. Egypt’s economic capacities do not allow it to purchase its water needs. Therefore, this idea is unlikely.

He told Al-Monitor, “South Africa’s mediation to sponsor the tripartite negotiations on the Ethiopian dam was not successful due to its siding with Ethiopia at the expense of Egypt and Sudan. As a result, the negotiations froze more than once, and a binding agreement was not reached.”