Are there signs of thaw in Turkish-Saudi relations?

A phone call between the Turkish and Saudi leaders generated hopes for thawing of relations between Ankara and Riyadh, but significant roadblocks must be removed to end bellicose affairs. 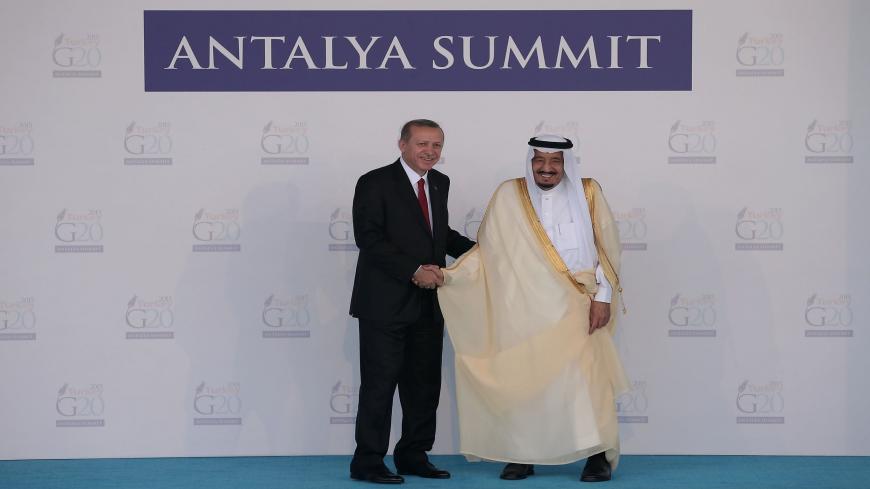 Indeed, Saudi Arabia sent humanitarian aid following the earthquake in Izmir in early November. When asked why this aid was not covered in Turkish media, a senior Turkish diplomat speaking to Al-Monitor on condition of anonymity said, “The aid offered came six days after the earthquake, and right around the time Biden was elected [in the United States]. We did not think much of it.”

Another senior bureaucrat told Al-Monitor, “Erdogan called Bahraini King Hamad bin Isa Al Khalifa Nov. 12 to offer his condolences for the late Bahraini prime minister, but the real reason was to send a message to Riyadh that we are ready to talk.” These friendly gestures and phone calls right before the G-20 meeting in Saudi Arabia was interpreted as a first step for thawing relations.

The growing rivalry with Saudi-led Arab states and its political and economic implications are rarely published in Turkish prime-time news. Therefore, discussions of a possible thaw in relations is not a public issue for Erdogan. However, it seems Ankara was pleased to see a significant decrease in anti-Turkey social media posts. “We observed a drastic fall in the pace of media campaigns directed against Turkey since the Saudi king’s phone call. The ruling family and well-known figures on Twitter affiliated with Riyadh have curtailed their attacks,” a prominent pro-Justice and Development Party media observer told Al-Monitor.

Kristian Coates Ulrichsen, a fellow for the Middle East at Rice University's Baker Institute, told Al-Monitor, “My view is that the relationship with Turkey is one issue the Saudi leadership feels that it can act to improve ahead of the Biden administration taking office in January — in part to lessen the potential isolation of the kingdom should Saudi fears about a hostile

The timing of attempts to thaw relations can be attributed to the Biden presidency. Despite bitter rivalry among Riyadh and Ankara, both countries enjoyed significant benefits from the Trump administration. In the last four years, Saudi Arabia and Turkey have been engaged in a competition for the leadership of the region. The secretary-general of the Arab League has recently denounced Turkish interventions in the region as reckless and raised a red flag for the Biden administration about Ankara as a source of instability in the region.

The Trump administration's harsh sanctions have helped contain Iranian expansion in the region. With Trump out of the picture, Iran can only improve its economic and political standing and its role will gain more prominence. This possibility will increase Saudi vulnerabilities significantly.

Ankara also sees that the 2017 Saudi-led boycott against its staunch ally Qatar has utterly failed. Efforts to end the diplomatic rift among Gulf Cooperation Council countries have been intensified. Ankara’s goal has been to isolate the United Arab Emirates and to make amends with Saudi Arabia and other countries in the region. “The breakdown in relations with Turkey seems to have been more of an issue for the UAE than for Saudi Arabia, the close Riyadh-Abu Dhabi relationship notwithstanding. So Saudi-Turkey relations may have been identified as one issue that can be addressed fairly quickly and relatively painlessly from Riyadh's point of view,” Ulrichsen said.

Turkey may have one leverage over Riyadh. That is the 2018 murder case of journalist Jamal Khashoggi. After seeing Trump’s unwillingness to confront Saudi officials, particularly Crown Prince Mohammed bin Salman, Erdogan has softened his rhetoric about the matter. However, “just as a win-win scenario for us, we can bring it back up now that Biden is in charge. It will be a good test for the incoming administration’s democratic credentials as well as a good bargaining chip against Riyadh,” commented a senior Turkish bureaucrat.

As the Turkish economy sags, Erdogan is eager to contain the Saudi sphere of influence in the region to ensure the enmity does not cause further damage to Turkish interests. The news that Turkey’s competition authority has approved investment rights to Saudi Aramco raised eyebrows among the Turkish opposition in late November. The economic concerns and changing global politics may not be sufficient to reset the relations between Riyadh and Ankara. There are two main impediments.

Erdogan, who considers his Gulf rival to be Crown Prince of Abu Dhabi Mohammed bin Zayed Al Nahyan, rather than Crown Prince Mohammed, is hoping to divide the Gulf leaders on relations with Turkey. This is more complicated than it sounds. Ankara is determined to fight for the interests of the Muslim Brotherhood in the region. This means providing refuge for exiled members of the movement, but also coordinating mosques and networks all around the region and even in Europe.

Saudi Arabia has shown no indication that it will soften its tone or battles against the movement. Indeed, just on Nov. 11, the Council of Senior Scholars in Saudi Arabia published an announcement criticizing the "disruptive" behavior of the movement and calling it a terrorist organization. In the days to follow, Emirati Fatwa Council declared the outlawed group a terrorist organization.

The Muslim Brotherhood is a red line for both Saudi Arabia and Turkey. It has been a major obstacle to repair relations with Cairo. Although Ankara’s suits frequently talk about compartmentalization of foreign affairs, they have an easier time bargaining about the organization with Tel Aviv than Cairo. Ankara may understand the Israeli dislike of the Muslim Brotherhood, but when it comes to other Muslim majority countries, they cannot tolerate an anti-Brotherhood mindset.

Assuming either Riyadh or Ankara will alter their stand concerning the Muslim Brotherhood is arduous. And the next obstacle to returning to a 2015 level of friendship between the two is how widespread the impact of this tug-of-war has become. The Saudi-led coalition clashes with Turkey and Qatar not only in the Gulf, but also in the Maghreb and Europe. Even the issue of Kashmir is prone to becoming another battleground for rivalry of influence among these two blocs. Ending all these individual areas of conflict would require significant diplomatic rigor, and neither side seems interested.

Ankara is back on its heels with economic challenges. However, it believes that perseverance will pay off in a few years. It is convinced that Saudi Arabia has started to see its alliance with the UAE is more costly now that Iran is likely to gain more power. Ankara believes Saudi Arabia needs its support more now than ever. In its most pragmatic and opportunistic manner, Erdogan is likely to watch Riyadh scale down its antagonism on several fronts before committing to a process of rapprochement.