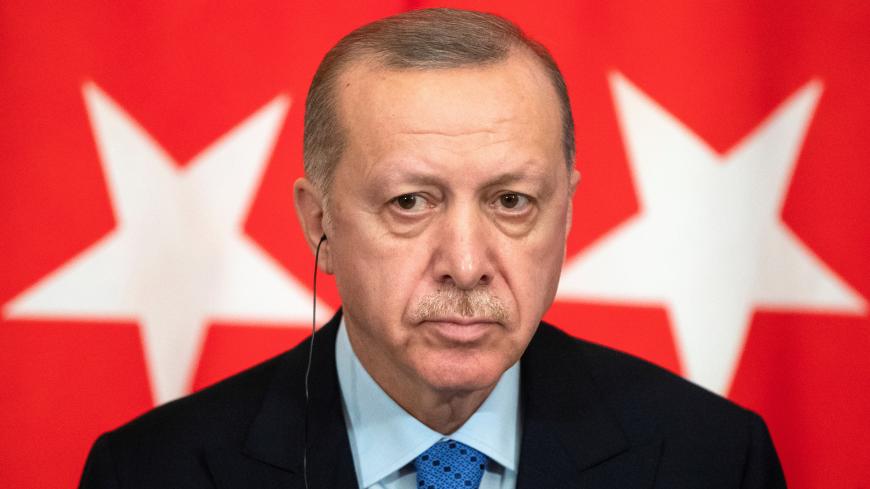 The latest skirmish between Turkey and the United Arab Emirates-Saudi Arabia bloc is over the media. In mid-April, Saudi Arabia announced it was blocking access to Turkish state-funded news agencies and several websites. Within a week, several Saudi and Emirati news outlets became inaccessible in Turkey.

The head of the Turkish-Arabic Media Association, Turan Kislakci, told Al-Monitor, “This was purely a reciprocal move.” Indeed, Turkey had no intention to censor Saudi-backed media outlets. Most of these outlets operate with the blessing and support of the Justice and Development Party (AKP) government.

The latest tit for tat between Ankara and Riyadh is only the visible phase of Saudi Arabia and the UAE's cold war with Turkey since 2013. Tensions between Ankara and Riyadh have been intense, especially since Riyadh chose to ally closely with Abu Dhabi’s anti-Muslim Brotherhood policies in the region. Erdogan’s support for the Muslim Brotherhood is the root of the tensions. Ankara views the Emirati-Saudi bloc as the main culprit behind the coup to topple democratically elected Egyptian President Mohammed Morsi in 2013. Erdogan is also convinced that Emiratis supported the botched coup to topple him in July 2016.

Both sides accuse each other of harboring dissidents. Istanbul became a refugee for exiled members of the Muslim Brotherhood, while Abu Dhabi hosts exiled Palestinian leader Mohammed Dahlan. Dahlan is on Ankara’s most wanted list with a $1.7 million bounty for his alleged role in the 2016 coup attempt against Erdogan. While the Saudi- and UAE-led blockade of Qatar in 2017 forced Turkey to openly side with Doha, this was not Erdogan’s first preference.

Most pro-AKP figures Al-Monitor interviewed downplayed harsh criticism coming from Saudi and UAE sources by portraying them as “paid trolls.” Yet that is not the complete story. For example, Saudi Islamic scholar Aid al-Qarni, who has almost 20 million followers on Twitter, posted a video in late February berating Erdogan. The cleric repeatedly called Erdogan a “bluffer” and not a true Muslim. Qarni's allegations against Erdogan were ignored by much of the Turkish media. And in the handful of outlets that did carry the cleric's video, it was portrayed as a reaction to Turkey’s decision to charge 20 Saudis in the murder of Saudi journalist Jamal Khashoggi, who was slain at the Saudi Consulate in Istanbul in 2018.

When asked about Saudi-Turkish relations, sources among Ankara’s top bureaucrats from the Foreign Ministry and Defense Ministry found ways to place the blame on the UAE rather than Saudi Arabia. They pointed to the growing differences between the two Gulf nations' interests and Emirati aggression against Turkey. Turkey may soon tackle the Emirates directly and more aggressively. The collective tone among Ankara officials was basically, “Our patience with Emirati royals is running low.” This is an indication that Ankara still hopes to mend bridges with Riyadh. But a quick scan of Saudi-owned media outlets in the last week shows several harsh pieces about Erdogan and his family. So the enmity is beyond just a few trolls and is not limited to Emiratis.

On April 30, Turkish Foreign Ministry spokesperson Hamdi Aksoy released a statement asking the UAE to stop its "destructive policies" by fueling civil wars in Libya, Yemen and Somalia. A senior Turkish official told Al-Monitor, "It is an open secret that Emiratis were in Khartoum [Sudan's capital] to recruit fighters for [Turkish-opposed Libyan National Army leader Khalifa] Hifter." As Ankara called on Emirati officials to end their hostile attitude, the prompt reaction from the UAE indicates this is not likely to happen soon.

There also are recent instances where Ankara has targeted Riyadh directly. For example, in late March Interior Minister Suleyman Soylu blamed Saudi Arabia for keeping foreign countries whose citizens make pilgrimage to Saudi Arabia in the dark about COVID-19 cases in the kingdom.

In turn, Saudi Arabia and the UAE, along with Egypt, have long been asking their citizens to boycott Turkish goods and discouraging tourism to Turkey. The two sides also have clashing views on the changing status of Jerusalem. In late January, Erdogan blasted the silence of Arab countries on the controversial US Middle East peace plan. Although the Arab League did denounce Washington's decision to move the US Embassy from Tel Aviv to Jerusalem in 2018.

Overall, Erdogan has been quite calm about Riyadh and Abu Dhabi’s aggressive anti-Turkish policies. There is little to no anti-Saudi rhetoric in Turkey at a time when Erdogan needs an enemy desperately. Birol Baskan, a nonresident scholar at the Middle East Institute, told Al-Monitor that one reason Erdogan prefers not to directly challenge these countries is simply because they are not seen as main rivals such as the United States or EU nations. Erdogan has always been cautious about provoking leaders of other Muslim countries, particularly those who are on good terms with US President Donald Trump.

Kristian Coates Ulrichsen, a fellow for the Middle East at Rice University's Baker Institute, told Al-Monitor, "Turkey and the UAE have ramped up their support for opposing actors and have sought to rally US political opinion to their side," through their lobbying efforts in Washington.

Senior bureaucrats in Ankara told Al-Monitor indicated that in the main, there are two divergent views in Ankara. One sees the UAE and Saudi Arabia as a unified front. The other hopes bridges between Ankara and Riyadh can be mended if the Emirates can be isolated.

In the current state of affairs, Erdogan simply follows a tit-for-tat cold war policy. Financially it has been costly for Turkey because of declining tourism income, exports and investments from Saudi Arabia and the Emirates. However, the COVID-19 pandemic coupled with dwindling oil revenues will hurt the economies of both Gulf countries. Ankara is watching to see whether the oil price collapse leads to declining influence for Abu Dhabi and Riyadh in the United States as well as the Middle East. “Tables will soon turn” is a frequently heard statement in Ankara about the Gulf.