Against a wave of criticism by the Syrian opposition, the National Coalition for Syrian Revolution and Opposition Forces backtracked on its decision to form a national elections commission. 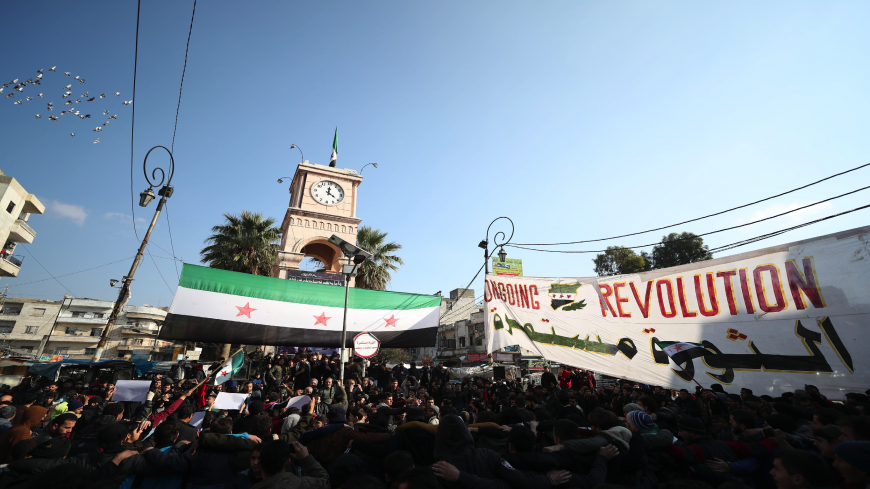 Syrians hold a banner reading in Arabic "The revolution continues" during a protest against the regime of Bashar al-Assad on Jan. 10, 2020, in the northwestern Idlib province. - OMAR HAJ KADOUR/AFP via Getty Images

The National Coalition for Syrian Revolution and Opposition Forces announced Nov. 20 the formation of a national elections commission. In a statement it issued on that day, the opposition coalition explained that the commission will be tasked with preparing for the parliamentary elections during the transitional phase and beyond.

These tasks include, as per the statement, holding a referendum on the draft constitution, raising political awareness for all segments of the Syrian people, promoting the legitimacy of the Syrian opposition and revolution forces, and finding a mechanism that guarantees the broadest participation of Syrians in Syria and abroad in the elections.

The coalition’s decision to form an elections commission stirred controversy. A large segment of the Syrian opposition criticized this step, saying it aimed to legalize the perpetuation of and normalize Bashar al-Assad’s regime.

Against the backdrop of this controversy, the coalition halted the formation of the national elections commission. In a statement it issued Nov. 23, it argued that it is backtracking on its previous decision in order to conduct further consultations with the revolutionary and political forces to reach an appropriate formula.

The coalition reiterated its rejection of any electoral process in which Assad, or any of those involved in war crimes or crimes against humanity in Syria, would participate. The coalition also asserted it will not recognize any electoral scam.

It further added that any electoral process in Syria must take place according to the determinants of political transition based on the Geneva Communique and UN Security Council resolutions 2118 and 2254, and in accordance with United Nations General Assembly Resolution 67/262, which provides for the formation of a “consensus transitional governing body with full executive powers to which all functions of the presidency and Government are transferred.”

In this regard, Yasir al-Farhan, a member of the political body in the opposition coalition, told Al-Monitor, “Iran is establishing its Hezbollah-like formation in Syria. Meanwhile, the Kurdistan Workers Party has its own political formations in Syria, while there are expectations that the regime will still have its cohorts even after the departure of Assad. So the coalition must prepare to confront them all.”

He added, “We discussed the election of a number of coalition members who are either displaced and residing in the liberated areas according to their geographical affiliation. But the decision to form the electoral commission was suspended in response to the demands of a number of revolutionary forces. The suspension decision aims to allow a review of the decision to establish the national elections commission. It reflects the coalition’s respect for different views and its keenness on the unity of the opposition ranks. The coalition affirms its commitment to its stances against any electoral process involving Assad or anyone from his regime who committed crimes against humanity or war crimes.”

Farhan said the coalition will not recognize any upcoming elections in Syria unless they are held in a safe and impartial environment. “This requires a political transition through the formation of a transitional governing body in accordance with the Geneva Communique, UN Security Council resolutions 2118 and 2254, and UN General Assembly Resolution 67/262.”

He added, “These stances are confirmed in the coalition’s legal memoranda sent to all international parties in the UN Security Council and General Assembly, to the UN secretary-general and all governments. They are also announced in its publications and press statements and during official Syrian and international meetings. Delaying the formation of the election commission will allow us to hold adequate consultations with the revolutionary and political forces so that an agreement is reached on the form and the content. We suspended our decision to reach a formula accepted by all.”

Farhan asserted that the coalition is now present on Syrian soil and has the support of about 5 million Syrians who, together with 6.6 million refugees, form a weighty bloc. “The coalition will support the refugees’ participation in electing their representatives, as well as their participation in the referendum on the constitution.”

A leader of the Turkish-backed Free Syrian Army who resides in the northern countryside of Aleppo told Al-Monitor on condition of anonymity, “The opposition believes that the formation of an elections commission is a complete waiver of the demands of the Syrian revolution, most notably ousting Assad and his regime. The opposition quarters rejecting the formation of this commission believe it is tacit approval of the regime staying at the helm and its leader running in the next elections. The electoral commission is a scam that entails more concessions in favor of Assad and his regime. Those opposing this commission argue such a step will definitely serve the regime and will not have any positive impact on the opposition.”

In this context, Wael Olwan, a researcher at Jusoor Center for Studies who lives in Turkey, told Al-Monitor, “The ambiguity in the role and tasks of the elections commission was the main reason for the Syrian opposition’s rejection. The opposition inside Syria, i.e., the military factions, are those who rejected the coalition’s decision the most and described it as an acceptance of Assad’s legitimacy.”

Olwan further noted that the coalition did not take into account the opinions of its other independent partners and platforms, such as the Cairo platform.

“Those opposing the formation of the elections commission claim the coalition is abrogating the role of the Syrian High Negotiations Committee, which has an electoral committee,” Olwan said. “Announcing the formation of the elections commission has dealt the Syrian opposition a heavy blow. This step widened the already existing rift between the ranks of the Syrian opposition, fueled internal divisions inside the coalition itself and weakened the public trust in the political class that claims to represent the opposition street.”