Palestinians seek to launch international campaigns to boycott Emirati companies that deal with products from settlements built on occupied land in the West Bank, accusing them of violating international resolutions that criminalize settlements. 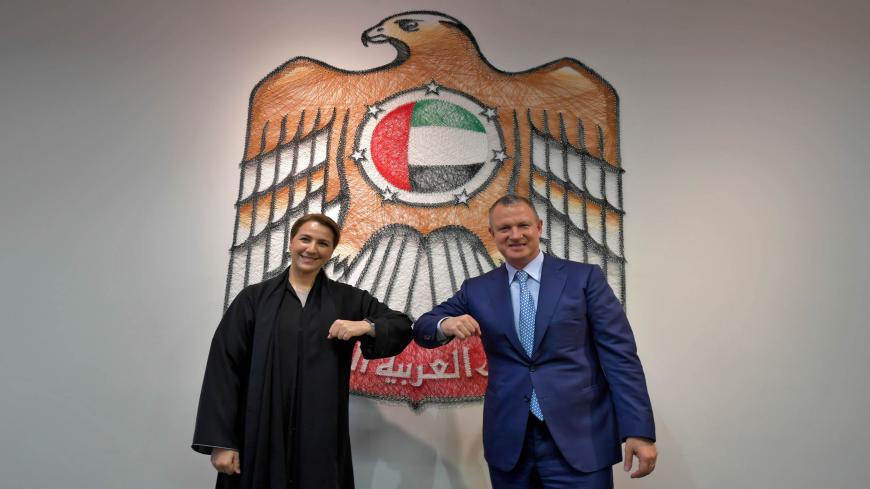 Emirati Minister of State for Food and Water Security Mariam al-Muhairi (L) and Erel Margalit, founder and chairman of Jerusalem Venture Partners, greet each other with an elbow bump at the headquarters of the Government Accelerators in Dubai, United Arab Emirates, Oct. 27, 2020. - Karim Sahib/AFP via Getty Images

On Dec. 7, FAM Holding, a Dubai-based distribution company, signed with Yossi Dagan, head of the Israeli Settlements Council in the West Bank, four trade agreements to import products from the settlements built on Palestinian land. The agreements include the import of wine from the settlement of Itamar, olive oil from Brakha, honey from Hermesh and Tahini from Mount Gerizim.

On his Facebook account, Dagan celebrated the agreements he signed with the UAE. On Dec. 10, he posted video footage of the signing ceremony. In addition, he wrote in another post that the agreements will increase the number of settlers and expand settlements. “We work, consistently and everywhere, to make Samaria an economic power too,” he said.

Since the UAE and Israel signed the normalization agreement in September, the two countries have concluded dozens of trade agreements, most notably for the import of settlement products and their promotion in the Emirates. A similar deal was signed Oct. 28 to import wine from the occupied Syrian Golan Heights.

The Palestinian Authority (PA) has yet to comment or react to these trade agreements. So far, it has been keeping mute about Arab countries, most recently Morocco, joining the normalization wave. This, however, did not prevent Palestinian parties and activists from calling to confront this Arab shift in position.

The secretary-general of the Palestinian National Initiative, Mustafa Barghouti, called for an international campaign to impose sanctions on Emirati companies that deal with Israeli companies, in compliance with United Nations resolutions.

Barghouti told Al-Monitor, “The fact that Arab companies such as FAM Holding are doing business with settlements requires an international boycott campaign. For this purpose, we must reach out to global popular movements and civil society movements, although we are aware of the difficult conditions they are experiencing in the Arab world. We also ought to contact political parties and civil movements, forces and organizations to counter normalization with a popular reaction represented by a boycott of these companies.”

He pointed out that efforts are being exerted between Palestinian civil society organizations, political parties and organizations participating in the campaign to boycott Israel, adding that “practical steps will be taken and a plan developed to activate the boycott process in the coming weeks.”

Palestinians are betting on the success of these boycott campaigns, based on the international position rejecting business activities related to settlement products. The Office of the United Nations High Commissioner for Human Rights (OHCHR) issued Feb. 12, a list of companies having business ties with Israeli companies in settlements in the Golan Heights and the West Bank. OHCHR called for closing these businesses in the settlements, which are in breach of international covenants and human rights conventions. In 2016, the United Nations Security Council and the United Nations General Assembly had issued resolutions classifying settlements as illegal.

Mahmoud Nawajaa, general coordinator of the Palestinian boycott, divestment and sanctions (BDS) National Committee, told Al-Monitor that the BDS movement is keeping a close eye on the Emirati companies that have been doing business with the settlements. “The recent agreements stem from the Emirati political decision to approve the US peace plan,” he said, pointing out that dealing with settlements is a crime just like the crime of normalization.

In January, BDS movement launched an international campaign urging all countries and entities participating in the Dubai Expo 2020 to boycott it due to Israel's participation in it. Dubai Expo, which was scheduled to be held in Dubai in October, was postponed for a year. Nawajaa confirmed the campaign is ongoing and will expand in the coming months.

On its official website, the movement drafted an Arabic-language report against the UAE titled, “How can we contribute to counter and pressure the UAE regime?” The report lists the Emirati companies involved in the normalization agreement, and urges Arabs to boycott the UAE.

He noted that boycott campaigns against the UAE and its businesses dealing with Israeli settlements are in the pipeline. “These campaigns will rely on the results of ongoing research that determines the investments of these businesses and work places in coordination with [civil] groups, federations and unions,” he added.

In addition to boycott campaigns and popular action, Walid Assaf, head of the Colonization and Wall Resistance Commission, hinted at the possibility of prosecuting those who deal with settlement products under international law and through the Human Rights Council.

“We denounce any Arab country importing the blacklisted products from the settlements. We do not want to confer to these products any legality since they are produced on lands stolen from the Palestinians. No one is entitled to carry out business activities related to these products because this violates the decisions of the international community,” Assaf told Al-Monitor.

In regard to the likelyhood of success of the Palestinian popular and legal efforts, he said, “This will depend on the work and efforts made. The business activities with settlements must be countered, because the refusal of settlements is not negotiable.”

According to Assaf, Palestine has yet to lose Arab and international popular support and sympathy. “What is happening in some Gulf countries has nothing to do with the popular position. A popular stance against normalization is [already] taking shape in Bahrain and Sudan [which also signed normalization deals with Israel]," he concluded.