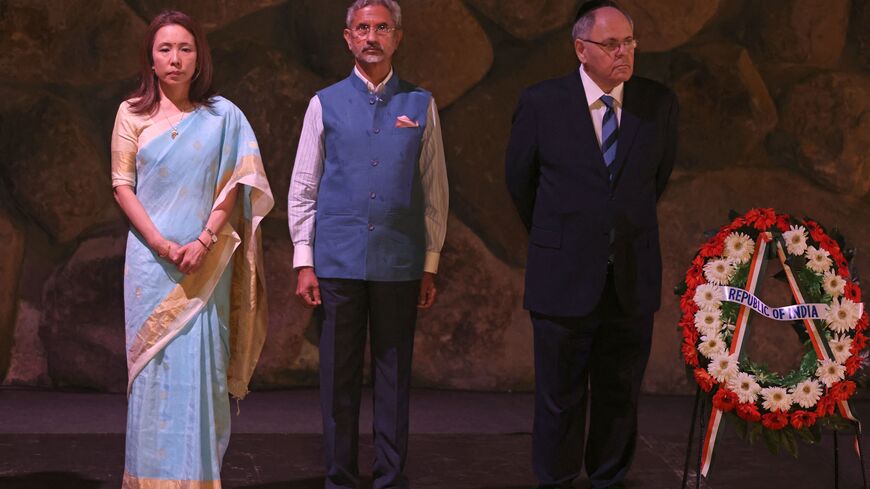 DUBAI, United Arab Emirates — Ever since the signing of the Abraham Accords, Israel, the United Arab Emirates (UAE) and Bahrain have been promoting joint business ventures, but there is more to it. In fact, in recent days, we have been witnessing an acceleration of business cooperation projects and initiatives that include not only these three countries, but also other international partners. And so, the Abraham Accords are both opening for Israel new markets — Gulf states, Central Asia, and so on — and facilitating access to existing markets — India, China and Japan.

Last week, this was demonstrated in practice. Israel, India, the United States and the UAE decided Oct. 18 to form a quadrilateral forum for economic cooperation. This was decided during the visit of Indian Foreign Minister Subrahmanyam Jaishankar to Israel. Participating in the meeting via video were American Foreign Minister Antony Blinken and his UAE counterpart, Sheikh Abdullah bin Zayed Al Nahyan.

At the ministerial meeting, Israeli Foreign Minister Yair Lapid said that the synergy between the countries will help them work together on infrastructure, digital infrastructure, transportation, ports, trains, naval security, etc. In the course of the meeting the four foreign ministers discussed the possibility of a joint infrastructure in the realms of transportation, technology and naval security. The four parties intend to hold another physical meeting in the next few months at the Expo in Dubai.

The foreign minister’s announcement came at the same time as a meeting between Israeli, Indian and Emirati businessmen in Dubai, as part of Bank Hapoalim and the Israel Export Institute's business conference. The first Israeli business delegation arrived to Dubai in December 2020, dubbed “Beyond Business 1.” This year’s delegation, dubbed “Beyond Business 2” came with the clear goal of involving Israel in the enormous commerce between India and the UAE. The participating businesspeople from the three countries announced at the conference that they will start working together to increase the extent of commerce between their nations by using the relative advantages of each country.

Chairman of the Israel Export Institute Adiv Baruch told Israeli press at the event, “Dubai has become a bridge connecting to India and the rest of the countries in the East. Thanks to the Abraham Accords, business opportunities have opened for Israeli industry. These opportunities opened the Israeli economy and the ability to do business in the Gulf states, where there is a large presence of various countries such as India.”

“The signing of the peace accord with the Emirates has brought real hope to all of us for a new and better future, and if we join forces now together — Israel, which is a small country but a technological powerhouse; the United Arab Emirates, which has become a leading center for global commerce; and India, which is one of the leading economies in the world — we could derive the best from each of the three countries and create a new force that would lead us to new and groundbreaking achievements.”

The Chief Economic Adviser of Bank Hapoalim, professor Leonardo Leiderman, told Al-Monitor that today India is the third-largest economy in the world by gross domestic product, corrected by measure of equal purchasing power. In addition, he said, its population of 1.4 billion citizens is the second-largest in the world. This is the size of a market with huge potential for entrepreneurs and investors from Israel. Relations between India and Israel have especially warmed since the visit of Indian Prime Minister Narendra Modi to Israel five years ago to mark 25 years of diplomatic relations between the countries.

There are 3.3 million Indians in the UAE, a third of the population and the largest national group; 60% of directors of Emirati companies are Indian and the giant Indian international corporation TATA operates an enormous business center in Dubai.

The Indian consul general in Dubai, Aman Puri, told Al-Monitor that Israel’s global status in the realm of elite technology and its human capital — combined with the Emirates being a center of global business with great wealth to invest, and with the manufacturing capabilities of India and its giant market — “are a winning recipe and we have to know how to use it.” The Israeli consul general in Dubai, Ilan Sztulman, told Al-Monitor that a delegation of Indian businesspeople and business owners who work in the Emirates will arrive next month to Israel to promote trilateral business. According to him, this meeting between the three nations creates many opportunities, among other things by way of free enterprise zones, Dubai’s giant ports and its business connections, and the advantages of the huge Indian economy.

Another event that took place Oct. 20 in Dubai was a conference with the participation of 30 Japanese companies active in the Emirates with Israeli businessmen. The conference was organized by Attorney Zeev Weiss of the firm Weiss Porat, who also serves as the chairman of the Israel-Japan Friendship Society and Chamber of Commerce. The emphasis of the meeting was on the discussion of how to use the triangle of the Emirates-Japan-Israel for cooperation that would leverage the capacities of each one of the sides. Weiss said that the warmth and enthusiasm that the Emiratis show regarding cooperation with Israel could help in future deals where each side brings its relative advantages, such as funding, connections and technology. The Abraham Accords gave Israel real prestige in the eyes of the Japanese, who are very active in the Emirates.

Another interesting point raised in conversation with Israeli businesspeople who came to Dubai are the deals they say could soon be signed with Saudi companies by means of go-betweens in the UAE and Bahrain, even before diplomatic agreements between Jerusalem and Riyadh have come to pass. Economic peace.