Israel’s Bennett hopes to outdo Netanyahu in relations with India

Stepping into the shoes of Benjamin Netanyahu, Prime Minister Naftali Bennett makes efforts at strengthening the bilateral economic ties and the security alliance Israel has forged with India. 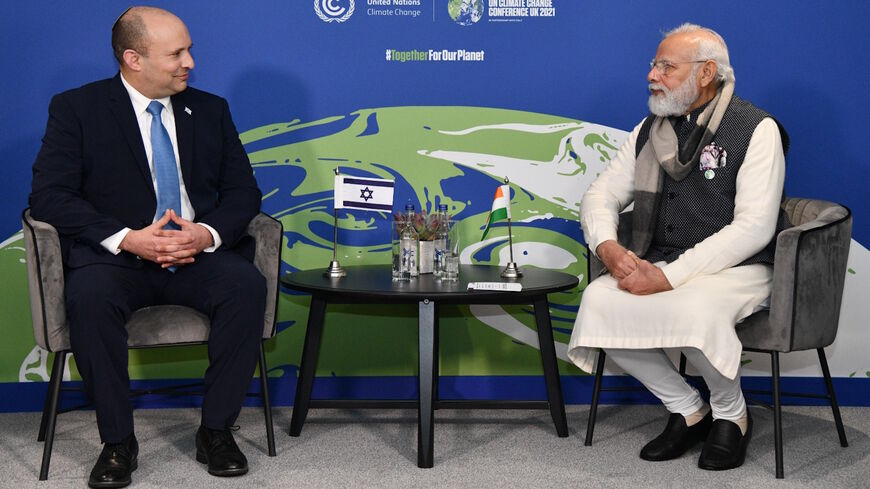 As Prime Minister Naftali Bennett tries to fill the enormous shoes of his predecessor, he will be measured against Benjamin Netanyahu's major foreign accomplishments. On the diplomatic front, the ex-prime minister negotiated and signed the Abraham Accords with four Muslim states. On the economic side, he improved economic relations with numerous countries and markets, raising Israel’s ranking among the developed nations by every economic metric.

In particular, Israel's trade grew significantly over the last few years with India. This can be attributed to the cordial relations between Netanyahu and Indian Prime Minister Narendra Modi, who was elected in 2014. When Modi visited Israel in 2017, he and Netanyahu were photographed together walking barefoot on the beach. More importantly, they reached multiple agreements between their two countries, many of which were signed formally the following year, when Netanyahu visited India — including the revival of a $500 million deal to sell Israeli missiles to India.

At first, Bennett left foreign policy to his partner and colleague Yair Lapid, who serves as foreign minister and alternate prime minister. Lapid first visited the United Arab Emirates, Bahrain, Morocco, and, most importantly, the United States, before Bennett’s Aug. 27 state visit there.

Bennett's first priorities were dealing with the coronavirus crisis and passing the budget. In the last few months, however, Bennett has increased his involvement in foreign affairs, as evidenced by his meeting with President Joe Biden, his address to the United Nations’ General Assembly in New York, and his meeting with Russian President Vladimir Putin in Russia, which lasted much longer than anticipated. In fact, Putin made it a personal mission to assist Bennett and his entourage, when they were forced, as a result, to remain in Sochi over the Sabbath.

The COP 26 Climate Conference in Glasgow was an excellent opportunity for Bennett to rub shoulders with other world leaders, including Narendra Modi. Preliminary reports from the Prime Minister’s Office focused on their kind words for each other, illustrated with photos of the two men embracing. The official report says that Bennett thanked Modi for restarting relations between India and Israel, and said, “This is a deep relationship between two unique cultures, Indian and Jewish culture. I know it comes from your heart. It is not about interests, but a deep faith that you hold, and we feel it.”

Before this meeting, Indian Foreign Minister Subrahmanyam Jaishankar visited Israel last month and invited Bennett to make an official visit to India. It was reported that the two men “discussed strengthening the strategic alliance, expanding bilateral ties and deepening the warm friendship between Israel and India.”

Jaishankar also met with his Israeli colleague Lapid, and the two men decided on negotiations to create a free trade zone between the countries. The goal is now to have an agreement ready to sign by mid-2022. The two ministers also agreed that their countries would recognize each other’s vaccination documents and expand cooperation in both water and agriculture.

At this Oct. 19 meeting, Lapid noted that the synergy between the countries would help them work together on infrastructure, including digital infrastructure, transportation, ports, trains, naval security, and more. They also discussed meeting in person at the Dubai Expo in the next few months.

The announcement from the Foreign Ministry coincided with a meeting between entrepreneurs from Israel, India, and the UAE in Dubai. The participants announced that they would work together to expand the scope of trade among the three countries, while taking advantage of the relative advantages of each country. The goal is to integrate Israel into the enormous trade network between India and the UAE.

In 2022, Israel and India will mark their 30th anniversary of diplomatic relations. Before that, India was a leader of the Non-Aligned Movement, which took an anti-Israel position throughout the 1950s and 1960s. This all changed in the 1980s and 1990s, once the communist bloc collapsed. India now regards Israel as an important ally in the war against Islamist terrorism. This was evident in the 2008 Mumbai attack, which also targeted Jewish and Israeli institutions.

At present, the security relationship involves the sharing of intelligence and the extensive sale of military equipment. Only Russia sells more arms to India. In fact, Israeli arms sales to India exceed those of the United States.

Bennett now wants to strengthen ties with the biggest democracy in the world. This will include a state visit to India to mark the anniversary of the establishment of relations in January or February 2022.