Israel and the United Arab Emirates already established a large scope of bilateral trade, but officials and businesspeople on both sides are persuaded that this is only the beginning. 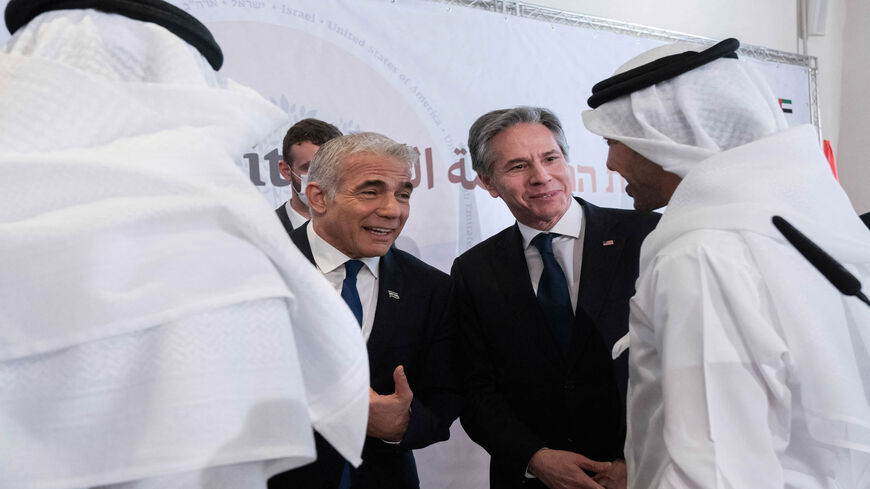 The free trade agreement signed May 31 in Dubai between the United Arab Emirates (UAE) and Israel reflects the importance both countries accord to the economic ties and the diplomatic relations between them. Israel’s Economy and Industry Minister Orna Barbivai and Emirati Minister of Economy Abdulla bin Touq al Marri officialized the agreement, which is expected, according to estimates of the Israeli Ministry of the Economy, to considerably increase the already impressive trade between the two nations in goods and services.

Ohad Cohen, director of the Foreign Trade Administration at the Israeli Ministry of the Economy, told Al-Monitor that the agreement is expected to triple the scope of trade between the countries to $3 billion within three years.

The agreement grants immediate or gradual tax exemption on most trade between the countries. It also covers issues of regulation and standardization, customs, cooperation, government acquisition, electronic trade and intellectual property rights.

Barbivai said at the ceremony, “This is a visit of strategic importance for economic relations between the State of Israel and the UAE — the first free trade zone agreement with an Arab state. The free trade zone agreement that we signed this morning is expected to strengthen bilateral trade, to break down obstacles and to advance new economic opportunities and partnerships, that will serve as a basis for our shared path.”

Marri said, “The trade agreement with Israel will create a new paradigm for the region. This agreement will accelerate economic growth and strengthen the common belief that the only way to build durable and sustainable economies in the complex world is together. This agreement represents something larger than business: the importance of building significant partnerships.”

The Abraham Accords, signed by former Israeli Prime Minister Benjamin Netanyahu, the foreign ministers of the UAE and Bahrain, and then-US President Donald Trump, have led to thriving commerce between these countries. In November 2021, negotiations began for a free trade agreement between the sides, which were concluded on April 1.

The UAE is the second-largest economy in the Arab world — after Saudi Arabia — and its import market stands at hundreds of billions of dollars, much of consists of technology products and advanced solutions, where Israel has a relative advantage.

Israeli officials explain that once the free trade agreement comes into force, it will lead to a reduction in customs on most products, imported and exported, alongside an improvement and relief in trade.

Going into details, the agreement includes total cancellation or significant reduction of customs on 96% of products imported from Israel to the UAE, including chemicals, fertilizers, cosmetics, plastics, ceramics, jewelry and diamonds, machines and electronic parts and medical equipment, as well as produce, juice, seeds, meat and fish, and more.

At the same time, customs will be canceled or significantly reduced for 96% of products exported from the Emirates, including medicine, plastic and rubber products, ceramics, machines and electronic parts, conducting cables, jewelry, vehicles, as well as meat products.

Another clause in the agreement addresses the protection of intellectual property rights, patents and copyright.

The sides agreed to advance cooperation, including identifying ways to help small and mid-size businesses to take advantage of commercial opportunities provided by the agreement. Further, the agreement calls to establish a shared committee to hold constant dialogue between the sides on economic issues and provide a platform to discuss barriers to commerce and requests from industry.

These details are important to merchants and businesspeople, but at its crux is deepening and supporting the strategic ties created by means of the Abraham Accords between Israel and the Emirates, and with it, all of the Persian Gulf. Another sign of this is the March 15 decision of the Emirates to commence daily services to Tel Aviv from June 23, enlarging even further the open gates between the two nations.