The United Arab Emirates signed a deal with Israel to buy wine produced in the settlements of the occupied Golan Heights, prompting a wave of anger among Palestinians and the boycott, divestment and sanctions movement. 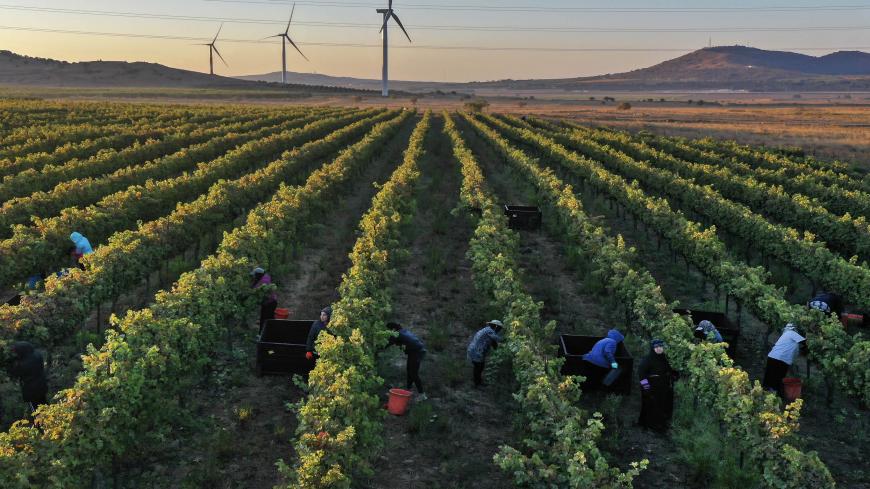 Israeli farm workers harvest Cabernet Sauvignon grapes for Bazelet HaGolan Winery, beneath wind turbines constructed between vineyards and fruit orchards as part of a wind farm, near El Rom settlement in the Israeli-annexed Golan Heights at the border with Syria, Oct. 5, 2020. - MENAHEM KAHANA/AFP via Getty Images

RAMALLAH, West Bank — The United Arab Emirates (UAE) has dealt a heavy blow to the boycott, divestment and sanctions (BDS) movement, after it signed a deal Oct. 28 with Israel to sell wine from Syria’s occupied Golan Heights in Dubai. The deal was concluded between the Emirati African + Eastern company that operates in the field of wine and alcohol marketing and the Israeli-owned Golan Heights Winery. The products will be launched in wine stores, hotels and restaurants in Dubai in the next few days.

The Golan Heights Winery was established in 1983, and it was the first of its kind in the Golan Heights after its occupation by Israel in 1967. It relies on the production of eight settlements and agricultural village cooperatives and produces four different types of wine, according to the website of the winery.

The Golan Heights Winery uses 6,300 dunams (1,550 acres) of lands of the occupied territories planted with 20 types of different grapes. Israel forcibly displaced the owners of these lands when it occupied them in 1967, and only 9,000 Syrians, mostly Druzes, remain in the area and inhabit five small villages — Buq'ata, Majdal Shams, Mas'ade, Ain Qenia and Ghajar.

This recent deal constitutes one of the global challenges facing the BDS movement, whose influence is growing by boycotting the products of the settlements built on land occupied in the 1967 war.

Mahmoud Nawajaa, general coordinator of the BDS movement in Palestine, told Al-Monitor, “Through its agreements with Israel, the UAE has gone beyond normalization and is now implicated in the Israeli apartheid system. It has become a partner in that system against Palestinians.”

Nawajaa said that the deal to sell settlement products indicates that the UAE is singing out of tune when it comes to international law, due to its clear violation of the blacklist published by the United Nations Human Rights Council (OHCHR) of companies operating in the West Bank and Golan settlements.

Nawajaa pointed out that the recent normalization agreements and the subsequent economic cooperation deals have created new challenges for the BDS movement, especially since the UAE prohibits any popular, civil society or opposition activity and suppresses any voices disagreeing with the regime.

He indicated that action starts with the people who reject normalization and relations with Israel, adding that the boycott campaign has already started with campaigns against Emirati companies and banks involved in cooperation deals with Israel. Another campaign will be activated in the coming weeks against the UAE’s organization of Expo 2021 over Israel’s participation.

Nawajaa said, “The UAE, like any country that has companies and relations with Israel, is hurting us, and therefore it is among the targets of the boycott campaign, especially since the UAE regime has voluntarily become a partner in crimes against Palestinians, and it has paved the way for other countries to normalize [relations with Israel].”

Nawajaa clarified that campaigns against the UAE will be organized to influence its relations with some Arab, Islamic and European countries that reject normalization and intend to boycott Expo 21.

The BDS movement underlined in a statement Aug. 15 that it will target and call for boycotting any Emirati, Arab or international company colluding to implement the Emirati-Israeli normalization agreement.

As Israel and the UAE signed the wine deal, US Ambassador to Israel David Friedman signed an agreement with Israeli Prime Minister Benjamin Netanyahu at Ariel University, which lies on Palestinian lands in the Salfit governorate of the West Bank. The agreement aims at expanding the implementation of the scientific collaboration agreement between Israel and the United States to include the West Bank and Golan Heights settlements.

This timing reveals that the United States and the UAE, and potentially other Arab countries that have signed normalization agreements with Israel, will provide Israel — which has been under intense criticism regarding settlements specifically from European countries — with a safety net.

The European Court of Justice ruled Nov. 12, 2019, that the European Union must label products made in Israeli settlements built on occupied territories in 1967 — in the West Bank, East Jerusalem and the Golan Heights.

Walid Assaf, head of the Colonization and Wall Resistance Commission, told Al-Monitor that the deal to buy products from the settlements of the occupied Golan Heights may pave the way for promoting other products from the West Bank settlements that are currently subject to international boycott. He said that this boycott inflicted huge losses on Israeli companies, thus prompting them to establish branches in Tel Aviv to put Israel’s name on the certificate of origin for the product, rather than the name of the settlement, to deceive shoppers in Europe.

Assaf pointed out that the Golan Heights are occupied Arab territory and buying products made in the settlements built on them is a violation of international law and a contribution to supporting the Israeli occupation and settlement building. He added that this deal affects the BDS movement and contributes to financing the war that is being waged against the Palestinians.

Nizar Ayoub, director of Al-Marsad - Arab Human Rights Center in Golan Heights, told Al-Monitor, “The wine to be exported from the Golan Heights is produced in illegal settlements established on the ruins of devastated Arab villages whose people were forcibly displaced.”

He said that Israel exploits the Golan Heights for agriculture, as it has established 34 settlements on the lands of 130 small villages and ruins since occupying the area, and controls 95% of the land area, which it has devoted to settlement projects.

Ayoub noted that the production sector of settlements built in the Golan Heights is enormous and supports the settlements’ economy and contributes to their expansion. Tourism also constitutes a great financial resource due to millions of visitors that flock to it.

He added that more than 200 Israeli companies operate in the Golan Heights settlements, and that Israel is preparing plans for huge projects in the area to house 250,000 settlers by 2040 and build two cities, each containing 30,000 settlement units. The future of the Golan Heights as an occupied territory is yet to be seen for the coming decades, he concluded.