Pro-Palestinian activists are working with a consumer advocacy group to urge Palestinian investors to back out of a new shopping mall in northern Jerusalem, warning that not only will the project harm the Palestinian economy, the investors themselves could face legal action. 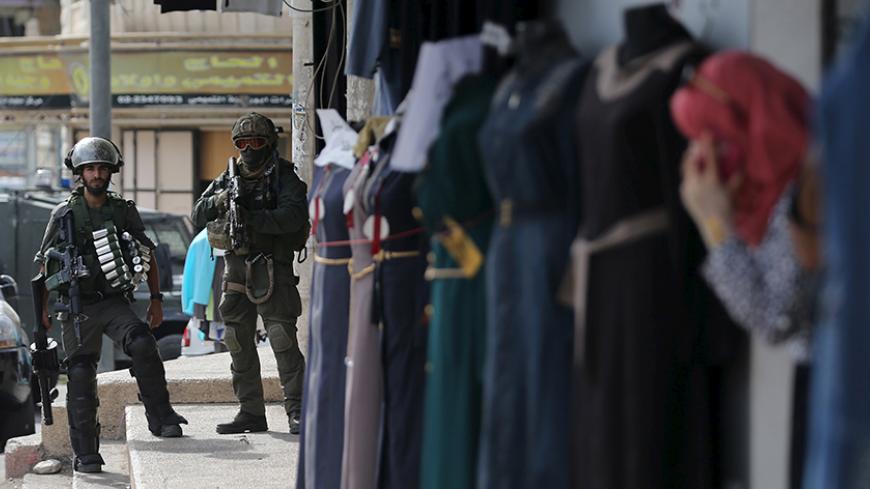 Israeli border policemen take position as a Palestinian woman looks out a shop during clashes in the West Bank town of al-Ram, near Jerusalem, Oct. 22, 2015. - REUTERS/Mohamad Torokman

RAMALLAH, West Bank — In June, the National Committee for Boycott, Divestment and Sanctions against Israel, known as the BDS movement, and the Palestinian Consumer Protection Society managed to convince a major Palestinian company to withdraw from a partnership with Israeli businessman Rami Levy to build a shopping mall in al-Ram in northern Jerusalem, over an area of approximately 20 dunams (20,000 square meters) and with a total cost of 200 million shekels ($52 million).

According to an article published by the Israeli website Walla Jan. 15, Levy had announced his plan to build a shopping mall — which is currently under construction — to promote Israeli-Palestinian coexistence in Jerusalem by attracting Palestinian businessmen to buy or lease shops in the mall, Palestinian customers and Israelis living in nearby settlements. Levy’s plan sparked an angry reaction from many Palestinians.

The mall is being built in the Qalandiya industrial area, Atarot, which lies north of Jerusalem, just meters from Faisal al-Husseini International Stadium, the home of the Palestinian national football team. This area is classified as Area C and the industrial zone is considered a settlement area. Palestinians living in Jerusalem as well as residents of Ramallah and the surrounding villages are allowed access to this area, as the mall is located at its entrance.

The general coordinator of the BDS movement, Mahmoud Nawajaa, told Al-Monitor that the movement is ready to launch an open campaign against the Palestinian parties that plan to team up with Levy.

Haniya revealed that a large Palestinian company he did not name was planning to invest in Levy’s mall but was dissuaded after negotiations with the Palestinian Consumer Protection Society.

“Now there are five other smaller Palestinian investors whose names we don’t want to disclose hoping to open shops, supermarkets and bakeries at the new mall,” Haniya said. “We have the names of some Palestinian merchants who wish to open shops at the mall, but we are trying to persuade them not to do so. We explained to them that the new mall would harm the national economy in Jerusalem and promote economic normalization and coexistence and that such a move is illegal, as the new mall is being built in an Israeli settlement.”

​These investors could face legal action. Palestinian President Mahmoud Abbas' Law No. 4 of 2010 banned “all goods and services that are partially or completely produced in Israeli settlements." These goods were defined as "all industrial, agricultural, food and processed products partially or completely manufactured, stored or packed in the settlements. Any technical, artisanal or financial activity performed in the settlements that could benefit them in return for money. Any commercial, promotional, marketing, storing, transportation, packing or labeling activity with the purpose of importing settlement goods into the Palestinian market, thus being of benefit and service to the settlements and their goods.”

The spokesman for the Palestinian Ministry of Economy, Azmi Abdul-Rahman, told Al-Monitor, “We don’t have a list of these investors’ names, nor are we in contact with them. But the law against trading in settlement goods and the stipulated penalties are clear. These investors will be dealt with according to the law.”

Haniya explained, “The law is not always applied to those involved in trade and importation with settlements. … This is why the law should be implemented in order to strengthen our position in boycotting settlement goods and in negotiating with investors to dissuade them from working with Levy.”

Palestinians fear Israeli attempts to promote economic peace through joint projects. Khaled Mansour, a member of the political bureau of the Palestinian People’s Party, told Al-Monitor, “Israelis are trying to promote economic cooperation and implement joint projects, which is unacceptable as it overshadows our people’s right to self-determination and the establishment of an independent state.”

“Unfortunately, some Palestinian traders are going public about their business with Levy and the settlements. This is why I believe that the Palestinian Authority should start enforcing the law against trading with settlements, criminalizing such partnerships. Economic cooperation would benefit the settlements and encourage settlers to carry on with their crimes, while the Palestinian people are forced to compromise and coexist with settlers, despite all the local and international boycott campaigns,” Mansour added.

For his part, Nawajaa said, “The new mall is an example of public economic normalization using Palestinians to cover up the crimes committed by settlers and give the world a false image of coexistence. All of this is part of the fight against the boycott campaign.”

He warned, “If Palestinian companies carry on with this partnership, we are ready to launch public campaigns against them, because such partnerships promote the occupation rather than end it. These projects hinder the BDS movement’s international efforts to isolate Israel abroad because Palestinians are the ones failing to comply.”

Levy’s stores in the West Bank have been the targets of many protests. In 2010, a large group of popular resistance and international activists stormed one of Levy’s stores near Geva Binyamin settlement — established on land belonging to the village of Jaba in Ramallah — and raised Palestinian flags and banners calling for boycotting settlement goods.