While international efforts increase against Israeli settlement goods, many Palestinians in the West Bank are failing to heed the boycott call. 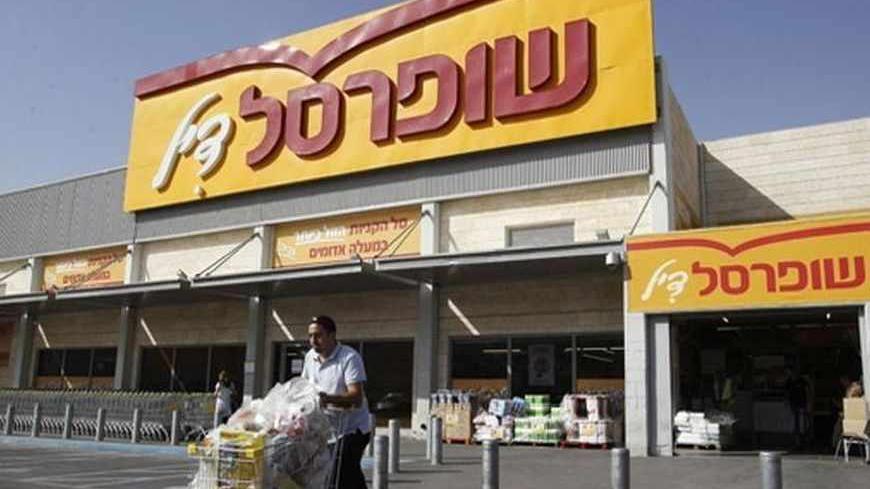 A man pushes a shopping cart outside a Super-Sol supermarket in the West Bank Jewish settlement of Mishor Adumim near Jerusalem, May 5, 2013. - REUTERS/Ammar Awad

On July 23, a Palestinian court ordered the release of products that customs officers had confiscated as they made their way from the Israeli Burkan settlement toward the West Bank city of Salfit, a Palestinian official informed Al-Monitor.

The judge’s decision left the customs officials in a state of shock and anger, but a court order must be obeyed and they were thus compelled to return goods worth tens of thousands of shekels to their Palestinian owner. One customs officer later sarcastically said to Al-Monitor, “That’s justice for you!”

The Palestinian government launched in June 2010 successive campaigns to combat the importation of goods coming from Israeli settlements built on Palestinian lands occupied in 1967. The campaigns began with a symbolic poster being affixed to the home of President Mahmoud Abbas, and later to homes of thousands of Palestinians, that read “This house does not contain settlement products.” As a result of these efforts, customs officers seized — on a daily basis — goods smuggled from Israeli settlements to the tune of millions of shekels per year.

The European Union’s decision on July 17 to ban cooperation with or funding of Israeli settlements built on occupied Palestinian lands — including east Jerusalem — and prohibit the financing of any settlement related faction or institution was the culmination of years of Palestinian diplomatic efforts in EU countries, as a former official of the Palestinian Embassy in Brussels, Majed Bamiah, told Al-Monitor in an interview on July 22.

But the latest European decision inflamed an internal debate among Palestinians as to whether their governmental and popular efforts had succeeded in combatting the importation of settlement goods or not. A debate that revolves around millions of shekels worth of products and involves skepticism concerning the political will needed to enforce the law banning settlement products and the subsidization of local goods. This debate also involves, most importantly, the Palestinian population’s desire to implement such measures and combat settlement activities.

Under the slogan “We want the occupation to pay,” the first popular campaign to ban and combat the importation of Israeli goods was started in 2008 by the activist and director of Agricultural Relief in the Nablus province, Khalid Mansour, during Israel’s war against the Gaza Strip.

The campaign targeted all Israeli products without exception, and was, at the time, met with acceptance engendered by Israel’s war against the Gaza Strip. It was followed in June 2010 by a decision taken by Salam Fayyad’s government to launch an official campaign meant to boycott and ban only settlement products, because the Paris Economic Agreement of 1994 stipulated that both sides cooperate economically.

The official campaigns that targeted ordinary citizens and merchants proved their seriousness and came bolstered by a decree issued in 2010 by Abbas, who can issue laws in exceptional cases of extreme necessity as a result of the Legislative Council’s inability to convene since the elections of 2006.

The penalties stipulated by the Law to Prohibit and Combat Settlement Products served as an effective deterrent, because all those who participated in or contributed to the trade or import of goods or services from the settlements were subject to a prison term of two to five years and a fine of no less than 10,000 Jordanian dinars [$14,100]. The same law proclaimed the establishment of the National Dignity Fund to combat settlement products.

Since 2010, enforcing the law resulted in the confiscation and destruction of smuggled goods worth over 60 million shekels [$16.8 million], an official source told Al-Monitor on the condition of anonymity. Products costing an equal amount were not destroyed because of a lack of the proper equipment to do so on the Palestinian side.

Speaking to Al-Monitor on July 21, the director-general of Consumer Protection at the Ministry of National Economy, Omar Kobha, said 90% of confiscated goods were seized by customs services at the main entrances to cities, while those involved in smuggling them were referred to the courts. The director-general of the Customs Authority, Ghaleb Diwan, pointed out to Al-Monitor on July 21 that “817 tons were seized during the period extending from June 2010 until June of this year, and 185 cases were referred to the Public Prosecutor’s Economic Crimes Office.”

But, it seems that the law was not deterrent enough, leading to 72 tons of goods being seized, according to the official, since the beginning of this year — with 15 cases being referred to the Economic Crimes Office. This means that there still is public and commercial appetite for settlement products.

In describing the situation, Mansour told Al-Monitor on July 22 that official enforcement of the ban against settlement products was seasonal, which explained why Palestinian markets are flooded with agriculture products from the settlements — such as grapes and dates, among others.

Mansour and other sources from within the Customs Authority all agree that there is an important lapse in the enforcement of the settlement boycott law by Palestinian courts.

Sources from the Palestinian Judicial Media Center confirmed to Al-Monitor  that only nine people were convicted of crimes relating to the anti-settlement goods law since 2010. They were sentenced to three months in jail and paid fines as high as 2,000 Jordanian dinars [$2,800].

Those monitoring the official efforts talked about important lapses that needed to be filled, most important of which is the government’s exclusion from the campaign of industrial settlement areas such as Atarot — built on Kalandia lands south of Ramallah — under the pretext of their being home to Palestinian investments.

Mansour pointed out, “The government did not boycott the most popular of Israeli goods in Palestinian markets, namely the Tenuvah dairy products, because the enterprise’s factory was located in Tel Aviv.” He condescendingly added, “Tenuvah’s cow farms are located in southern Hebron and the Al-Aghwar areas of Palestinian lands occupied by Israel in 1967!”

Settlements also found a way to circumvent the Palestinian law by repackaging their products inside Israel proper and openly transporting them via the Palestinian Authority’s (PA) official border crossings as Israeli and not settlement products.

The primary shortcoming faced by the PA and Fayyad’s government emanated from their call on Palestinians to stop working inside the [Israeli] settlements, futilely promising to provide them with alternatives.

In this regard, Mansour said, “Despite the millions of dollars given to the PA by donor countries, it failed to provide a source of income to approximately 40,000 Palestinians who gained their livelihoods by working in the settlements.”

Working in the settlements goes against the national project to build a Palestinian contiguous state. But this is not the only contradiction faced by Palestinians, for the Palestinian people’s appetite for settlement goods and — even worse — their going to the settlements to shop, both embody the height of illogicalities.

Each month, hundreds of Palestinians visit the shopping centers owned by Israeli businessman Rami Levy in the settlements of Kfar Etzion in Hebron and Ma’alie Mikhmas near Ramallah, in search of the cheapest prices and offers.

Mother of five, Dalal al-Kuwaiti, told Al-Monitor in Ramallah, “The first time I went to shop from Rami Levy four years ago, it felt strange for me to be in an Israeli settlement mingling with settlers, but I got used to it.”

Kuwaiti shops at Rami Levy twice a month, spending 1,000 shekels [$280], or one-third of her husband’s salary, who is a PA employee. “I would need at least twice that amount if I were to shop at the local Palestinian market. There are always offers and sales on food items, which is unheard of in local markets.”

Despite the National Dignity Fund publishing censored photographs of car license plates and Palestinian shopper’s faces to deter them from shopping at Rami Levy, they continued to do so.

Mansour and Kobha summarized the problem as a lack of awareness about the danger posed by settlements. In addition to the absence of government support for local products are factors that all serve the interests of goods produced in Israeli settlements in the West Bank.

That is why Israel viewed the EU’s decision as provocative, despite the Palestinian Ministry of National Economy's Undersecretary Abdul Hafiz Nofal’s description of the decision as being “late, but on the right track” — which led Israeli media to come up with grandiose headlines that the EU’s decision would harm common Palestinian-Israeli interests.

Not applying the law firmly toward ongoing smuggling operations of settlement goods — as well as the local Palestinian appetite for these goods — shows that there is a lot the PA must do internally to ensure the success of its decision to boycott settlement goods and any European effort in this regard.