No relief in sight for Mideast hotspots after catastrophic 2020 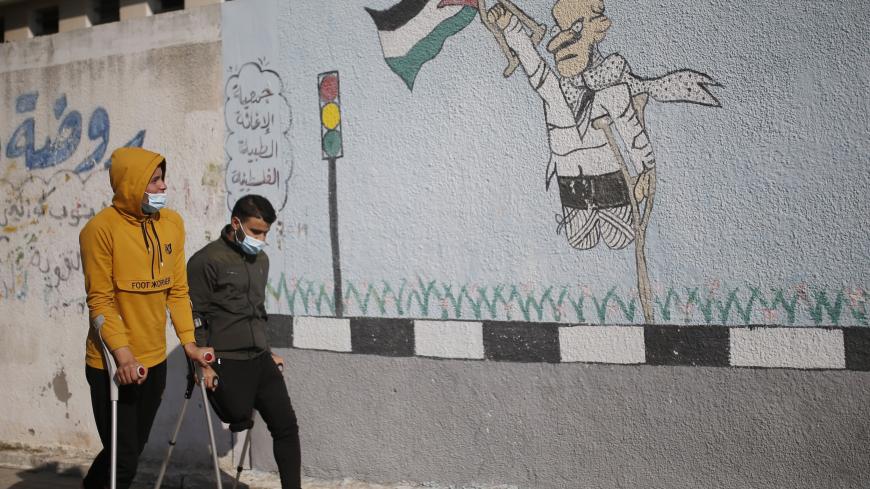 Two Palestinian youths on crutches wearing a protective mask due to the COVID-19 pandemic, walk past graffiti depicting a disabled man carrying a national flag, during an event marking the International Day of Persons with Disabilities in Gaza City on Dec. 3, 2020. - MOHAMMED ABED/AFP via Getty Images

The COVID-19 pandemic has compounded the already incalculable costs of conflict, disease and failing states in parts of the Middle East. Even when a vaccine finally arrives for people in these areas, which will likely be much later than other parts of the region and the globe, the layered effects of disease on top of crisis may be irreparable.

A flurry of recent reports and Al-Monitor articles document the challenges ahead in some of the most difficult parts of the Middle East — Gaza, Yemen, Syria — in language that is about stark and alarming as one can imagine.

UN Secretary-General Antonio Guterres this week expressed "a deep sense of worry about the grim realities" faced by Palestinians, especially in Gaza.

A recent UN Conference on Trade and Development (UNCTAD) report warns that Gaza’s economy is "near collapse," as we report here,

A surge in COVID-19 has already outpaced the limited capacity of Gaza’s health sector. Hana Salah reports, "The deteriorating health-care system in the Gaza Strip warns of a health disaster due to the increasing number of coronavirus cases, as 32% of daily tests turn out positive," adding, "Since March, 21,461 cases have been registered in Gaza, with 9,627 active cases as of Dec. 2, and about 111 deaths."

The World Bank, like Guterres, assessed the overall outlook for the Palestinian territories as "grim." The economy of the West Bank and Gaza is expected to contract by 8% this year (even more in Gaza), with unemployment expected to jump to 27.8% (with 48.5% of the Gaza labor force out of work in the third quarter) and those living in poverty to rise to 27.5%, an increase of 5.5% over the last 4 years.

“The COVID-19 crisis has further compounded financial sector risks,” the World Bank reports, “driving stability concerns to new highs especially given the rise in direct and indirect exposure of the banking system to the PA [Palestinian Authority], and the deteriorating quality of credit portfolios for key economic segments.”

Women and girls in Gaza, despite COVID-19 and the already dire economic conditions, are fighting back, literally, including taking up boxing. Despite criticism from some men that boxing is not a sport for girls, and pandemic restrictions on training, Ruwaida Amer reports that the Gaza girls team is looking to compete in the Arab Junior Boxing Championship in Kuwait in February.

Some good news came this week in the form of $1 billion in tax revenues transferred by Israel to the PA, six months after the PA cut off coordination with Israel to protest Israel’s planned annexation of the West Bank, as we report here. Israel held off on annexation as part a condition of the Abraham Accords, the decision to normalize ties with the United Arab Emirates.

Although the transfer will help, the World Bank reports "a large financing gap (deficit after expected grants) of US$760 million is projected for 2020 and additional efforts by the Palestinian Authority, the donor community and Israel remain crucial to secure additional financing."

UNCTAD recommends that putting Gaza back on a course to "sustainable development" requires lifting "restrictions on access and movement with the West Bank and the rest of the world," as well as development of seaports and airports, water and electricity projects, and offshore oil and natural gas resources.

Yemen faces “catastrophic food insecurity,” including the further expansion of widespread famine, according to a report by the Food and Agriculture Organization, the World Food Program and the UN children’s agency UNICEF, as we report here.

Yemen, according to the UN, remains the world’s worst humanitarian crisis. UNICEF Executive Director Henrietta Fore has labeled it "an imminent catastrophe" and an "emergency within an emergency."

The UN’s Office for the Coordination of Humanitarian Affairs reported this week that "more than 230,000 Yemenis have died due to the war, the majority — some 131,000 — through indirect causes such as lack of food, health services and infrastructure. Over 3,000 children have been killed, and 1,500 civilian casualties have been reported in the first nine months of this year."

Sanitation and clean water are scarce, and only about half of health facilities are functioning. Those that are often lack the necessary equipment to deal with COVID-19 and the many other diseases. Children are paying a disproportionately terrible price as a result of five years of war, disease, economic collapse, and decaying infrastructure. "A staggering 80% of the country’s population — over 24 million people — require some form of humanitarian assistance and protection, including more than 12 million children," the UN reports.

Fore said, "Nearly 325,000 children under the age of five suffer from severe acute malnutrition" and "more than five million children face a heightened threat of cholera and acute watery diarrhea" — in addition to the increasing threat from COVID-19.

A UN expert panel on Yemen this week called out the warring parties for effectively starving civilians. The panel called for an end to “surreal and absurd” human rights violations taking place in the Yemen war, and which continue unchecked, and represent potential war crimes.

Syrians face a growing crisis of food insecurity ahead of an "incredibly hard winter," according to Ramesh Rajasingham, the acting UN assistant secretary-general for humanitarian affairs.

There are an estimated 6.7 million internally displaced Syrians (out of an estimated population of 17 million). About a third lack proper shelter, and live in either damaged buildings, schools or tents, Rajasingham said.

"An estimated 9.3 million people in Syria are food insecure — that’s 1.4 million more people than a year ago and more than at any other time during the crisis,” said Rajasingham. "About one million of them are severely food insecure — twice as many as last year — and we expect this number to increase."

On the political front, Khawla Matar, deputy special envoy for Syria, said there is "moderate progress" by the Syrian Constitutional Committee, established by the UN Special Envoy for Syrians allied with both the government and opposition groups to chart constitutional reforms, while noting that “the constitutional track alone cannot resolve the crisis."

Sultan Al-Kanj reports from Idlib, a flashpoint for possible renewed conflict between Russian-backed Syrian government forces and Turkish-backed armed groups and radical jihadis and terrorists, that the spread of COVID-19 in opposition-controlled areas of the country has already exceeded the capacity of the health infrastructure there.

Meanwhile, Syrian women also faced increased violence, one of the side effects of the dislocations and hardships caused by the pandemic and the ongoing conflict. A UN Women’s report documented the increase in domestic violence against women as a result of COVID-19 lockdowns. "Dozens of civil and rights activists held a sit-in Nov. 19 in front of the Palace of Justice in the city of Suwayda southeast of the Syrian capital, Damascus, in protest against the rise of crimes against women and girls that perpetrators have referred to as honor killings," Akhin Ahmed reports.