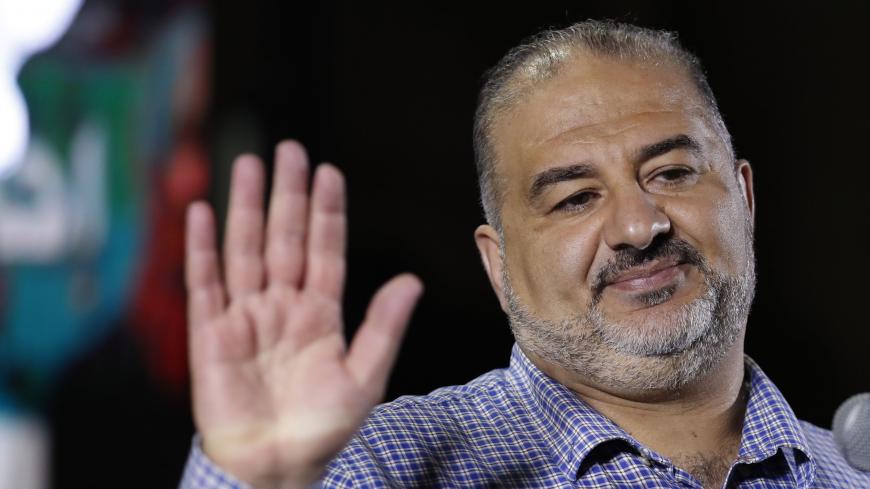 Mansour Abbas, a member of the Arab Joint List alliance, gestures during an electoral campaign rally in the northern Arab Israeli town of Sakhnin on Sept. 15, 2019, two days ahead of the Israeli general elections. - AHMAD GHARABLI/AFP via Getty Images

The number of pieces on Prime Minister Benjamin Netanyahu’s sprawling political chessboard dropped significantly last week. Today, with those pieces gone, so are the number of moves available to ensure Netanyahu’s survival. This all began when former minister Gideon Saar left the Likud to form a party of his own and announced his intent to run for prime minister. By last weekend, Saar had told everyone who interviewed him that he would not sit in a government with Netanyahu under any circumstances. What this means is that the “Anyone but Netanyahu” bloc has grown. Conversely, the prime minister’s chances of having the majority he needs to form his sixth government have dwindled.

This development could have dramatic consequences, especially now, with the clash between the Likud and the Blue and White party ratcheting up a notch, and the government about to fall. Conventional wisdom says that the Knesset will be dissolved by the end of the month and that elections will be moved up to March.

As for Netanyahu, this means that the pool of seats that he would have to form a future government is shrinking. To counter this, Netanyahu has been looking around for some of the strange bedfellows politics is known for. One such case can be found in the common interests he shares with Knesset member Mansour Abbas of the Arab Joint List. The relationship between the two men is becoming critical for Netanyahu’s survival.

Abbas, 47, a dentist, who completed his studies at the Hebrew University in Jerusalem, heads the Ra’am faction within the Joint List party. These days, he is earning a reputation as Netanyahu’s political “Iron Dome” defense system. The close relationship he has been nurturing with Netanyahu has turned Abbas into one of the most influential people in Israeli politics, and one of the most intriguing. On the other hand, several of his Joint List colleagues consider the prime minister as a racist without any inhibitions whatsoever. They would do anything to put an end to his rule, and refuse to accept the ties between the premier and Abbas.

The irony is that Abbas, one of the more anonymous members of the Joint List and ultimately subject to party leaders Ayman Odeh and Ahmad Tibi, has decided to challenge them and the political system in general. The disagreement within the party is so deep that there is a good chance it will split up before the next elections.

As it turns out, Abbas is not willing to “commit suicide.” He knows exactly what he is doing. His approach is backed by the latest polls, which show that most of the Arab population wants to put an end to their political separatism and adopt a more pragmatic approach in dealing with Israeli politics. That is exactly what Abbas is selling them.

Yousef Makladeh is the highly regarded CEO of Statnet, a statistical and strategic consulting firm with expertise involving the Arab public. He said, “Over 60% of the Arab population supports the approach taken by Knesset Member Mansour Abbas, who argues that Arabs can form a coalition with the Israeli right. … There is no doubt that the Joint List will break apart if the electoral threshold is lowered. If that happens, Mansour Abbas’ Ra’am faction will run independently. A majority of the Arab public supports the peace agreements with the Gulf States.”

Abbas makes no effort to hide his relationship with Netanyahu. On the contrary, he claims that it is based on mutual interests. Over the past few weeks, the Knesset has been waiting to approve a 500 million shekel budget to fund a comprehensive plan to deal with the deepest problems facing Arab society in Israel, including crime and the lack of construction permits. As head of the Knesset’s Committee to Eliminate Crime in the Arab Sector, he has been pushing this plan for Netanyahu's approval.

Apart from the budget, the most significant element of the plan is lifting many of the obstacles and red tape preventing new construction in the Arab sector. These have led over the years to the expansion of illegal construction in Arab towns and villages. The plan also targets crime, which has reached, over the past few years, epidemic proportions in Arab society. If the plan is approved, it is thought that Abbas would be able to quit the Joint List and present Arab voters with these important achievements, claiming that he — and he alone — is behind them.

Acting behind the scenes, Netanyahu has been pushing for the plan to be approved before the current Knesset is dissolved. Though everyone knows that this is all part of a deal with Abbas, it is hard to imagine a Knesset member from the left opposing a plan that would benefit the country’s 2 million Arab citizens. This is especially true of the Arab Joint List members. They would be shooting themselves in the foot if they opposed it.

The other members of the Joint List may be furious at Abbas, but they are helpless to do anything about his independent actions. Compounding their hard feelings is Abbas’ unapologetic approach. He doesn’t hide anything. In fact, he is very open about what he is doing.

Abbas has become a media darling in all the most important news studios in Israel and a guest on the most popular talk shows. He even gave an interview to the right-wing Channel 20, which is closely identified with Netanyahu. In each appearance, he makes a point of stressing that he and Netanyahu have a relationship based on common interests, just as politics should be. “Netanyahu tries to take advantage of me, but I do the same to him,” he says repeatedly. He adds that he is ridiculed for being “Netanyahu’s next victim,” with people warning him that the prime minister is just using him to break up the Joint List.

The relationship between Abbas and the Joint List is challenged every time he makes comments like these. Its members never imagined that such a drab and unmemorable member of their party would make such earthshaking moves. He embarrassed them during the last few weeks by inviting Netanyahu to be a special guest at a meeting of the Committee to Eliminate Crime in the Arab Sector. At the session, Abbas treated Netanyahu respectfully and granted him precious time to address the members.

What made it all the more unusual is that Netanyahu rarely attends meetings of the Knesset’s committees in general. This time, however, he made the effort, despite the coronavirus restrictions. Addressing the meeting via Zoom, he spoke about the need to pour funding into Arab towns and villages. Anyone watching from the side would have concluded that Abbas was the main beneficiary of the prime minister’s appearance. He was able to prove that his relationship with Netanyahu is genuine. Then again, Abbas can’t really claim this as a victory until the plans are finally approved and the funding starts pouring in.

Furthermore, Abbas was absent when the Knesset voted to form a special committee to investigate the submarine scandal. The proposal was initiated by the prime minister’s opponents with the intention of embarrassing him. Abbas also voted with the Likud and the ultra-Orthodox, but against the other members of the Joint list, in the vote to dissolve the Knesset. At the same time, he did not rule out supporting laws that would put an end to Netanyahu’s current trial.

When asked in a Nov. 16 interview whether he held a grudge toward Netanyahu over his election campaigns against the Joint List, Abbas answered, “I keep my feelings and my pain locked up in my heart. In the meanwhile, I am trying to spearhead a process that will bring about change.”

Now it is up to Netanyahu to prove he is up to his word. If the plan to benefit Arab society is approved and the money budgeted for it is allocated, Abbas will have won a major victory on his way to an independent run for the Knesset. Support from Arab members of Knesset would, in turn, provide Netanyahu with greater room to maneuver. As for his own camp, the prime minister will surely find the way to market this move to the Israeli right.