Head of Ra’am Party Mansour Abbas and members of the Arab Joint List now have the power to decide what the next government will look like. 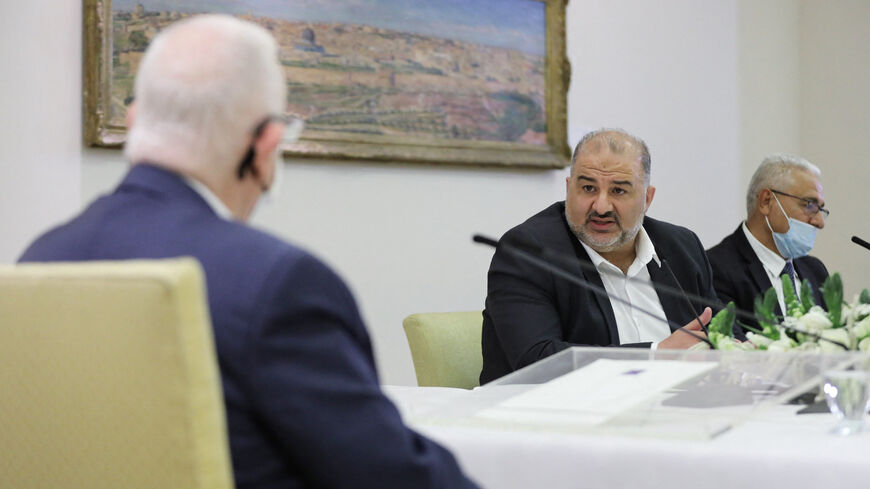 Israeli Arab politician and leader of the United Arab list Mansour Abbas (C) attends consultations with Israeli President Reuven Rivlin (L) on who might form the next coalition government, at the president's residence in Jerusalem, on April 5, 2021. - ABIR SULTAN/POOL/AFP via Getty Images

These are very turbulent times for the Arab political leadership in Israel. They are very historic times too. For the first time in Israel’s 73-year history, Arab Knesset members will likely have the final say on whether a government is formed and even on who will head such a government.

In the current Israeli parliament, there are 10 Knesset members representing Arab parties: The Joint List (a unified slate of predominantly Arab parties) has six (including one Jewish member), and the Ra’am Party headed by Mansour Abbas has four. The two parties are now in the enviable position of being courted more than any other party in the Knesset, but with this comes a number of principled dilemmas. And it goes without saying that there is the inevitable infighting over power and prestige that sends tremors throughout the Arab sector.

Before taking a close look at the current situation, a little background is necessary. In 1992, Arab legislators supported a peace government composed by Yitzhak Rabin. But that was very exceptional. Since then, and until the September 2019 election, Arab legislators refused to take part in the political gamesmanship. Throughout the years, Arab Knesset members stood out mainly for the way they advocated zealously on behalf of the Palestinian national agenda, thus exacerbating tensions between them and the Zionist parties.

Then came the political blundering of the past two years. A series of futile attempts to take down Prime Minister Benjamin Netanyahu was put in check by the voters’ inability to decide if they wanted to see a government of the left or the right. As a result, the mainstream Zionist parties began seeking to cooperate with the Arab parties.

This search for cooperation began as an act of desperation, but by the last March 23 election, it had become the policy advocated by none other than Netanyahu himself. He was the first to give the signal, and in so doing, granted his imprimatur the possibility of a right-wing “government” with the outside support of Arab lawmakers. It was soon revealed that Netanyahu was acting behind the scenes to foster a close relationship with Mansour Abbas of Ra’am and got him and his faction to vote in support of various Knesset initiatives. By then, all the political players realized that no matter which party eventually forms a government, it will need the support of one or both of the Arab parties.

In fact, Abbas realized this even before the last March election and was quick to take advantage of it. First, he quit the Joint List and launched an independent campaign as head of the Ra’am Party. Then he did what no other Arab party leader had ever done before: He made a bold announcement that he was interested in cooperating with any government that is formed. In other words, he would not rule out cooperation with either side in the political divide. This was the major drama of the recent election. Not only was an Arab leader speaking about working together with the Jewish parties for the benefit of the Arab sector. He also refused to rule out cooperating with the Jewish right. Until then, it was a given that Arab parties were part of the left-wing bloc. Because of Abbas, they are now considered to be sui generis and cannot be classified so simply.

This bold act of leadership paid off for Abbas. He walked away from the election with four seats for his party, while the Joint List lost over half of its support, dwindling from 15 seats to six. Abbas was a breath of fresh air in local Arab politics, but he was also a revolutionary, with no qualms about challenging the Joint List.

While Abbas has not ruled out partnering with the right, the Joint List is still struggling to find its own way. They are faced with an agonizing dilemma. They want to see Netanyahu removed from power, but they are having a hard time supporting Yamina leader Naftali Bennett, who is likely to be the premiership candidate of the so-called ‘’Change bloc’’ in case Netanyahu fails to compose a majority government. If Netanyahu fails, Bennett might cut a deal with Yesh Atid leader Yair Lapid for a rotation agreement, with Bennett going first.

Also, it goes without saying that they would have a serious problem with Yisrael Beitenu leader Avigdor Liberman, another senior member of that bloc, especially since Liberman spent years claiming that they supported terrorism.

The problem with Bennett is that he is even more of a right-wing ideologue than Netanyahu. He supports the annexation of the settlements and the struggle against the eventual creation of a Palestinian state. Yet, if he should form a government, it will need the Arab parties to support it from the outside.

“We will not replace Netanyahu with Bennett,” Joint List Knesset member Aida Touma Suleiman said recently. She said it would just be more of the same, but with a different name: “I think that what we really want to change are the problems that Netanyahu represents and his overall political agenda.” Under no circumstances would her party support a government headed by Bennett.

Ofer Kassif, the sole Jewish member of the Joint List, also said that he would veto Bennett. As he explained, “What do we stand to achieve if we replace Netanyahu the man, only to get the same policies, positions and objectives? We were never part of the ‘Yes, Netanyahu; No, Netanyahu’ debate. We are not rejecting Bennett as a person. We reject his policies and worldview. Bennett would not change anything that Netanyahu already did. On the contrary, he will continue with the same settlement policy, and he will encourage racism and anti-Arab violence.”

In contrast, Abbas is continuing with his pragmatic approach by refusing to reject any candidate, including Bennett. He recently proved that he is in no one’s pocket, as he repeatedly claimed, by voting against a Likud proposal for controlling the new Knesset Arrangement Committee. This was a devastating blow to Netanyahu.

As a frequent guest on TV news shows, Abbas says that he does not reject the idea of a government led by Bennett, and he will give his support to whichever candidate meets his demands. While Abbas has yet to release these demands, it is believed that they involve significant budgets to reduce the gap between Arab and Jewish towns and villages, as well as important positions in the Knesset’s various committees. “We maintain the same position,” said Abbas calmly after causing Netanyahu’s Arrangement Committee proposal to fail. He also took advantage of the situation to attack his former colleagues from the Joint List, saying, “Yesterday’s choice wasn’t between two blocs. It was a choice based on our own position.”

It is still too early to determine how it will all end. One thing is clear, however. An exciting historical development is unfolding right before our eyes.