An Israeli court’s decision against Arab children demanding to be reimbursed for traveling to a distant Arabic-speaking school illustrates the dangerous implications of the 2018 nationality law. 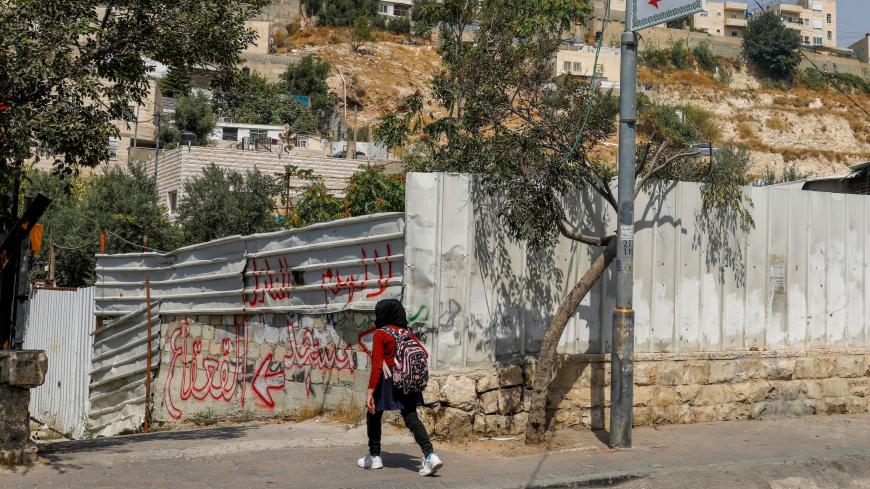 A Palestinian girl walks toward an alley leading to the Qaqaa Bin Amr Mosque in the mostly Arab east Jerusalem neighborhood of Silwan, on Sept. 15, 2020. - AHMAD GHARABLI/AFP via Getty Images

Israel’s 2018 nationality law anchored the Jewish character of the state of Israel. It was first introduced by the Likud and by a few Knesset members of centrist Kadima in 2011, but many legislators were against it, protesting that it discriminated against Israel’s Arab and Druze citizens and also Palestinians. Two years after its adoption, the law continues to evoke bitter debate. In a recent case concerning Arab-Israeli children living in the Jewish-majority town of Carmiel in the Galilee, a judge ruled recently on a petition calling for reimbursing travel to an Arabic-speaking school that the "Jewish character" of Carmiel must be preserved.

The Carmiel case illustrates the fears expressed by the law's opponents. They predicted that it would formalize inequality and discrimination against non-Jewish minorities, including in matters of housing and places of residence.

During the year-long legislative process, the original language of the law was toned down. It no longer said that preference would be given to the creation and support of developments for Jews, since Israel is the home of the Jewish people. The final approved version says, “The state views the development of Jewish settlement [not a reference to the West Bank outposts] as a national value and will act to encourage and promote its establishment and consolidation.”

Adam Shinar of the Interdisciplinary Institute in Herzliya concluded that this section of the law is “not only symbolic, providing a basis for discrimination." He went on, "The value of settlement could already be found in the Declaration of Independence and in documents dating from even before the establishment of the State of Israel. What it says here is that only Jewish settlement has a value (discriminating against all the non-Jewish communities, such as the Druze). Does this mean that the state can only establish new settlements for Jews? Can it limit financial incentives to settle in a specific area to Jews only? That’s a big question. The priority is promoting settlement by one group at the expense of other groups. In a state with limited resources, promotion of one thing will come at the expense of others.”

But there were other readings of the law. Deputy Attorney General Raz Nizri determined during a Knesset debate that the clause does not offer any legal or constitutional basis for the establishment of settlements based exclusively on the residents’ Jewish nationality. He contended the statement is only symbolic.

Back to the Carmiel case. On Nov. 30, Judge Yaniv Luzon of the Krayot Magistrate Court used the same article to throw out a lawsuit brought by two Arab children who live in the town of Carmiel. The plaintiffs, brothers ages six and ten, sued the city for the cost of transportation to the faraway schools that they must attend since there is no Arab-language school in Carmiel proper.

Explaining his decision against the plaintiffs, the judge wrote, “The construction of an Arabic-language school or providing transportation for Arab students, wherever and for whoever wants it, could change the demographic balance and the character of the city.” Citing the nationality law, the judge said, “The development of Jewish settlement is therefore a national value, one anchored in a basic law. It ought to be an appropriate and dominant consideration in the array of municipal considerations, including for the establishment of schools and funding transportation.”

Most Arabs in Israel live in towns and cities that are exclusively Arab. A small number lives in historically mixed cities such as Haifa, Acre, Jaffa, Ramle and Lod. Still, a growing number is moving to cities that until recently were exclusively Jewish. One such city is Carmiel. The town was established in 1964 on land expropriated from nearby Arab towns and villages. The city expanded over the years, with the explicit intention of bringing Jews to the Galilee, which then had a growing Arab majority.

Today, Carmiel is home to some 46,000 residents, including about 2,500 Arabs. Still, it has no Arabic-language school. Of the more than 500 Arab students in Carmiel, about 150 attend Jewish schools, while the remainder attend schools elsewhere. The Ministry of Education does not obligate local authorities to fund the transportation of students to schools outside of its jurisdiction unless there is no alternative among the schools in its jurisdiction. Arab parents claim that the lack of an Arabic-language school is sufficient grounds to fund transportation for their children, while the municipality claims that it is not.

“I never expected to encounter this kind of racism under the protection of the law,” said Qassem Bakri, the brothers' father. “I fear that this is the first indication of the consequences of this racist and nationalist law, and a foreboding indicator of what will happen to Israel’s Arab citizens. The excuse that this is a Jewish city, as if Carmiel has no other residents. There are Class A residents and Class B residents. It is the fetid consequence of [Prime Minister Benjamin] Netanyahu and his nationality law.”

Attorney Nizar Bakri, who filed the civil suit on behalf of his nephews, said that he has been an attorney for 12 years. The part of the ruling that cited the nationality law gave him the shock of his career. “The right to live somewhere is a basic right. No one should be afraid that their free choice of where to live will have racist repercussions based on nationality or anything else, for that matter. Of course, we will consider our next steps and appeal the decision. We also plan to join the lawsuit against the City of Carmiel and the Ministry of Education in order to bring about a thorough solution to this issue for all Arab citizens, and not just individual families,” he said.

On the other hand, Barak Medina, rector of the Hebrew University and professor of constitutional law, told Al-Monitor that the ruling is not based on the nationality law per se. The law was rather an end note tacked on to the ruling and not integral to the decision.

Next month, the Supreme Court will hear several cases brought against the nationality law. Attorney Nariman Shehadeh Zoabi from the Adalah Legal Center for Arab Minority Rights said that the Carmiel ruling shows how necessary it is to overturn the nationality law, which grants legitimacy to racist and discriminatory policies.

The Supreme Court will need to determine whether the attack on equality inherent to the nationality law is justified by Israel being defined as the state of the Jewish people.