On the backdrop of announced fourth elections, right-wing circles see the hearing last week on the controversial Nationality Law as evidence that the Supreme Court leans toward the left. 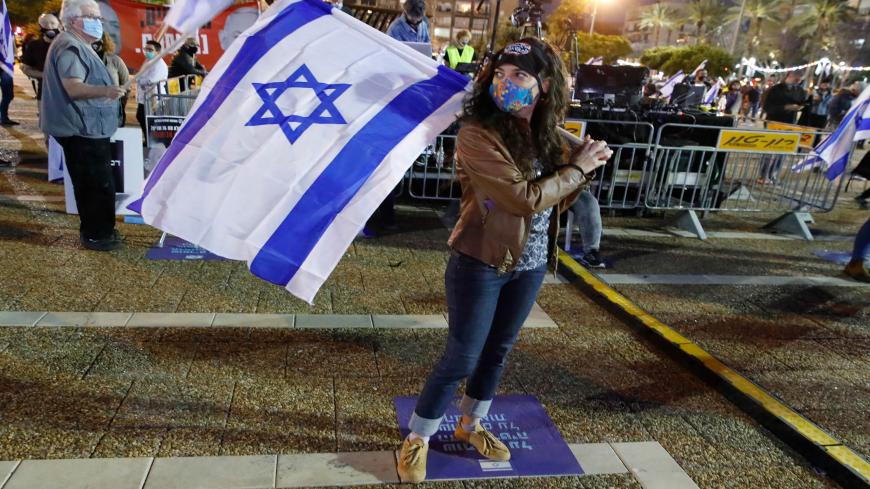 An Israeli woman wearing a protective mask carries a national flag as she takes part in a demonstration in Rabin Square, in favor of the Supreme Court to consider tomorrow to block the coalition government agreed between Prime Minister Benjamin Netanyahu and his rival-turned-partner Benny Gantz, Tel Aviv, Israel, May 2, 2020. - Jack Guez/AFP via Getty Images

It was not business as usual in the Supreme Court Dec. 22. In fact, it was one of the most unusual cases ever taken on by the court. At the center of the hearing was the Nationality Law, passed by the Knesset just two years ago after years of controversy. It anchors the Jewish character of the State of Israel.

But more so, the hearing was unusual because it focused on a Basic Law. Israel has no constitution; thus, Basic Laws have the status of constitutional amendments. Proposed bills at the Knesset must not contradict Basic Laws, and the Supreme Court had never repealed one.

The very fact that the hearing took place at the height of the longest and most serious constitutional crisis in all of Israel’s history — and on the day that the government fell and the Knesset was dissolved for the fourth time in two years — added another dimension to the crisis.

The seriousness of the event could also be seen in the unusual makeup of the bench. The hearing took place before an expanded group of 11 justices, presided over by President of the Supreme Court Esther Hayut. They are slated to rule on 15 petitions submitted by representatives of the country’s Druze community, civil rights groups, left-wing politicians and academics. All these groups petitioned the court to overturn the law, claiming that it discriminates against Israel’s non-Jewish citizens and poses a mortal threat to Israeli democracy.

Broadcasting the hearing live on the country’s court website means that thousands of citizens will have the opportunity to follow the legal drama directly as it unfolds.

Legal experts agree that the chances of the court overturning a Basic Law passed by the Knesset are slim. On the other hand, the very fact that the court took up the issue instead of rejecting it out of hand is, in itself, a sensational development.

As would only be expected, the hearing has already come under harsh criticism from the right, and particularly from the Likud party, which led the efforts to get the law passed. Party members still consider it one of their most important achievements.

Exacerbating the tension was the speaker of the Knesset himself, Knesset member Yariv Levin. Not only is he a senior member of the Likud and the party member closest to Prime Minister Benjamin Netanyahu, he is also one of the legislators who spearheaded the efforts to get the law passed. On the morning of the hearing, he sent a sharp letter to Hayut, demanding that she put a stop to judicial intervention in a Basic Law. In it he wrote, “The very fact that a hearing is taking place in the Supreme Court on matters of Basic Laws is a contravention of the most basic democratic principles of the sovereign power of the people and the separation between powers.” As if that was not enough, the speaker also warned the Knesset, “Any decision reached by the court that constitutes intervention in the workings of the Knesset will lack all authority and all validity.”

Netanyahu was also critical of the very fact that the law was being subjected to a hearing. In a special statement, he said that the court “has no authority to debate the validity of Basic Laws. … Differences regarding the law’s content were already settled in the appropriate place for that, i.e., the Knesset. The political position of the [Arab] Joint List has already been heard during the debates in the Knesset. As such, there is no place for this hearing before the Supreme Court at that party’s request.”

The controversial law, which has been criticized by the international community, was passed on the night of July 19, 2018, during Netanyahu’s fourth government, which then had a clear right-wing majority. That night, the Knesset formalized the status of the State of Israel as the nation-state of the Jewish people in a Basic Law. The law also said that the right of self-determination in its homeland is exclusive to the Jewish people and ratified the status of various state symbols. Similarly, it stated that Jerusalem is the capital of Israel and that Hebrew is the country’s official language. It also formalized the status of Jewish settlements in the country — as in establishing new Jewish towns and villages, not in the West Bank context — as a national value and established the constitutional standing of the Hebrew calendar as Israel’s official calendar. By extension, this means that Independence Day and Jewish festivals and memorial days are to be considered national holidays.

Parties on the left joined Arab Knesset members in protesting the new law, claiming that it echoed of apartheid. This was the beginning of the political and legal battle to have the law overturned.

Several cases were brought before the Supreme Court shortly after its legislation, but it was only last week that hearings began. It agreed to rule on the various petitions, despite the position of Attorney General Avichai Mandelbit that there is no role for judicial intervention in legislating a Basic Law. Supporting the law itself, Mandelblit also wrote that while it gives “constitutional attire” to Israel’s Jewish identity, it does not “detract from the individual rights of every person in the State of Israel, regardless of religion or nationality.”

Why, then, wouldn’t the court reject the very notion of debating a Basic Law in the first place? It seems as if the justices intended to use the sessions interpret the Nationality Law in such a way that would provide a legal basis for future rulings on questions of equality and discrimination.

The real issue is that this is an unusually sensitive time politically. The country is already facing an enormous constitutional crisis, pitting the right against the legal system. Under these circumstances, it would seem inevitable that right-wing circles would see this hearing as evidence that the Supreme Court leans toward the left.

Exacerbating this even further is Netanyahu’s personal trial for bribery and corruption, which is a constant presence in the background. And there is the Knesset’s stated intention to pass legislation in the next Knesset, which would allow the legislature to relegislate laws overturned by the Supreme Court, even though this would effectively override the authority of the highest court in the land. This legislation, in fact, be a banner issue in the Likud’s campaign: “Give us the power to prevent the Supreme Court from ruling the country.”

As Israel faces its fourth election in two years, it seems obvious that Netanyahu and the Likud will use the very fact that the Supreme Court has taken up the Nationality Law as incontrovertible evidence that the highest court is interfering excessively with the legislative branch of government. The message will stoke claims that Netanyahu is being persecuted as part of a larger effort to bring down the right and prevent changes to the legal system.

In other words, the Supreme Court will have no choice but to become a key player in this election. It will be portrayed as fighting to preserve its exaggerated sense of power and entitlement, at the expense of politicians elected by the public, which should constitute the very essence of democracy and the principle of the separation of powers.

The center-left parties will then wage a countercampaign, claiming that they are the ones who are protecting democracy. Blue and White party Chairman Benny Gantz, who is the country's defense minister, already said, “Threats by Yariv Levin and Netanyahu against the Supreme Court are dangerous to democracy because they dismantle the separation of powers. They have not succeeded in doing that until now, and we will make sure that they do not succeed in the future.”