For Prime Minister Benjamin Netanyahu and Knesset Speaker Yariv Levin the time has come for a last, decisive duel against the High Court. 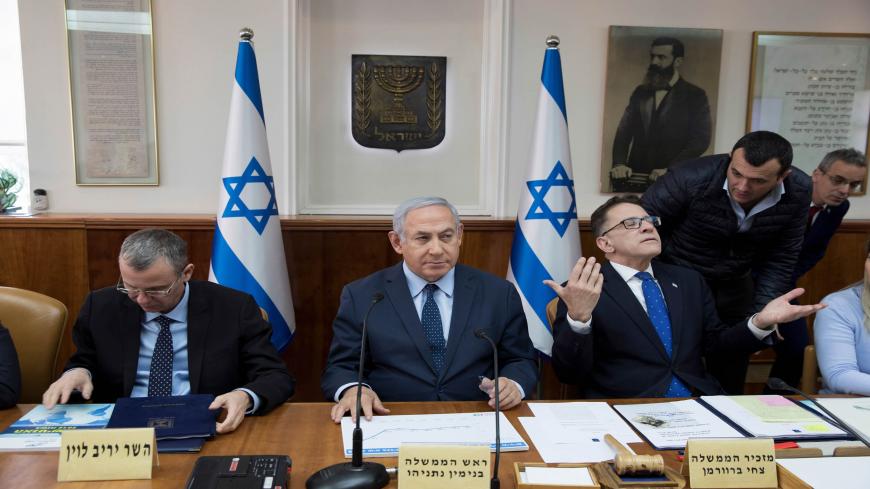 About a decade ago, when Knesset Speaker Yariv Levin was still a new Likud Knesset member, he created big headaches for Prime Minister Benjamin Netanyahu.

As a jurist by profession and a diligent member of the Knesset, Levin was the Likud's most energetic member in the struggle to limit the powers of Israel’s Supreme Court. At the base of his agenda was the claim that a small, left-wing minority had taken control of the Supreme Court and was trying to impose its left-wing values on the entire society. Levin, together with other Knesset members, tried to introduce new laws aimed at limiting the powers of the justices of the High Court. But ultimately it was Netanyahu himself who blocked these initiatives from behind the scenes.

Levin now serves as Knesset speaker, and is one of the most popular and high-ranking of the Likud members. He is also a politician held in high esteem by the prime minister. Ever since Netanyahu was faced with legal entanglements, he has stopped preventing Levin from excoriating the legal system and the High Court, and has even adopted the same worldview himself.

The Knesset speaker holds one of the most powerful, high-status positions in Israel’s government; in fact, it is viewed as one of the symbols of office — a government icon. This, however, has not caused Levin to curb his declarations. In fact, the opposite is true.

On Sept. 3, at a Law Conference of the Bar Association, Levin accused the High Court of inappropriate and dangerous interference in the work of the Knesset. “There is an attempt here to take a certain worldview and impose it on the general public in an undemocratic way," he said. Levin also said that the method of choosing justices for the High Court is a “distorted” one, in which “one friend brings another.”

True, Levin did not explicitly mention Netanyahu’s trial — which in the past he had described as one of the low points of the justice system. However, the hint was clear.

Esther Hayut, chief justice of Israel’s High Court, spoke after Levin and responded with an attack of her own, saying, “True, criticism of others is, of course, legitimate. However, when it is expressed by a highly placed government servant, we expect it to be fair, impartial and not populistic. … Unfortunately, the words uttered by the Knesset speaker do not meet these requirements — not with regard to content nor to style. His words lack all impartiality.” Although Hayut did not specifically mention Netanyahu’s trial either, it was clear that there was an elephant in the room.

As it was, this public confrontation between the Knesset speaker and the chief justice of the High Court did receive little media attention — it was overshadowed by coronavirus pandemic announcements Sept. 3 of 3,000 infected Israelis in the last 24 hours. Otherwise, the confrontation would have remained in the public agenda much longer.

Levin is no back-row Knesset member nor mere talk-back expert; he is the Knesset’s top member, its very representative, and he refuses to waive the laws created to limit the powers of the country’s legal authority, the judiciary. Hayut is well aware of this. In Israel’s entire history, there has never been a period of such epic clashes and confrontations between Israel’s Knesset and its judiciary as this year.

Levin’s agenda, once viewed as extreme in the Likud, has now become a leading program. Almost all high-level members of the party, on one level or other, support the Override Clause legislation — a law that would allow the Knesset to relegislate laws passed by the Knesset that were invalidated by the High Court.

On Sept. 1, it was Minister of Public Security Amir Ohana who accused Attorney General Avichai Mandelblit of trying to bring about Netanyahu’s political demise. In an interview, Ohana — who, like Levin, is a jurist by profession — said that Mandelblit’s entire political future rests on bringing Netanyahu down. He said, “Should Netanyahu be acquitted, Avichai Mandelblit will not be able to remain in public life one minute longer. It would be a sign of Cain that will never be forgotten — after the damage he inflicted on our country.”

These words also create the impression that Netanyahu is the man behind them, due to his court case. There is no doubt that the prime minister is the engine leading the current agenda, the presenter. But it is also true that there is another element at work: the legal activism of Israel’s High Court. Netanyahu adopted these views due to his own experience with the legal system, and his belief that he is being persecuted by it. Then, due to the prime minister’s public popularity and political power, he was able to convince the Likud members.

It is a circular process: The more that Likud voters become convinced that the legal system is of a left-wing orientation and has too much power, the more that Likud Knesset members adopt this view, although they did not do so in the past.

We also see that the more this agenda seeps down to the level of the junior Likud members, the less “polite” it sounds. Likud Knesset member Shlomo Karhi, with an engineering doctorate, jeered Hayut’s words that she had uttered at an attorney’s conference: “Law conference? It’s a conference of Israel’s disconnected juridical oligarchy. Zero self-critique, only their opinions count for anything. Our goal should be clear: We must shatter the legal junta that exists today, and reestablish it from the ground up. Cleaner, more transparent and subject to the law and the decisions made by the people.”

That is exactly the concern and worry of the legal system and the High Court — that talks and planned programs will ultimately become laws. Therefore, what we are witnessing is a fateful battle being waged between two titan systems — a battle only likely to gather strength when Netanyahu’s trial reaches its decisive stages.

In another four months, we will reach the "evidence stage" in Netanyahu’s bribery trial that will be conducted three times a week. Netanyahu has long since decided to wage a public trial, simultaneous with the criminal proceedings, to “prove” that he is being unjustly persecuted.

The flaws of the legal system — a system that enjoyed prestige and supremacy in the past — have been rising to the surface. Even the discourse on the excessive authorities of the High Court are not disconnected from reality: There are many honored legalists who claim the very same thing. Netanyahu saw this and is using all his talents — rhetorical, political and marketing skills — to fight the ultimate battle for his political life. With regard to Levin and those associates who share Levin’s worldview, this confrontation represents the perfect political storm.