Sisi brushes off possibility of military action in Libya

Egyptian President Abdel Fattah al-Sisi stresses that Cairo seeks an all-inclusive political solution to the Libyan crisis, casting aside reports of a military confrontation against Turkey on Libyan soil. 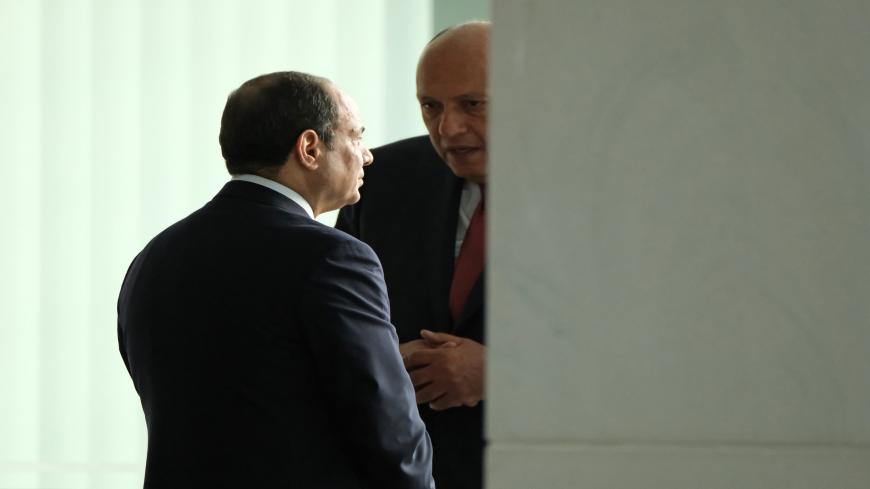 CAIRO — Egypt’s President Abdel Fattah al-Sisi said Dec. 9 that his country is working toward a comprehensive political solution to the Libyan crisis.

In an interview with the French paper Le Figaro, Sisi responded to a question on a potential military faceoff between Egypt and Turkey in Libya, saying, “Egypt will never initiate an attack. Yet [Egyptian] troops are always ready to defend their homeland and ensure its national security in the face of any form of confrontations or threats.”

He said, “Egypt is working toward a comprehensive political solution, which remains the only possible path to settle the Libyan crisis and to bring about stability to this brotherly country that shares with Egypt an 1,200-kilometer-long [746-mile-long] border. It is imperative to end foreign intervention that has threatened Libya’s stability with the presence of mercenaries and the proliferation of weapons among extremist militias."

Sisi added, “The Egyptian policy consists of building excellent relations with its neighbors through dialogue. Turkey, like any other country in the region, must abide by international law and the law of the sea and refrain from taking any unilateral action in the absence of consultations or at the expense of the region’s security and safety.”

In this context, Maj. Gen. Gamal Mazloum, former director of the Egyptian Armed Forces Center for Strategic Studies, told Al-Monitor that Sisi had made suggestions to reach a peaceful solution to the Libyan issue during the visit to Cairo of the head of the Libyan Tobruk-based parliament, Aguila Saleh, and eastern military strongman Khalifa Hifter. Back then, Mazloum noted, the military operations between Hifter’s self-proclaimed Libyan National Army (LNA) and Turkish-backed government forces were escalating and the LNA withdrew from the Sirte-Jufra frontline. Sisi warned that the Libyan provinces of Sirte and Jufra are a “red line,” as he considered the advances of the Turkish forces, extremist militias and mercenaries a threat to Egyptian security and stability since crossing this red line would put these forces closer to the Egyptian territories.

Mazloum believes Egypt does not have interests in Libya as it only seeks for the Libyan state to be strong and stable and does not pose a threat to the security and stability of the country. He noted that Cairo would not launch an attack inside Libya, stressing that what is happening in Libya is an internal affair. He further said that Egypt is in favor of a peaceful solution, a unified government and the absence of any divisions, and it will neither allow foreign intervention in the Libyan affairs nor the depletion of the country’s resources.

Mazloum added that a number of Libyans left their homeland and abandoned the Libyan cause, siding with Turkey. He accused the Muslim Brotherhood of playing a role in the Libyan crisis by supporting mercenaries and militias. He called on Libyans to solve their problems without any foreign interference that poses a threat to neighboring countries.

Regarding the situation in Libya, Mazloum said, “I believe that there are difficulties when it comes to solving the Libyan crisis due to the lack of agreement among the parties. On the military level, the 5+5 Libyan Joint Military Commission [which includes five senior officers from both sides] have held fruitful talks that led to stability in the country, as no aggression has been reported [so far]. Yet on the political level, I believe the situation inside Libya is stalling, and I hope it will not lead to renewed fighting.”

Hurriya Mujahid, a professor of political systems at Cairo University, told Al-Monitor that throughout history Egypt has never initiated any attack, but has always pursued a policy of protecting its border.

She said that Cairo has played the role of mediator to calm the situation and bring balance in the region, and that is why it does not accept any attack to take place in Libya.

Mujahid believes Turkey, for its part, will appease the situation in the coming period in light of the US and EU sanctions, since the Turkish economy has been badly affected.

Karam Saeed, an expert on Turkish affairs at Al-Ahram Center for Political and Strategic Studies, told Al-Monitor that Sisi’s remarks on a military confrontation against Turkey come in the framework of the tension between the two countries, in light of their differences on a number of issues in the region, including the Muslim Brotherhood, the Libyan crisis, as well as Syria, Yemen, Sudan and the Horn of Africa.

“Although some consider that Sisi’s remarks point to Cairo’s readiness to engage in a military confrontation with Turkey, I believe signs on the ground indicate otherwise. There has been a change in the Egyptian-Turkish relations, which was made clear in recent statements by Turkish officials, including the adviser to the Turkish president, Yassin Oktay, who spoke about the importance of relations with Egypt and praised Egypt’s 'great' army. For his part, Turkish President Recep Tayyib Erdogan talked about cooperation between the two countries and called for ending the differences between the two,” Saeed said.

He added that Turkey is aware of the Egyptian position on Libya, which is strategically important for Cairo. This is why, according to Saeed, Turkey did not cross the Sirte and Jufra red lines that Sisi had warned against in June.

Saeed said there are three scenarios when it comes to the Egyptian-Turkish relations. The first scenario is a comprehensive improvement in relations and the return of diplomatic ties, whether at the ambassadors’ level or the heads of states. That is, however, ruled out given the lack of any practical measures that would solve them, he said.

The second scenario, according to Saeed, would be to maintain the current status quo, as tension continues and statements and counterstatements are ongoing.

The third scenario, he continued, would be an improvement in the Egyptian-Turkish relations, with a cautious rapprochement. There are signs supporting this scenario, namely Ankara’s positive statements and Cairo’s reaction to it, Saeed said, adding that Egypt is ready to appease the situation, provided that Turkey does what it says.

Saeed said Turkish businessmen have been pressuring the leadership in Ankara to restore ties with Cairo, considering that Egypt is an important outlet for Turkish exports. He also said Turkish opposition parties are calling for better ties with Cairo, as the Republican People's Party called on the Turkish president to abandon his association with the Muslim Brotherhood.