Egypt is gearing up to start a mass coronavirus vaccination campaign, after receiving two shipments of about 100,000 doses of a Chinese vaccine. 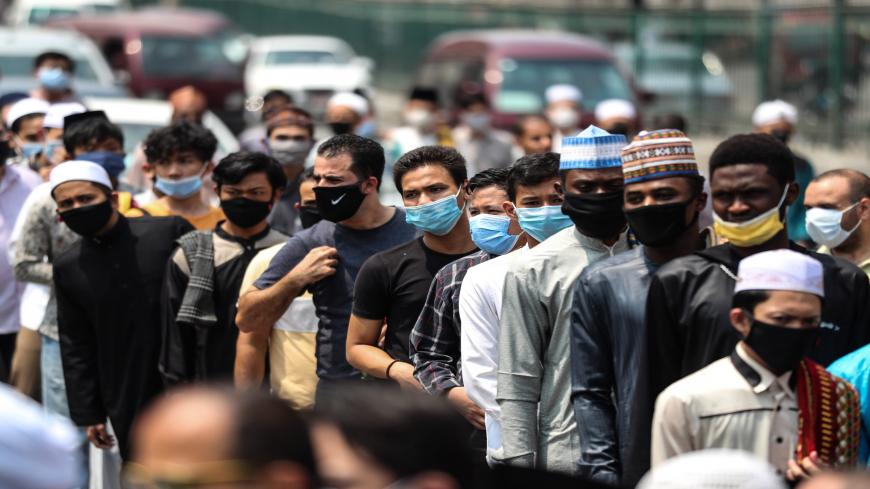 CAIRO — Egypt is preparing for the largest vaccination campaign in its history; the populous Arab country has already received two shipments of a COVID-19 vaccine developed in China.

The shipments, which came from the United Arab Emirates (UAE) on Dec. 10 and Dec. 15, contained 100,000 doses of the Sinopharm vaccine. Other shipments of the same vaccine will arrive one after another, the Ministry of Health said.

Doses within the first and second shipments will be distributed to front-line health-care workers, especially those at the nation's isolation hospitals, the ministry noted.

“These people are the first line of defense against the disease,” Magdi Morshid, member of the Committee on Health at the House of Deputies (lower chamber of parliament), told Al-Monitor. “This is why they must be a top priority for the vaccination campaign.”

The Ministry of Health said subsequent shipments of the vaccine will be given to senior citizens, especially those suffering from chronic diseases. Other members of the public will get the vaccine later, but they have to book their spot on a website to be launched by health authorities soon.

On Dec. 11, President Abdel Fattah al-Sisi ordered the vaccines to be given to the members of the public at no cost.

With a population of 100 million, Egypt needs a huge number of vaccine doses, assuming that all members of the public will want to be vaccinated against COVID-19.

The health authorities are also exploring other options and preparing to get vaccines from other sources, according to Mohamed Awad Tageddine, the president's adviser for health affairs and prevention.

He said at a Dec. 15 press conference that the National Research Center, the main research agency in the country, is also working on the development of a COVID-19 vaccine. The center, he said, would make an announcement about the vaccine when it reaches tangible results.

Health specialists point out the efforts recently made by the health authorities in order to ensure the efficacy of the vaccines that would be given to the members of the public.

“This especially applies to the Chinese vaccine,” Nagwa al-Shafie, a board member of the Medical Association, the independent union of the nation's medical doctors, told Al-Monitor.

Egypt participated in the clinical trials of Sinopharm, along with another Chinese vaccine. Minister of Health Hala Zayed volunteered in the trials.

The Egyptian national carrier, EgyptAir, is making preparations to airlift the vaccines from manufacturing countries. The carrier's officials say they have sufficient aircraft ready to bring the vaccines to Egypt.

“We are ready for transporting the vaccines from any part of the world,” EgyptAir Chairman Roshdi Zakaria told Al-Monitor. He said that apart from the passenger planes prepared for this mission, several cargo planes would be ready to participate in the vaccine airlift if necessary.

EgyptAir noted it has prepared five planes for the process, including two Boeing 777 planes that were out of service. The vaccines will be placed inside refrigerated containers aboard the planes. Upon arrival, the vaccine shipments will go into a freezer farm at the cargo terminal facility of Cairo International Airport.

“We will use refrigerated trucks to transport the vaccines from the airport to the various hospitals and vaccination centers,” Zakaria said.

The emergence of COVID-19 vaccines and the international urge for immunization is an opportunity to assist for the Egyptian national carrier. EgyptAir has incurred 3 billion Egyptian pounds (roughly $190.5 million) in losses since the coronavirus outbreak in the country.

Egypt had to suspend all international flights in March after dozens of tourism workers tested positive for the novel coronavirus. The workers had contracted the disease from a Taiwanese-American tourist.

EgyptAir resumed flights in July, after a four-month pause that proved very costly for the national carrier.

On Dec. 6, Zakaria said his company would be ready to transport the vaccines from manufacturing spots to other countries at their request. “However, we will give priority to Egypt in the first phase of vaccine transport,” a number of local media outlets quoted him as saying.

The national COVID-19 immunization campaign is due to start within the next two weeks, according to Hossam Hosni, head of the COVID-19 Scientific Committee, a panel formed by the president to look into coronavirus containment measures.

Cabinet spokesman Nader Saad said Dec. 16 that Egypt would have half a million doses of the Sinopharm vaccine by the end of the year.

Information about the upcoming mass vaccination campaign comes amid an increasing number of daily infections that has urged the health authorities to take action.

Egyptian hospitals are on high alert with more patients to look after. The daily infection rate has already gone beyond 500, after staying below 300 for over two months, amid expectations that the infections will double and even triple in the coming weeks.

On Dec. 16, the Cabinet decided to maintain the closure of places for wedding parties and funerals. It decided to impose fines on those violating preventive measures, including the wearing of face masks on public transport and in government offices.

In addition, the Cabinet decisions included a reduction of the number of civil servants in all government institutions.

The nation's schools continue to put pressures on preventive measures, including physical distancing and the wearing of face masks by pupils, teachers and administrative staff members.

However, parents are panicking due to possible school infections, especially with limited reports about infections among pupils and teachers in some schools.

Minister of Education Tarek Shawqi said Dec. 14 that his ministry, which regulates the work of the nation's state-run and private schools, would not order the suspension of study at the schools, unless there are strong reasons for this.

On Nov. 21, the Cabinet had warned that the second wave of the coronavirus could be more dangerous than the first wave.

Nonetheless, the arrival of the vaccines is giving hope that the pandemic is on its way out, after killing close to 7,000 Egyptians, devastating the economic prospects of millions of people and leaving a heavy toll on the national economy.

The Ministry of Health has not specified a plan for the distribution of the vaccines yet, but the prime minister asked the ministry Dec. 16 to come up with a plan soon.

Once the necessary vaccines are available, health specialists say, the public can apply and get them.

“However, the arrival of the vaccines does not mean that COVID-19 is over,” Shafie said. “It only means that we are in possession of the means to stop its spread.”