The surge in cases led the government to impose a ban on New Year's Eve celebrations across the North African country. 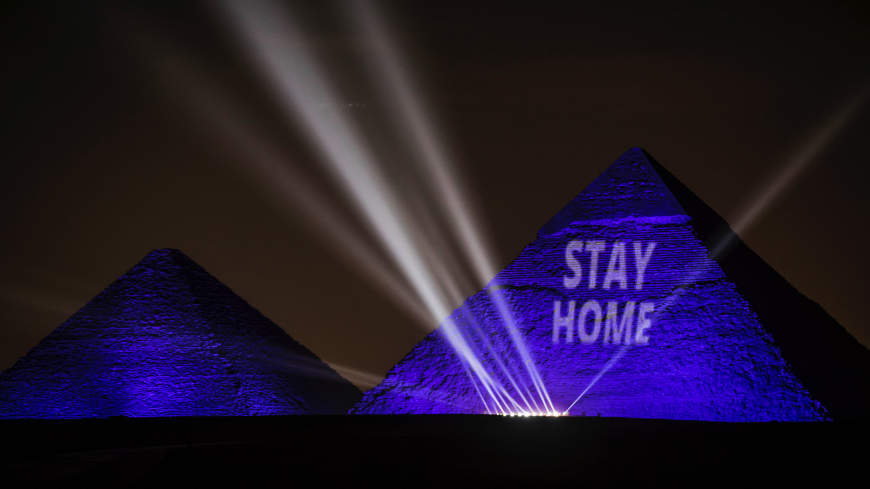 A picture taken on April 18, 2020, shows the Great Pyramids alit with blue light and the message "Stay Home" on the Giza plateau outside the Egyptian capital, Cairo, on World Heritage Day, as the country fights the spread of the COVID-19. - KHALED DESOUKI/AFP via Getty Images

Egypt has recorded its highest single-day COVID-19 count in months, as the government sought to curb infections by canceling New Year’s Eve gatherings across the country.

Health Minister Hala Zayed announced 911 confirmed cases and 42 deaths from the virus on Wednesday, raising Egypt’s total number of cases since the pandemic began to 127,970 and 7,209 deaths. The number of cases has been rising steadily since the end of October and spiked in recent weeks, she said.

In response to the surge, Egyptian Prime Minister Mustafa Madbouly announced a ban on New Year’s Eve celebrations across the country.

"There will be no New Year's celebrations or gatherings as part of the precautionary measures taken to confront the coronavirus," Madbouly said. The Egyptian government is “doing everything it can not to order a complete lockdown to avoid the impact of such a move on the economy and consequently on the livelihood of citizens."

Zayed said the Egyptian government is seeking more vaccines for its population of 100 million. The country is in talks with drugmakers, Zayed said, and has also applied to receive doses through the World Health Organizations’ COVAX initiative.

Egypt is currently conducting tests on the Chinese-made Sinopharm vaccine, which Emirati health officials say has an 86% efficacy rate. Egypt, which received a batch of 100,000 doses earlier this month, plans to provide the vaccine to its citizens free of charge.

The government has also ordered 20 million doses of the Pfizer vaccine, which are expected to arrive in mid-2021. President Abdel Fattah el-Sisi announced last week that Egypt’s main research agency is also working to develop its own vaccine.