Syrian soldiers were reportedly killed when a bus was ambushed in the Deir ez-Zor province. There is significant conflict in the area where Kurdish, government and Islamic State forces all have a presence. 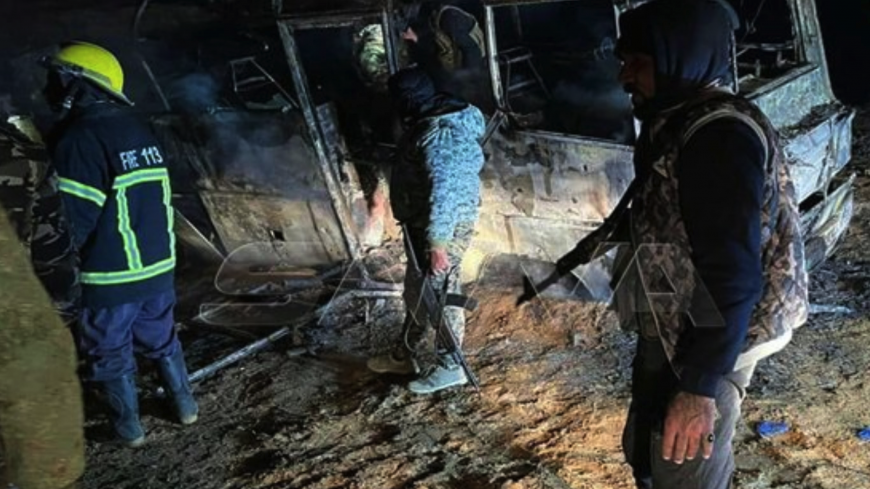 A bus traveling in the Kobajjep area in southeastern Deir ez-Zor province was attacked on Dec. 30, 2020. The Islamic State is suspected of carrying out the terrorist attack. - SANA

Syrian soldiers died in a bus attack in eastern Syria on Wednesday. The region has been the scene of conflict throughout the year.

There are multiple reports on the attack, which reportedly took place near the town of Kobajjep in eastern Deir ez-Zor province. Syrian state-run news outlet SANA reported that a “terrorist attack” on the bus left 25 people dead and 13 others injured.

The pro-opposition Syrian Observatory for Human Rights reported that the Islamic State (IS) ambushed three buses that were carrying Syrian soldiers. Thirty soldiers were killed and 15 were injured, according to the London-based organization.

SANA did not blame the attack on any group. The local news outlet DeirEzzour24 also attributed the attack to IS.

Reuters also reported that the bus was carrying Syrian soldiers. They were traveling to their base after taking leave, a source told the outlet.

The Deir ez-Zor area has experienced much unrest this year. Control of the area is divided between the Kurdish-led Syrian Democratic Forces (SDF) and the Syrian military. In March, Deir ez-Zor residents, who are mostly Arab, protested against SDF arrests, corruption and poor services. There has also been a wave of killings of tribal leaders there this year.

IS remains active in the area and regularly attacks the SDF.

In December, Al-Monitor reported that Syrian government and allied Iran-backed militia forces were imposing royalties on merchants and residents in Deir ez-Zor.