Russia also carried out airstrikes in the eastern Deir ez-Zor province, where the Islamic State has been particularly active recently. 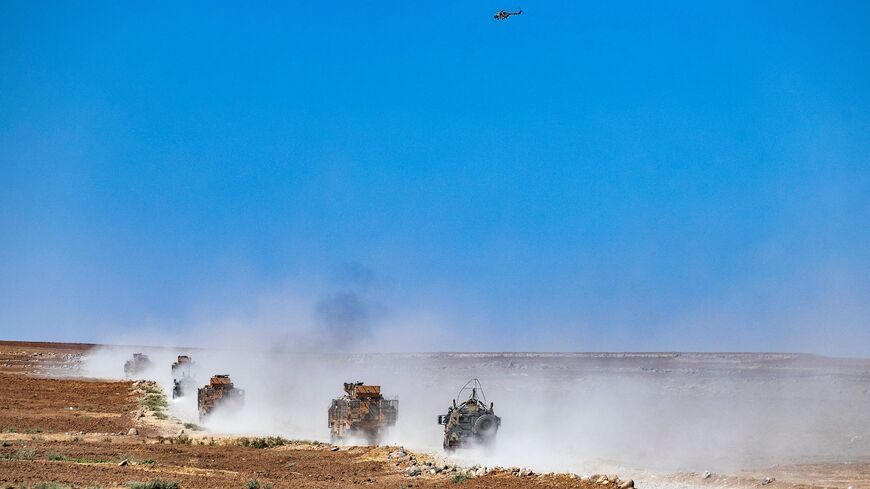 A Russian helicopter hovers as Turkish and Russian military vehicles patrol in the countryside of Rmeilan in Syria's northeastern Hasakeh province near the Turkish border, on Sept. 16, 2021. - DELIL SOULEIMAN/AFP via Getty Images

According to local news reports, an attack occurred in the area of al-Masrib in the west of Deir ez-Zor province. IS targeted Syrian government and allied militia forces, Step News reported yesterday. The Sada AlSharqieh news outlet reported Dec. 11 that seven Syrian regime soldiers were killed during an IS ambush and that clashes between the two continued afterward.

The Beirut-based outlet Al Modon also reported about the Masrib attack yesterday, noting several casualties on the Syrian government's side. The outlet added that a mortar also hit the Russian-controlled Palmyra airport in central Syria, the first attack on the airport since the Syrian government retook it in 2017.

Russian forces are in Syria to help the Syrian government in its war against rebel groups. Russia also conducts operations against the Islamic State. The Palmyra region is of particular interest to Russia, in part due its Roman ruins. Russia began restoring historical sites in Palmyra in November.

There have been several Islamic State attacks in al-Masrib recently. The pro-opposition news outlet Enab Beladi reported an IS attack on Syrian government forces in early December. The Kurdish news outlet Hawar News Agency also noted a desert ambush against government forces there in November.

The Islamic State lost its final territory in Deir ez-Zor in 2019 to the Kurdish-led Syrian Democratic Forces, who are backed by a US-led military coalition. IS remains active in Syria, however, particularly in Deir ez-Zor.