UN warns Yemen at risk of 'devastating famine' within months

The looming famine comes as Yemen records its highest-yet rates of child malnutrition. 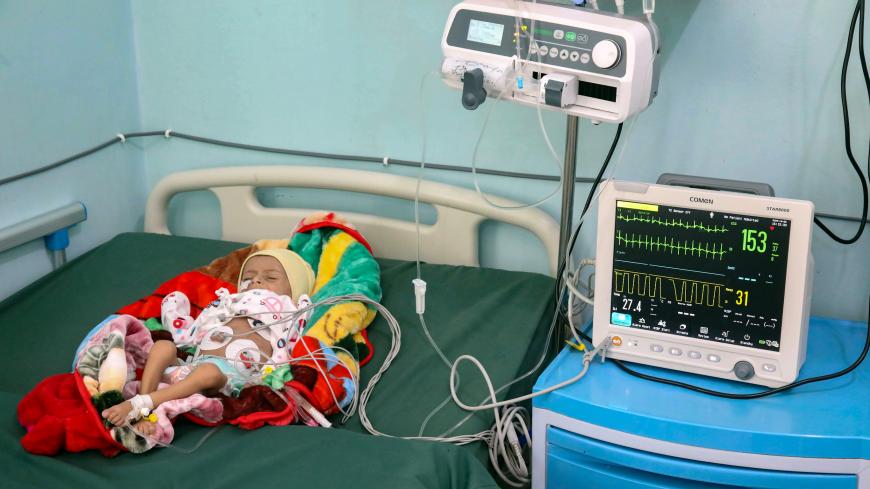 A Yemeni child suffering from malnutrition receives treatment in the city of Taez, on Oct. 28, 2020. - AHMAD AL-BASHA/AFP via Getty Images

Warning that Yemen again faces a looming famine, the United Nations urged donor countries to make good on their funding pledges before a humanitarian catastrophe unfolds in the war-torn country.

“If we choose to look away, there’s no doubt in my mind Yemen will be plunged into a devastating famine within a few short months,” UN food chief David Beasley told the Security Council on Wednesday.

“We have been here before … We did almost the same dog-and-pony show. We sounded the alarm then,” Beasley said, adding, “Quite frankly their suffering is even more pitiful” now.

The nearly six-year war between the Houthi rebels and a Saudi-led military coalition in Yemen has created what the UN says is the world’s worst humanitarian crisis. The grueling conflict has left the country's health care system dangerously overstretched and 80% of the population — some 24 million Yemenis — in need of humanitarian assistance to survive.

Amid the coronavirus pandemic, the rates of child malnutrition are among the highest ever recorded in parts of Yemen. A UN analysis of south Yemen released last month found at least 98,000 children under five are at risk of dying without urgent treatment. Hodeidah’s lowlands are one of the worst-hit areas, with 27% of children considered acutely malnourished.

The dire warnings come as the United Nations grapples with a major funding shortfall that’s forced aid agencies to scale back services or outright shutter their programs in Yemen, the Arab world’s poorest country. The UN appealed for $3.4 billion in humanitarian aid for Yemen this year, less than half of which has been received, UN aid chief Mark Lowcock said.

“Yemenis are not ‘going hungry.’ They are being starved,” Lowcock told the Security Council on Wednesday. “Words like 'acutely malnourished,' 'food insecurity' and 'excess mortality' are dispassionate, neutral, technical terms that obscure the horrors inflicted by famine on the body and on the soul.”

In addition to Yemen, the United Nations says South Sudan, northeastern Nigeria and Burkina Faso are at risk of famine in the coming months. Sixteen other countries are experiencing significant levels of acute food insecurity.