Hunger crisis in Yemen should be a ‘wake up call,’ UN warns

The number of Yemenis experiencing “catastrophic food insecurity” could triple by the end of June 2021. 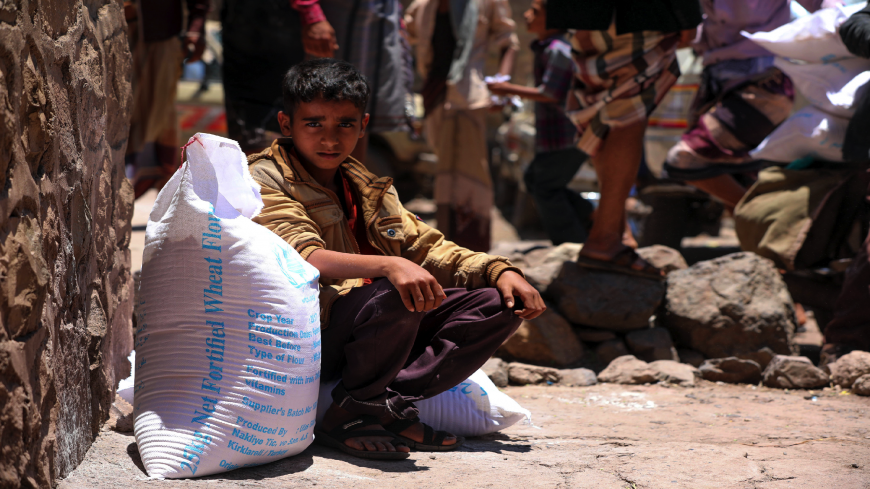 A Yemeni boy receives humanitarian aid, donated by the World Food Program, in the country's third city of Taez, on Oct. 10, 2020. - AHMAD AL-BASHA/AFP via Getty Images)

The window is closing to prevent another famine in Yemen, United Nations aid agencies said on Thursday, as the war-torn country contends with record-high levels of severe hunger.

Some 47,000 people could experience “catastrophic food insecurity” by the end of June 2021 — triple the current number — the Food and Agriculture Organization, the World Food Program (WFP) and the UN children’s agency UNICEF warned.

The aid agencies estimate the number of food-insecure Yemenis at risk of “falling into catastrophic conditions” will increase from 3.6 million to 5 million people in the first half of 2021.

“These alarming numbers must be a wake-up call to the world,” WFP executive director David Beasley said in a statement. “Famine can still be prevented — but that opportunity is slipping away with every day that passes.”

The nearly six-year conflict between the Houthi rebels and a Saudi-led military coalition in Yemen has created what the UN says is the world’s worst humanitarian crisis. The civil war, combined with the effects of the coronavirus pandemic, poor health infrastructure and rising food costs, has left 80% of the population — some 24 million Yemenis — in need of humanitarian assistance to survive.

Children are particularly at risk, the UN warned last month. The rates of child malnutrition are among the highest ever recorded in parts of Yemen, with at least 98,000 children under 5 years of age at risk of dying unless they receive urgent treatment.

Mohamed Abdi, Yemen director for the Norwegian Refugee Council, drew a comparison to Somalia, where a famine killed some 260,000 people in 2011 but the quick intervention of donors in 2018 helped avert another.

“Waiting for a famine declaration to act will condemn hundreds of thousands of people to death,” Abdi said. “Yemen needs a similar injection of aid today to help families survive, together with an end to the conflict and all manmade actions leading to starvation.”

The new figures come as the UN’s Yemen response faces historic funding shortfalls, with donor governments contributing just $1.5 billion of the $3.2 billion the UN says it needs to address the crisis. The funding crunch has forced a number of aid agencies working in Yemen to scale back their assistance or cut their programs entirely.